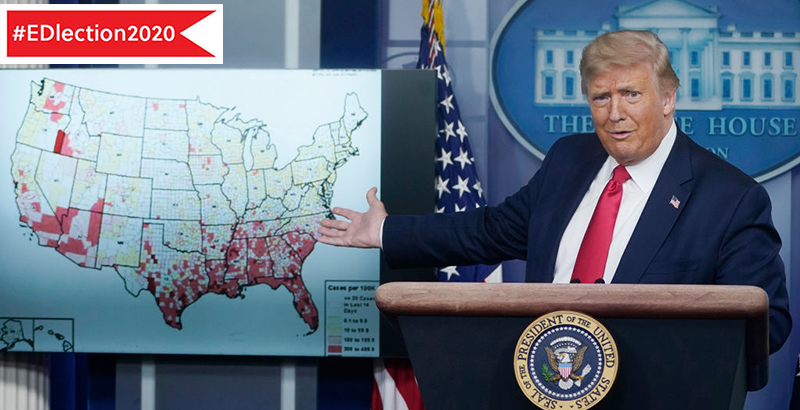 Over seven months after much of society shut down in reaction to the COVID-19 pandemic, there is no uniform policy guiding school districts through the return of tens of millions of students to in-person education. In most jurisdictions, officials have spent the last few months balancing risks and responsibilities, resulting in millions of American students returning to the classroom even as millions of their peers still spend their days in front of a screen.

According to a growing number of education commentators, one major factor determining school reopenings is politics. In comparing how districts chose to either continue with virtual learning or welcome students back to their buildings, several academic and independent researchers have found that policymakers are guided more by the voting preferences of their neighbors than coronavirus case numbers.

The latest evidence, released this month as a working paper through Brown University’s Annenberg Institute for School Reform, indicates that partisanship — as exhibited by the share of voters in a given county who supported Donald Trump in 2016, as well as the strength of local teachers’ unions — drove reopening plans “far more” than public health conditions.

That conclusion echoes the work of Jon Valant, a senior fellow at the Brookings Institution’s Brown Center on Education Policy, who shared his own findings in a much-discussed blog post this summer. Tracking the reopening plans of over 250 districts, Valant detected “no relationship” between each locality’s decision and its per-capita COVID cases. He said that education policy is just one consideration among many that have been “distorted” by the encroachment of national politics. 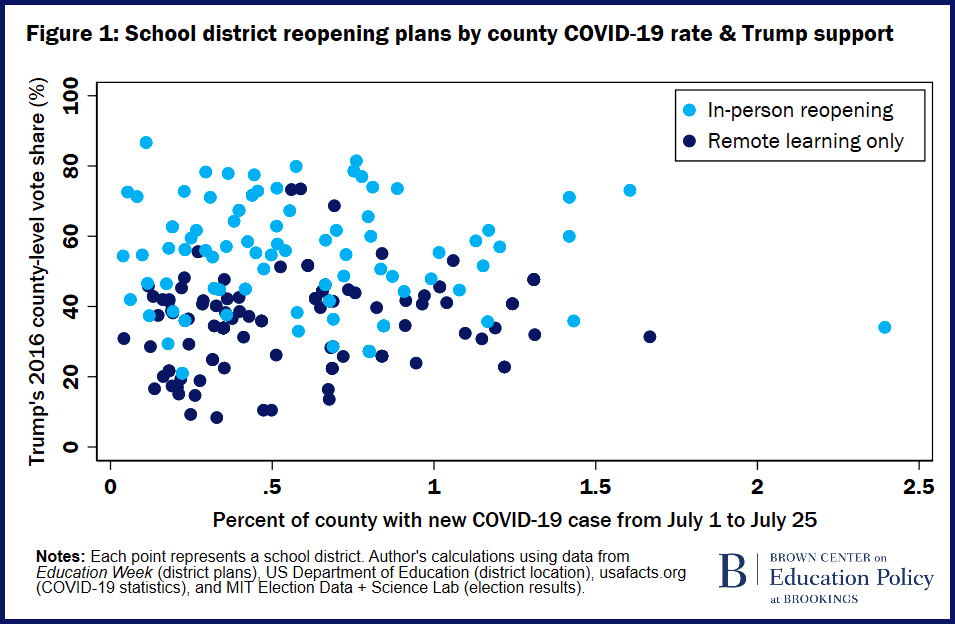 “There’s a long list of issues associated with COVID that should not be politicized, but have been politicized, and it feels as though school reopenings are on that list,” Valant said in an interview. “None of these analyses is totally bulletproof, but they’re strongly suggestive, if nothing else, that politics is a big part of the story.”

Michael Hartney, a political scientist at Boston College and one of the authors of the newer study, said it was difficult to identify a causal connection between districts’ COVID responses and a single political actor or event. Still, he added, it was somewhat natural for democratic entities like school boards to react to electoral pressures.

“There are a lot of MAGA-hat-wearing counties out there — super-strong pro-Trump counties — that have really high COVID case rates and probably should be closed, but they’re open,” Hartney said. “And on the other hand, you’ve got a lot of anti-Trump, pro-Clinton counties that have very, very low case rates, and their indicators suggest that they would be in the discussion for getting back to school. But a lot of them are closed.”

Hartney’s paper, co-authored with Leslie Finger of the University of North Texas, is the widest-ranging look so far at the factors influencing districts’ COVID responses. Using a colossal dataset of over 10,000 school district reopening plans (roughly 75 percent of all such plans from around the country) the study attempts to pinpoint the effects of politics and the pandemic in determining whether students were allowed to return to classrooms.

Disturbingly, the authors found that the link between a district’s relative intensity of coronavirus spread and its decision whether to reopen was “substantively trivial.” Tabulating the average daily case rate in each county during the two weeks prior to August 31 (by which time most districts would have had to advise the public of their strategy for the new school year), they found that a district with 20 new cases per 10,000 residents was just 1 percentage point more likely to open schools virtually than one with zero new cases. 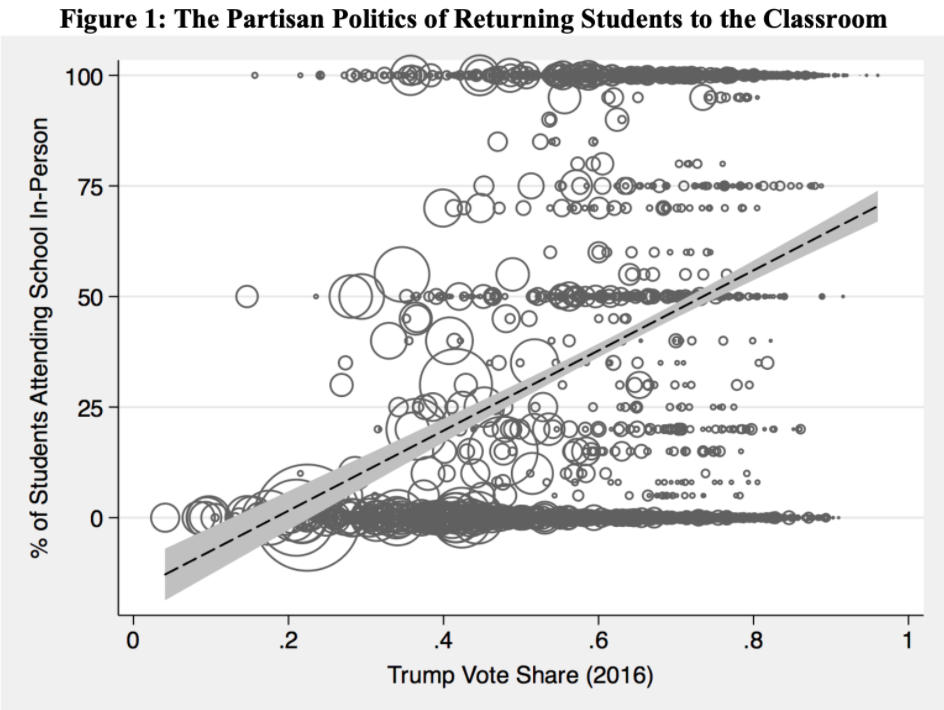 By contrast, local partisanship held much more sway, and specifically the 2016 vote share received in each area by Donald Trump. In a district in which Trump won 40 percent of the vote, there was a 27 percent likelihood that schools would keep their doors closed to begin the 2020-21 school year. But in a district where the president secured 60 percent of the vote, that chance was reduced to just 10 percent.

Hartney said that even under alternative measures of COVID exposure, such as cumulative deaths and cases, politics was still “the most powerful predictor by far” of reopening decisions.

“When you’re a quantitative researcher, you’re sometimes saying, ‘Eh, I don’t know how strong this result is,’ I will tell you, I have never been more confident in a correlation before than between the partisanship of a district and what they elect to do here.”

Hartney and Finger also highlighted a connection between reopening decisions and organized labor, according to two metrics: the size of a district (prior research has shown that higher student enrollments are correlated with greater union strength) and whether it permitted collective bargaining. Schools planned for a remote opening in 40 percent of districts where teachers could bargain collectively, the authors found, compared with just 15 percent of districts in which they could not.

Fair enough! My point is that district size is probably capturing all sorts of other stuff — e.g., complex transportation requirements/system — that may independently affect reopening logistics.

The findings seem to dovetail with the posture of local and national teachers’ unions, which have insistently called for caution in the return to in-person instruction. But the use of district size as a stand-in for union strength proved somewhat controversial in public discussion of the research, with some online commentators arguing that larger districts often face logistical and infrastructure challenges (such as aging facilities with poor ventilation, common in cities like Detroit, Baltimore, and New York) that could complicate a move back to in-person learning.

Other research supports the idea that union concentration is associated with a greater likelihood of online instruction. One recent study conducted by Corey DeAngelis, a prominent union critic and director of school choice at the libertarian Reason Foundation, found evidence that school reopening decisions were correlated with four different measures of union strength — but not with COVID risk. In states with right-to-work laws, the paper found, schools were 14 percentage points more likely to reopen in person relative to states without such laws.

Sarah Reckhow, a professor at Michigan State University and occasional coauthor of Finger’s, is working on her own state-level analysis of district decisions across Michigan. Writing in August with fellow political scientist Matt Grossman, she pointed to a strong tendency for Democratic-leaning school districts to plan for online reopenings in the fall. In an interview with The 74, she said that Hartney and Finger’s use of district size as a proxy for union power “made sense,” and that her own study looked at the respective strength of local collective bargaining agreements to get at the same correlation.

“We do find a relationship,” she told The 74. “Districts with more restrictive labor agreements are significantly more likely to go remote.”

Each of these assessments, several of which are still effectively blog posts, offer only preliminary evidence in a debate that will continue long after the current school year is over. But they underscore a phenomenon that academics have been pointing to for much of the last decade: the growing nationalization of local politics, once seen as a refuge from Washington, D.C.’s Olympian power struggles.

Increasingly, scholars say, governance at the state and municipal levels are riven with the same tribalism that has long characterized presidential and congressional races. A steady erosion of local media, combined with the tightening grip of partisan identity over everyday life, has come to shape the parameters of even low-turnout races for elected bodies like city councils and school boards.

According to Valant, partisanship is now “so wired into who we are” that Americans almost can’t resist “carrying that identity with us”; this is even true when considering questions such as plague mitigation, which ought to have no meaningful partisan weight. A wise reopening strategy, he argued, would account for the risks to children from isolating them at home as well as the dangers of allowing schools to develop into hotspots for disease.

“When an issue like this gets charged, it distorts the decision making in ways that are really dangerous,” he said. “People at the local level who are making those judgments still have political views, and they bring those attitudes and biases to the table when making decisions about what to do in their local communities.”

Democrats have generally been more wary of the dangers of the coronavirus and more likely than Republicans to favor strict mitigation measures like mask mandates. But there is also reason to think that the emergence of school reopenings as a campaign issue has magnified partisan differences. One poll found that in the six weeks between June 1 and July 15 — a period during which both the president and Education Secretary Betsy DeVos demanded that states abstain from online instruction in the fall — Democratic opposition to in-person reopenings rose from 46 percent to 70 percent.

One line of argument has cast an accusing finger at blue-state liberals, as well as teachers’ unions, for keeping at-risk kids locked out of school even when the dangers of sending them back are minimal. In particular, a ProPublica story pondered the question of whether educators and leaders of major urban districts had soured on the prospect of in-person reopenings as soon as Trump embraced them. While we won’t know for some time how schools acted as vectors for COVID, preliminary evidence suggests that cases have not ballooned in areas that have brought students back to classrooms.

Reckhow, who has observed Michigan’s halting progress in the direction of brick-and-mortar schooling as both an academic and the mother of school-age children, said that the question of politicized reasoning was “tricky to tease out. Some of the media coverage has really presented it as a causal story, and without really good longitudinal polling data, it’s hard to tell.” Still, she added: “You had school districts talking about in-person reopening plans in June that changed course in July. That happened.”

Hartney said that he intended his research only to serve as a vantage onto the political economy of school reopenings, not a means of upbraiding part-time school board members for adopting a particular course of action. But he expressed disquiet at the possibility that science took a backseat to politics when the lives of children were at stake.

“We all know we’re living in a highly politicized, polarized time. But one would think that if there was one set of public authorities that would address a public health pandemic in a less political way, it would be our nonpartisan local governments that are tasked with watching out for kids. If that threshold isn’t being driven by public health indicators, then good luck finding a political institution that is.”