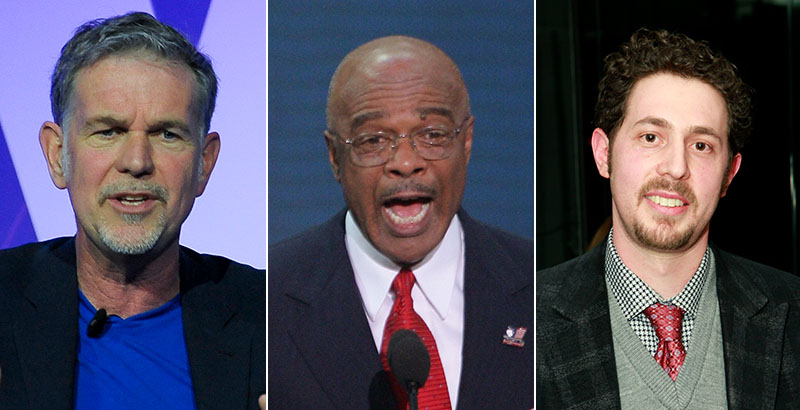 A billionaire entrepreneur, a former education secretary, and the head of a high-performing charter school network came to Capitol Hill together Wednesday to impress upon Congress the urgency of saving the Dreamers program.

“We are eager for a permanent solution, a humane solution to this issue that isn’t caught as leverage, political leverage,” said Dave Levin, executive director of KIPP, the national charter school network that organized the event. He and others, representing a broad cross section of political leanings, spoke to about three dozen congressional staffers and a few reporters.

The debate over continuing protections for recipients of the Deferred Action for Childhood Arrivals Program, often called Dreamers, has been tangled up in a larger mix of high-stakes issues that must be dealt with by lawmakers before the end of the year, including tax reform and continued funding for the federal government. Democrats and a few Republicans have said they won’t support a spending bill without a DACA fix.

Education advocates, even those who often don’t agree on other issues, have united since last year’s election and President Trump’s move to kill the Obama-era program that offered protections to some 800,000 young people who were brought to this country illegally as children and who are now working or attending school.

The advocates urged that the focus just be on that group and preserving the 2012 program rather than trying for a broader, and potentially more divisive, immigration measure.

“Generally in politics if we get something concrete done … then we might be able to do more over time,” said Hastings, a longtime charter school supporter who last year pledged $100 million to educational initiatives, including the Hispanic Foundation of Silicon Valley.

Protecting Dreamers from being deported from the only country many have ever known also has broad bipartisan support among the public, said Jorge Lima, executive director of the LIBRE Initiative, but the more issues get tacked onto a DACA bill, the more difficult it becomes to pass. Lima’s group does economic and school choice outreach in the Hispanic community and is supported by conservative billionaire Charles Koch.

The impending end to the program is already affecting DACA recipients, so a solution can’t wait, the advocates said.

The Trump administration in September announced an end to DACA, allowing a small window for undocumented young people whose permits expire before March 5 to reapply. An estimated 22,000 DACA recipients didn’t get their renewal permits in by the deadline, and thousands more will lose protections each day after the March 5 expiration.

John Smarrelli is president of Christian Brothers University in Memphis, which has enrolled and helped provide scholarships for about 100 undocumented students. They’re already facing pressure from their parents to quit school and go to work in order to save money ahead of possible deportation, he said.

“There’s an incredible urgency,” he said.

The March expiration would upend school staffing in the middle of state testing, he noted.

“You don’t just walk out on the street and get new teachers,” Paige said. “We can’t stand that kind of disruption. [A legislative fix] has to happen much, much earlier.”

Paige said he’s concerned that legislators — overwhelmed by scores of issues, each with its own staunch interest groups and down-to-the-wire imperative — will miss the human toll of failing to continue protections.

“We’ve got to find a way to communicate the urgency and the emotional impact that this issue carries,” he said. “It’s more than just legislation.”

Paige and four other former education secretaries, from administrations of both parties, united in September to call on Congress to “put politics aside and do what’s right” to continue protections.

Two DACA recipients and KIPP alumnae, Nancy and Adriana, whose last names were withheld, organizers said, to protect them from possible immigration reprisals, spoke about their experiences.

Nancy was born in Italy to parents from Ghana. At age 5 she came to the U.S., where her mother wanted her to have a better education. They overstayed their visas, and the enormity of her immigration status didn’t hit her until her mother told her she couldn’t participate in a study abroad program in high school, Nancy said.

“That was a devastating, crushing moment for me … realizing that everything that I worked hard for could be stopped just because I didn’t have a piece of paper to my name,” she said.

She went to a prestigious arts high school in Baltimore and got a full scholarship to Towson University, and now works in marketing for KIPP. If DACA protections aren’t continued, she could not only lose her career but also be separated from her mother, who now has a green card to stay in the country legally, she said.

Adriana’s family came to Austin, Texas, from Mexico when she was 4, seeking medical treatment for her ill brother.

She was aware of her immigration status, knowing she couldn’t legally work or drive, and was thrilled to receive a student enrollment number when she took classes at a local community college during high school. Texas provides in-state tuition and scholarships to undocumented students.

“The fact that I had a number that I could go to Austin Community College to learn Chinese was enough for me,” she said.

Adriana has since graduated from the University of Texas at Austin and works in marketing. Her DACA permit lasts for about a year, and she’ll work as hard as she can while she has legal status, she said, but fears she won’t be able to advance professionally if she isn’t offered a permanent immigration fix.