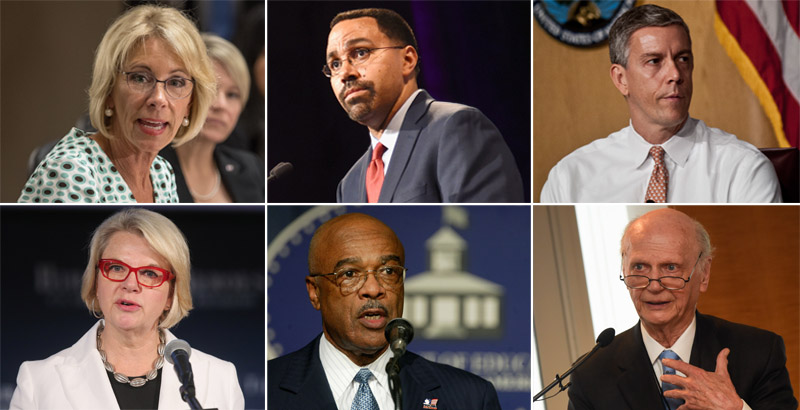 Days after the Trump administration announced it would end the Deferred Action for Childhood Arrivals program — a move that has thrown the lives of thousands of students and teachers into chaos — Education Secretary Betsy DeVos has broken her silence. “My heart is with” the roughly 800,000 DACA recipients, also known as Dreamers, she said in an interview with CBS News posted Friday. The statement puts DeVos in sync with five former education secretaries, who sent a letter Wednesday to Congress urging action.

“I understand they’re here not by their own volition, and yet they are serious about pursuing their education and contributing to our American society and culture,” DeVos said. “We are a nation of compassion, and we are also a nation of laws.” She urged Congress “to do what it needs to do.”

Unlike some conservatives who have applauded President Trump’s move to kill DACA, arguing that then-President Barack Obama overstepped his authority when he authorized it in 2012, education leaders across the political spectrum have been uniquely united in their defense of Dreamers, nearly half of whom are in school.

“Terminating DACA administratively without a legislative solution would cause hundreds of thousands of young immigrants to lose their jobs, their legal status and their protection from deportation,” the secretaries said in the letter. “It would trigger a chaotic reversal of the gains achieved by these Dreamers over the last five years, undermine faith in our country’s immigration system, and make it harder to enforce our laws. It would create a gaping hole in our economy, disrupt our communities, and make it infinitely harder to strengthen our immigration system and protect our country. We owe ourselves and our country’s Dreamers a better way forward.”

Thanks to 4 former Ed Secretaries- 2 Ds & 2 Rs- for standing w me to #DefendDACA.
Values, and people, before party. https://t.co/zil2MSc4Vi

Attorney General Jeff Sessions announced Tuesday that the Trump administration would rescind DACA, with a six-month delay, because the “open-ended circumvention of immigration laws was an unconstitutional exercise of authority by the Executive Branch.” Obama approved the program in 2012 by executive order after Congress “specifically refused to authorize” similar protections, Sessions said.

“You have nothing to worry about” for six months, Trump tweeted Thursday to ease fears among DACA recipients, reportedly at the request of House Minority Leader Nancy Pelosi, Democrat of California. Following a phone call with Trump, Pelosi said the president is open to signing the long-delayed Dream Act, which would create a path to legal status for certain undocumented immigrants who were brought to the country as children.

.@NancyPelosi: “This is what I asked the president to do and boom, boom, boom, the tweet appeared.” pic.twitter.com/eWMw2hIaV6— CSPAN (@cspan) September 7, 2017

Led by New York Attorney General Eric Schneiderman, attorneys general from 15 states and the District of Columbia announced a lawsuit Wednesday against the Trump administration over its DACA repeal, alleging it would “cause harm to hundreds of thousands of the states’ residents, injure state-run colleges and universities, upset the states’ workplaces, damage the states’ economies, hurt state-based companies, and disrupt the states’ statutory and regulatory interests.”

On Thursday, 185 civil and human rights groups sent a letter to Congress that reflected the one sent by the former education secretaries, urging lawmakers “to immediately pass the Dream Act without amendment.” Several education-focused groups were included in the letter, including the American Federation of Teachers; the Gay, Lesbian, and Straight Education Network; the Mexican American Legal Defense and Educational Fund; and the NAACP Legal Defense and Educational Fund.

And on Friday, U.S. Commission on Civil Rights Chairwoman Catherine Lhamon, assistant secretary for civil rights in Obama’s Education Department, said in a statement that “rending America’s social fabric to target children solely on the basis of their parents’ decision offends the American values embodied in the Dreamers and their principled contributions to our nation.”