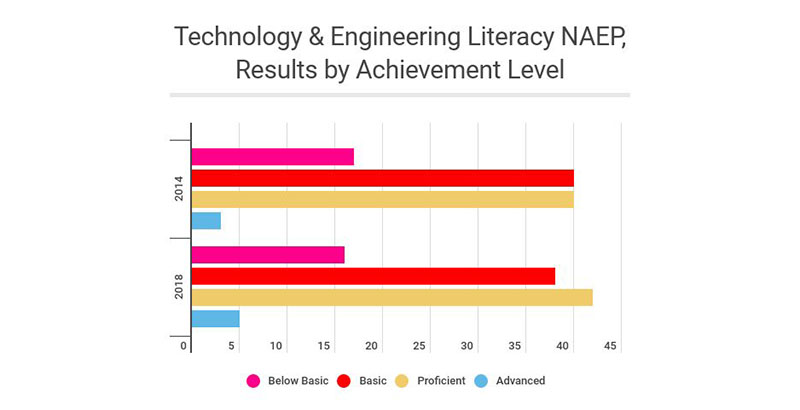 American middle schoolers are performing better on a national assessment of technology and engineering, an improvement driven largely by girls.

Overall, students’ average score on the National Assessment of Educational Progress in Technology and Engineering Literacy increased two points from 2014, the first time the test was given. Several subgroups showed statistically significant improvements, including white students, black students, students eligible for free and reduced-priced lunch, and students whose parents did not graduate from high school.

“The girls have done extremely well on this assessment,” Peggy Carr, assistant commissioner for assessment at the National Center for Education Statistics, said on a call with reporters Friday.

A change of two or three points means the difference is “not random” and statistically significant, Carr said, “so girls improving to the point that they’re now five points ahead of boys is a meaningful statement.”

The results come in the midst of an increasing focus across the country to get more girls, particularly girls of color, into science, technology, engineering and math careers.

The gender gap was present in the 2014 results as well, though it was smaller four years ago.

The test also asked students whether they had taken any classes related to technology or engineering. More students overall are taking these type of classes — 57 percent, versus 52 percent in 2014 — and students who took the classes did better on the tests overall. Girls, however, still lagged behind the boys in taking those classes.

Though overall scores increased, and more students are reaching “proficient” benchmarks set by test givers, fewer than half of students, 46 percent, reached that bar. And achievement gaps between white and Hispanic students, and between white and black students, remained.

The assessment was given in 2018 as part of the NAEP, the test often referred to as the Nation’s Report Card and better known for its biannual release of reading and math scores for fourth- and eighth-graders. It was given on laptops to about 15,000 eighth-graders in 600 public and private schools.

Rather than a baseline measure of knowledge, the test assessed how students used their knowledge of technology and engineering to interact with the world, Carr emphasized.

Sample questions, for instance, required students to look at a chart comparing traditional and energy-saving lightbulbs and highlight the information that might persuade someone to buy the more energy-efficient version. Another asked students to explain how the simplified packaging companies can use when selling products online would benefit the environment.