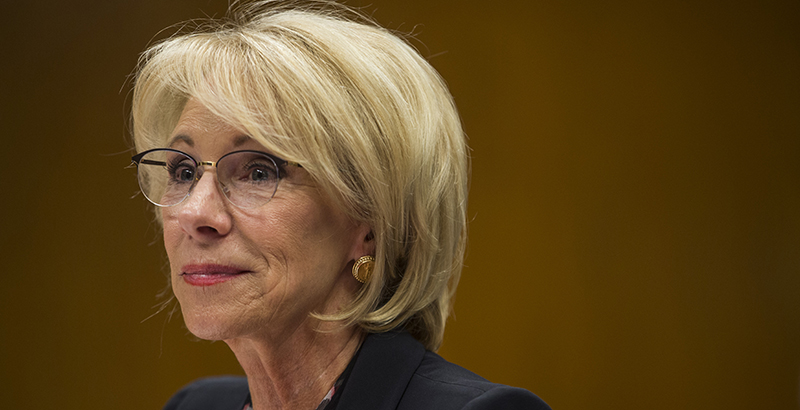 Former Secretary of Education Betsy DeVos touted the Trump administration’s controversial Title IX rule that increased protections for students accused of sexual harassment as one of her most significant accomplishments. In a farewell letter to Congress, she urged legislators to uphold the rule.

While the Biden administration is not inclined to do that, unraveling DeVos’s Title IX legacy may prove challenging. Not only are her changes codified in a formal rule that could take up to two years to replace, but universities have also spent the past year changing their Title IX infrastructure to match the new requirements.

In replacing the Trump rule, the Biden Education Department should restore successful elements of the Obama administration’s approach to Title IX while addressing some legitimate problems identified by DeVos’s team. The new guidance should do more to encourage students to report instances of sexual harassment, both to protect accusers from retaliation and so that schools can have accurate data.

To do this, President Joe Biden should broaden DeVos’s definition of sexual harassment and increase the number of reporting pathways. DeVos was right to include dating violence, domestic violence and stalking in her prohibitions against harassment; any interim guidance on the issue from the Biden administration should include these prohibitions, as civil rights organizations have proposed.

But DeVos’s definition of sexual harassment includes only conduct “so severe, pervasive and objectively offensive that it denies a person equal educational access.” The Obama-era definition of “unwelcome conduct of a sexual nature” goes further and should be restored.

Under the DeVos rule, Title IX resources and procedures kick in only when a school has been formally notified through its Title IX coordinator. By contrast, earlier guidance allowed for informal notification from members of the local community, social networking sites or the media. Reestablishing these less formal reporting pathways would enable schools and colleges to support students by enacting housing changes, no-contact orders and other protective measures and would trigger their response obligation.

Biden should also move quickly to reaffirm Title IX’s responsibility to protect LGBTQ students. Last June, the U.S. Supreme Court issued a ruling that redefined “sex” to include LGBTQ people under Title VII of the Civil Rights Act of 1964. Despite this, and on DeVos’s last day in office, the U.S. Department of Education issued guidance saying Title IX protections do not extend to LGBTQ students.

On Biden’s first day in office, the new president issued an “Executive Order on Preventing and Combatting Discrimination on the Basis of Gender Identity or Sexual Orientation,” which, among other things, reaffirms that the Supreme Court ruling applies to Title IX. While this seemingly invalidates DeVos’s earlier guidance, Biden should formally revoke it and issue new, more detailed guidance built on the Supreme Court ruling.

Due process is where the debate gets murky, complicated by the fact that while Title IX is overseen by the Office for Civil Rights, it governs some conduct, sexual assault, that is subject to criminal law.

Biden’s next step should be restoring protections for accusers by requiring that schools use the lower “preponderance of the evidence” standard instead of the “clear and convincing evidence” standard that DeVos forced many schools to use.

And he should halt cross-examinations for both the accused and accuser.

Obama-era guidance was criticized by men’s rights groups and those defending students’ constitutional rights for not providing enough protections for accused students, for allowing a lower standard of evidence than in a typical criminal court and for discouraging live cross examination of the accuser.

But DeVos’s rule went too far in the other direction, providing so many protections for the accused that it infringes on protections for the accuser. Although her new rule allows schools and colleges to choose a standard of evidence, it requires them to apply whatever rule they select to all campus proceedings, including for staff and faculty. As a result, many institutions are forced to use DeVos’s stricter evidentiary standard because their collective bargaining agreements, tenure rules and academic freedom codes require the stricter standard, notes Title IX scholar R. Shep Melnick.

DeVos argued that cross-examinations are crucial for understanding the credibility of an allegation. But even with state rape shield laws protecting their sexual history from questioning, the process can still re-traumatize accusers by making them relive the experience. And although neither party can conduct the cross-examination itself, the process may give an unfair advantage to students able to hire a good lawyer, which may further discourage reporting.

Because Title IX investigations decide only whether a student violated the university’s code of conduct and not the law, and because high standards shouldn’t discourage students from reporting, Biden should return to using the standard of evidence used in civil proceedings.

This won’t necessarily be simple. Sage Carson, manager of the advocacy organization KnowYourIX, anticipates men’s rights activists and others who found comfort in the DeVos administration will bring a wave of lawsuits against such changes.

New Biden guidance would also present administrative challenges for schools and colleges and the Education Department. Colleges and universities scrambled to update their Title IX policies to ensure compliance before DeVos’s new rule went into effect in August. New interim guidance and an eventual new rule will require another round of recalibration. The Obama administration’s Title IX guidance was voluminous, and DeVos’s 2,000-plus-page rule wasn’t much of an improvement.

But civil rights aren’t protected on the back of an envelope. Although demanding, a survivor-centered rule is the right public policy.

Brooke LePage is a policy associate at FutureEd. She previously worked at the U.S. Education Department and the Massachusetts Council of Human Service Providers.