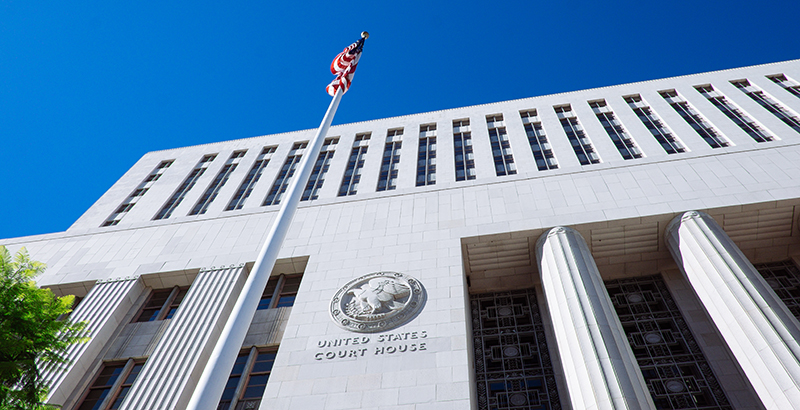 The policy, scheduled to take effect Aug. 14, newly limits the cases in which K-12 schools and colleges are required to investigate allegations of sexual harassment on campus. It strengthens due-process protections for accused students and says that institutions must intervene only in cases sufficiently “severe, pervasive and objectively offensive” to obstruct access to education. It additionally clarifies, for the first time, that stalking and dating violence are covered by Title IX protections.

Lead plaintiffs Josh Shapiro of Pennsylvania, Xavier Becerra of California and Gurbir Grewal of New Jersey, as well as the other attorneys general, filed the lawsuit in federal court, naming not only the education secretary but also the Department of Education and the United States of America as defendants. In court documents, they ask the court to put the Aug. 14 effective date on hold pending judicial review, and to “vacate and set aside” DeVos’s rule.

If the rule goes into effect, they say, students will have reduced protections against predatory behavior when they return to classrooms in the fall or at some later point, depending on COVID-19, ultimately undoing “decades of effort to end the corrosive effects of sexual harassment on equal access to education.” They add that the ruling’s timing is unreasonable because it leaves schools and colleges just three months to revamp their sexual misconduct review systems, with diminished resources during a global pandemic.

“If any student experiences sexual harassment, or if any student is accused of committing sexual harassment, they deserve a fair process,” Jacklin Rhoads, a spokesperson at Josh Shapiro’s office, told the 74. “But Secretary DeVos has chosen to issue regulations that narrow Title IX’s protections. She has also chosen to impose a prescriptive process on all schools that is both inequitable and unfair — especially for primary and secondary schools.”

U.S. Department of Education press secretary Angela Morabito derided the complaint in an emailed statement, calling it “a political press release masquerading as a lawsuit.”

“The new Title IX rules protect all students by requiring schools to follow a reliable, transparent, and fair process in handling complaints of sexual misconduct,” she wrote.

But the attorneys general and other leaders from around the country worry that the new regulations, and their rushed timing, will muddy the waters for schools and colleges, further deterring survivors from reporting sexual assault. According to a 2016 U.S. Department of Justice analysis, almost 80 percent of all rapes and sexual assaults go unreported.

Joel Levin, a co-founder of Stop Sexual Assault in Schools, is concerned about the changes burdening K-12 schools in particular, given that they’ve historically struggled to adjudicate allegations due to a relative lack of resources and institutional knowledge.

“It creates a nightmare for K-12 schools,” he says, adding that since the rule was passed in May, he’s been in touch with families and Title IX coordinators at schools around the country. “By changing the definition of sexual harassment, you contradict local policies and state laws — that creates a big headache for implementation.”

Thursday’s lawsuit is the latest addition to a growing chorus of protest condemning the new policy. One week after the regulations were finalized last month, the ACLU sued DeVos, the Department of Education and Kenneth Marcus, the department’s assistant secretary for civil rights. Four nonprofits were named as plaintiffs: Advocates for Youth, the Council of Parent Attorneys and Advocates, Girls for Gender Equity, and Stop Sexual Assault in Schools. In late May, Rep. Jackie Speier, a Democrat from California, sent a letter with more than 100 House members’ signatures to DeVos, urging her to rescind the rule. The chair of the U.S. Commission on Civil Rights, Catherine Lhamon, wrote in a tweet that DeVos is “taking us back to the bad old days … when it was permissible to rape and sexually harass students with impunity.”

Although the policy was only just finalized last month, it’s the culmination of efforts DeVos has taken in overhauling Title IX protections since she assumed office in 2017. The draft regulations were introduced in 2018 and posted for public comment, drawing 124,000 remarks from schools as well as survivors and proponents of due process.

The new regulations require that colleges hold live hearings, wherein students accused of misconduct can submit, cross-examine and challenge evidence. Such hearings aren’t mandated at the K-12 level. Schools are allowed to choose which standard of proof to apply to allegations: the “preponderance of evidence” standard used during the Obama administration, or the higher “clear and convincing” standard.

Are the Title IX Regulations Proposed by DeVos a Step in the Right Direction? Experts Debate Consequences at AEI Event

Title IX was enacted in 1972 to ensure that students have access to education without being discriminated against on the basis of sex. It was a critical but broadly defined mandate, and it wasn’t until several decades later, in the 1990s, that the Education Department started to clarify the law’s implications for on-campus sexual harassment through a series of directives that would continue to be published during the Obama administration. The “Dear Colleague” letters, so called because of the way they addressed K-12 school and college leaders, spelled out that on-campus sexual harassment is a form of sex-based discrimination under federal law, and that it is prosecutable under Title IX.

Because recent data on sexual assault among school-age children aren’t available from the federal government — the most current information shows that, as of 2015-16, elementary and secondary school students reported about 9,700 incidents of sexual assault, rape or attempted rape — it’s hard to know if those numbers have increased or decreased during DeVos’s tenure. According to a tally conducted by NBC News last month, at least 330 lawsuits have been filed nationwide since the start of 2018, alleging that K-12 schools either failed to protect students from sexual misconduct or bungled relevant investigations.

Advocates fear that the new policy will confuse matters further by creating a discrepancy between state and federal definitions of “sexual harassment” — according to DeVos’s rule, the updated federal definition will override any determined at the state level. They explain that the changes mean allegations of harassment under Title IX will be regarded with more skepticism than those alleging discrimination based upon race or disability. And they worry that the new policy will force institutions to have two parallel, separate systems for managing sexual assault claims: one for those covered by the new regulations and another for claims that don’t meet that definition.

Levin says the policy creates an administrative problem because it leaves open the question of who decides which cases fall under Title IX, as well as what procedures exist for the cases that don’t meet that threshold. “How do they determine whether the threshold is met?” he asks. “How do they decide the difference between what constitutes ‘severe’ for a second-grader, as opposed to a high school student? Someone will have to make that determination.”

Like other advocates, he’s concerned that the changes could have a chilling effect on students reporting incidents of harassment. “It’s disturbing,” he says. “By creating these barriers, the administration is making it more difficult for students who are reporting sexual harassment, and those that have been named as harassers. That’s against the spirit of Title IX.”

Levin also points to something that hasn’t been mentioned in the suits — that perhaps the part of the new rule allowing K-12 schools to hold hearings to adjudicate Title IX cases if they so choose might also deter students from reporting. “I think that’s another inhibitor here,” he says.

The Department of Education has 60 days to file a reply to the complaint; as of yet, it’s unclear whether the court will delay the rule’s scheduled effective date, and whether or not it will issue a preliminary injunction against one or more provisions in the new regulations. In the meantime, Levin says he expects to continue fielding questions from confused families.

“Title IX is complicated to understand,” he says. “Now these new regulations throw us for a loop.”