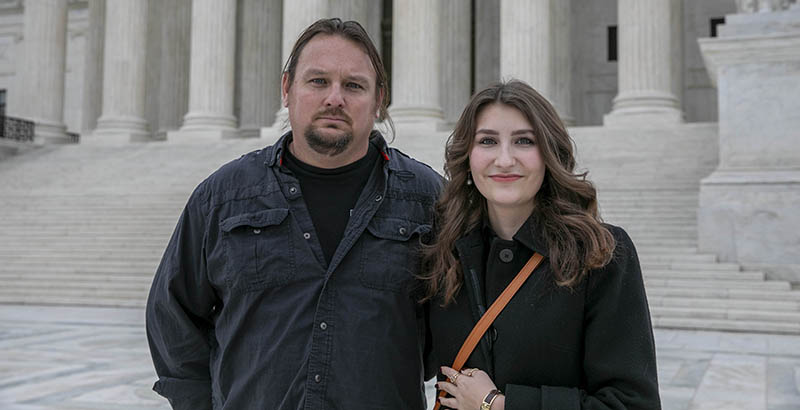 David and Olivia Carson outside the U.S. Supreme Court Wednesday. (Institute for Justice)

Maine allows private religious schools to participate in its tuition benefit program for families that don’t have a public high school in their communities — except those that seek to instill religious beliefs in their students.

That caveat is at the heart of Carson v. Makin, argued before the U.S. Supreme Court Wednesday, a case that is likely to determine whether states can continue to ban religious schools from publicly-funded choice programs. Based on the justices’ questioning, experts said Maine, and states with similar laws, would likely no longer be able to defend them.

“This absolutely discriminates against parents,” Michael Bindas, a senior attorney with the libertarian Institute for Justice, who represents the plaintiffs, told the court. The state is discriminating against religion, he added, because decisions about whether a school is too religious to participate is “based on the decision of a bureaucrat in Augusta.”

Christopher C. Taub, Maine’s chief deputy attorney general, countered that the state’s program is “religiously neutral” and only seeks to give families free public education “roughly equivalent” to what they would get in a district school.

Wednesday’s hearing was the second time in two years the Supreme Court has considered whether public funds can pay for students to attend religious schools as part of school choice programs — an issue that public school advocates argue is a clear violation of the First Amendment’s separation of church and state. In 2020, the court ruled in Espinoza v. Montana Department of Revenue, that the state could not exclude a religious school from a tax credit scholarship program simply because it was religious. The question in Carson takes the issue a step further, asking the court if officials can still ban such schools if they spend state money to teach religion. The fine legal parsing revolves around the issue of “status vs. use” — in this case, the difference between an institution that has a religious affiliation and one that uses public money to promote religion.

“What’s worrying me is that if the state must give money to the schools, they are going to get into all kinds of religious disputes,” said Justice Stephen Breyer, one of the three iberal members of the court. “People will think the government favors some things as opposed to others, and that will cause strife.”

Bindas responded that the benefit “severs the link” between government spending and religious schools because it goes directly to parents, who ultimately make the choice. He said in a webinar following the hearing, that those who receive Pell Grants or go to college on the G.I. bill can already use funds at religious institutions.

Justice Brett Kavanaugh, among the six conservative majority members of the court, said the plaintiffs in the case — two families that were denied the benefit — are “seeking equal treatment, not special treatment.”

Justice Samuel Alito noted, as Bindas did, that until 1980, the state allowed schools that teach religion to participate. “Are you aware of a history of strife?” he asked.

Alex Luchenitser, an associate vice president at Americans United for Separation of Church and State, described Wednesday’s hearing as “troubling.”

“Very few of the justices paid any attention to the longstanding principle at the heart of American constitutional tradition —.that taxpayers should not be forced to fund religious education,” he said.

Because both schools attended by students in the case are opposed to hiring gay teachers, and one does not admit transgender students, a decision in favor of the plaintiffs could mean tax dollars would fund schools that discriminate based on sexual orientation or gender identity.

Carson focuses on a Maine law in which towns without a high school cover the cost of tuition for students to attend private schools or public schools in other districts.

Arguing for the Biden administration, Malcolm Stewart, U.S. deputy solicitor general, said the state is being fair because the program wasn’t “intended to provide the broadest range of possible choices. It’s intended to provide a substitute for public education.”

But at the webinar, Bindas said he was “confident the justices are going to agree with us,” in part because the benefit can be used at elite, expensive private schools that are far from equivalent to what a public school can provide. The state has even allowed families to use the benefit at boarding schools in states as far as California.

Joshua Dunn, a political science professor at the University of Colorado-Colorado Springs, said it could be “difficult for Maine” to win this case because the state is “picking and choosing among religious schools.”

That aspect of the state’s program both hurts and helps its case, added Derek Black, a constitutional law professor at the University of South Carolina. The court could find that the state is not discriminating against religion because it does allow some sectarian schools to participate.

But he added, “I don’t see five people trying to rule in Maine’s favor right now.”

The tuitioning programs are unique to New England, but a decision in favor of the plaintiffs would strike another blow to state laws — known as “Blaine Amendments” — that restrict government funding of religious schools.

In Michigan, for example, five families are suing the state for not allowing them to spend funds in their 529 college savings accounts on tuition at private schools. The 2017 federal tax cut law included a provision that allows families to use these accounts for K-12 expenses. But Michigan still prohibits their use at private schools, which, officials argue, means they’re not discriminating against religious schools.

While the argument in Carson doesn’t apply in the Michigan case, “the only thing keeping Blaine Amendments alive is this status-use distinction,” Dunn said. “Getting rid of it likely would remove the last bit of life support that they’re on.”

Dunn suggested the justices could rule that, as in Espinoza, this is really a case of discrimination based on religious status, overruling the 1st Circuit Court of Appeals, which argued it was a case about religious use of public funds.

Black said considering how little the justices’ questions focused on using public funds to teach religion, that could be the way they’re leaning.

But deciding this case on the grounds of Espinoza “just delays the issue” because there are already similar cases asking the same question, Dunn said. “I don’t think they can dodge it.”

There’s also a slim chance that the court could decide the plaintiffs didn’t have “standing” — the right to make the legal argument — because the religious schools the plaintiffs chose to attend have said they wouldn’t accept public funds anyway. Both Justices Clarence Thomas and Amy Coney Barrett raised that issue.

But that’s unlikely to be the result, Black said  “They didn’t take this case to issue a ruling based on standing.”