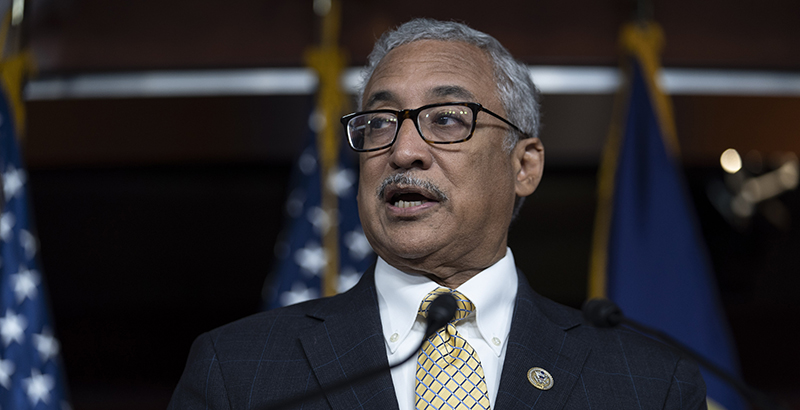 A blue wave of support for Democrats is coming, many election handicappers say, one that could have a big impact on federal education policy.

If party control of the U.S. House changes, and Democrats take the reins on the Education and the Workforce Committee, the panel could switch from one that has largely adopted a hands-off approach to federal education policy, particularly K-12, to one with an intense focus on civil rights, equity, and oversight of the Education Department and its controversial secretary, Betsy DeVos.

Predictions on how many seats Democrats will pick up — and if they will be enough to retake the majority — seems to shift daily, as the whiplash news cycle changes public perceptions of President Donald Trump and congressional Republicans. And that’s even before accounting for the dynamics of individual races and the House candidates themselves.

As of July 24, Real Clear Politics predicted the Democrats would win 199 seats, including those they judge as “likely” and “lean” Democratic, while Republicans would win 202 seats. Another 34 are rated as toss-ups, 32 of which are currently held by Republicans.

Either party needs 218 seats to hold the majority; Republicans currently have 236 seats.

Rep. Bobby Scott of Virginia, currently the committee’s ranking Democrat, is likely to assume the chairmanship if Democrats retake the House.

“The Democratic education agenda will continue to focus on closing persistent gaps in educational equity and achievement, increasing college enrollment and completion, and expanding access to quality workforce training, including career and technical education and apprenticeships,” Scott told The 74 through a spokesperson. “We also must hold the Trump administration accountable for attacking students’ civil rights and prioritizing corporate profits over the best interests of young people across the country.”

All committee leaders have to take cues from party leadership, and Scott similarly won’t be a “free agent” in determining the focus for his, said Rick Hess, director of education policy studies at the conservative American Enterprise Institute.

One of the first proposals Scott could take up would be one already released by party leaders earlier this year to dramatically increase education funding by rolling back some of the recently passed federal tax cuts.

Senate Minority Leader Chuck Schumer and House Minority Leader Nancy Pelosi in May released a proposal to put $100 billion more into schools, half to raise teacher pay and half for school infrastructure. They also promised more money in Title I grants for low-income schools, a boost in federal spending on special education, and a federal law to give teachers the same bargaining rights as private-sector employees where they don’t currently have them.

Though some handicappers put Democrats’ chance of retaking the House at better than 50 percent, there’s a much smaller prospect that they’ll get control of the Senate, and almost none that they can get a filibuster-proof 60-vote majority there.

That, plus Democrats’ distaste for cutting deals with the Trump administration, means that almost nothing they propose will actually become law, Hess said.

“The fact that they’re not going to try to pass anything will be freeing. It’s not like they’ll have to worry about stepping on their own toes legislatively. They can just kind of throw ideas out there that they think are going to be popular,” Hess said.

Shortly after the midterms, discussion of the 2020 presidential campaign will begin in earnest, distracting from any other federal education stories, he predicted.

Under the current committee chair, Rep. Virginia Foxx of North Carolina, its most notable legislative achievements were this week’s bipartisan reauthorization of the career and technical education law and a sharply conservative Higher Education Act reauthorization. While there was broad support on the CTE bill, which passed both chambers without dissent, Foxx’s higher education reauthorization is much more divisive, and it hasn’t yet been brought for a vote on the House floor.

As House Prepares to Approve Federal CTE Law, Some Worry That Senate Provision Could Incentivize States to Lower Their Goals for Students

Charlie Barone, policy director at Democrats for Education Reform, predicted that beyond crafting their own higher education rewrite and the union rights bills, Democrats would work on “unity issues” like reducing college costs and universal preschool.

Passing a proposal like the increased teacher pay bill is almost certainly a few years off, and would require Democrats to control the House, the Senate, and the presidency, Barone said.

From the Schoolhouse to the Statehouse: These 7 Teachers Are Running for Office to Say ‘No More’ to Slashed Education Funding

Barone was more optimistic that a bipartisan issue, like rewriting the higher education law, or a juvenile justice bill, long a priority for Scott, could actually become law.

House leaders this week announced their “Aim Higher Act” that would, for instance, crack down on for-profit colleges, open federal financial aid to Dreamers, and increase federal aid to low-income students, all with the goal of eliminating student debt.

Regardless of any legislative movement, the biggest and most immediate changes, education advocates and observers said, would be an uptick in the number and tenor of oversight hearings for the Education Department.

“Far and away the biggest change would be that the Democrats would presumably start to hold a lot of oversight hearings. They can make life frustrating for the department, because they can demand a lot of paper, they can hold a lot of hearings and demand that officials come over,” Hess said.

DeVos made her first hearing before the House committee in May; she has yet to come before the Senate education committee since her contentious confirmation, despite calls by Democrats. Other officials, who were slow to be nominated and confirmed, could be called to testify on other topics.

There is a “whole slew of things” the committee could look into, Barone said.

The list is a highlight reel of the major policy changes the Trump administration has made so far, including altering Title IX standards for sexual assault investigations, eliminating affirmative action and school integration guidelines, relaxing rules for implementing the Every Student Succeeds Act, and loosening oversight of the for-profit college industry, he said.

The proportion of Democrats and Republicans on each committee generally tracks with how much of the House overall each party controls. In the current Congress, for instance, Democrats hold 17 of the 40 seats on the education committee, or about 43 percent, and 193 of the 435 House seats, or about 44 percent. So if Democrats gain seats in the Congress overall without retaking the majority, they could still pick up seats on Ed Workforce.

And whichever party controls the chamber, there will be some new faces on the panel next year.

At least six committee members are departing the House for sure.

Among Republicans, Reps. Todd Rokita and Luke Messer lost their bids for the U.S. Senate seat in Indiana. Rep. Lou Barletta is challenging Pennsylvania Sen. Bob Casey, himself a member of the upper chamber’s education committee. Rep. Tom Garrett of Virginia is departing after allegations of staff mistreatment; he has also said he is an alcoholic.

Another handful of committee members, all Republicans, are in races rated as competitive by Cook Political Report as of July 24.

Rep. Karen Handel of Georgia’s race is rated as “lean Republican.” Reps. Tim Walberg of Minnesota and Glenn Grothman of Wisconsin are “likely GOP.” Rep. David Brat of Virginia and Jason Lewis of Minnesota, meanwhile, are in toss-up races.

In the Senate, Real Clear Politics predicts Democrats will take 45 seats and Republicans 48, with seven rated as toss-ups. No HELP Committee member up for re-election this year is in a highly competitive seat.