I have some bad news: The effects of the COVID-19 pandemic are likely to linger for decades.

One mechanism is through education. As my series on educational disruptions has shown, children who miss school time suffer academic losses in the short run, and those effects are noticeable decades later in the form of worse economic outcomes and other quality-of-life metrics. In the case of a series of teacher strikes in Argentina, researchers even found that the harmful effects passed down from one generation to the next.

But babies born during the pandemic may also suffer. At least, that’s what happened in the wake of the 1918 flu pandemic, according to a widely cited 2006 paper by Columbia University’s Douglas Almond. Almond looked at the cohort of babies born in the wake of the flu outbreak that hit most severely in late 1918 and early 1919, then followed their life trajectories through 1980. Compared with children born just before or after, children exposed to the flu pandemic were less likely to finish high school, earned less money and were more likely to depend on welfare assistance. The harmful effects were twice as large for nonwhite children.

The graph below, from Almond’s paper, shows this clearly. During a period when educational attainment levels were rising markedly, children born in 1919 represent a clear outlier. 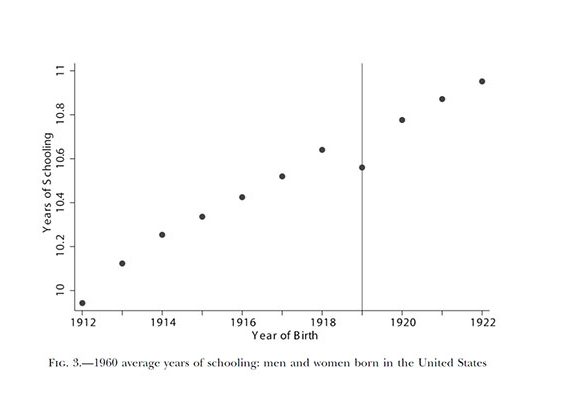 In addition to suffering educational and economic outcomes, children born in the wake of the 1918 pandemic were more likely to have served time in jail or to report a work-limiting disability 60 years later. By 1980, adults born in 1919 had received 8 percent to 12 percent more in welfare payments than their peers who were born a year earlier or later.

To be clear, Almond did not have data on a direct link between the influenza virus and its effect on children. The data necessary to make that point simply weren’t collected back then. It’s quite possible that Almond was actually observing economic effects, not anything tied to a mother’s health or viral strains that she may or may not have passed on to her children.

Thankfully, babies and young children have been spared the worst health effects from COVID-19. About 2 percent of infants born to mothers who test positive near the delivery date have also tested positive within the first four days after birth. Recent studies from New York City and San Francisco have found that babies born to mothers infected with the virus were no more likely to suffer adverse outcomes in terms of birth weight, difficulty breathing or respiratory infections than babies whose mothers were not exposed.

But those studies may be incomplete. While Almond’s research does not show evidence of a direct health link, the indirect economic effects he found are still worrying. For example, a Dutch study found that children born during recessions live fewer years than individuals born during economic booms. Similarly, a study on recessions in the U.S. found that young children and babies who live in the counties hit hardest by a recession face lower odds of graduating from college, earn less money and are more likely to live in poverty as adults.

The 1918 pandemic itself led to a sharp, albeit brief, economic shock that slowed manufacturing and industrial output. Partly because the country was in the midst of fighting World War I during the worst months of the pandemic, the economy rebounded quickly. In contrast, economists aren’t expecting a full economic recovery from the COVID-19 pandemic for at least a few more years.

We may need to wait a few years to see whether the economic effects of COVID-19 start to materialize. For example, a study that came out last year found that babies born in California during the depths of the 2007-09 recession had lower birth weights and a higher likelihood of pre-term birth compared with babies born before or after the recession. Again, socially and economically disadvantaged groups suffered the largest effects.

These are ominous findings suggesting that hidden economic factors may influence a child’s life in ways that aren’t obvious in the moment. But hopefully, they give policymakers more reasons to speed economic recovery efforts and make sure they deliver benefits to families and children who are going to need them the most.