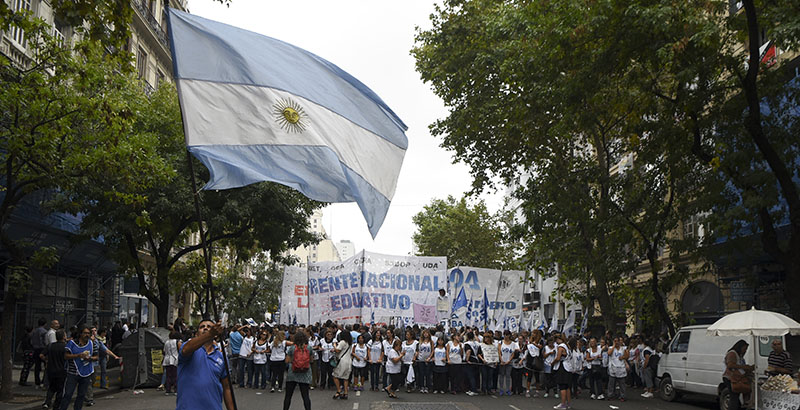 Today, I’m going to focus on a wave of teacher strikes in Argentina that began in the early 1980s. Like the earthquake, the strikes caused students to miss large chunks of educational time, which had lasting consequences.

Beginning in 1983, Argentina faced a wave of teacher strikes, some regional and others national. In a paper looking at the long-term effects, researchers David Jaume and Alexander Willén found that the strikes caused the average student to miss out on 88 days of instruction over the course of primary school, or about 7 percent of elementary school class time. Because the strikes varied by province in terms of frequency and length, Jaume and Willén were able to look at the educational and longer-term life outcomes of the affected students.

In the short run, students who lost educational time had lower high school and college completion rates and completed fewer years of schooling. These effects were concentrated among students in the bottom 75 percent of family income, with the poorest students suffering the largest declines. Students from the richest 25 percent of families suffered no adverse consequences at all.

The negative effects also lingered into adulthood. Adults who lost more educational time as children had higher unemployment rates and earned lower wages. For an average elementary school student who lost 88 days of instructional time, that amounted to a 3 percent loss in future earnings as an adult.

Both men and women suffered from the strikes, but the lost educational time affected them differently. As adults, boys who were affected by the strikes worked the same number of hours as their peers, but in lower-paying jobs and industries.

Women suffered in different ways. For one, they were more likely to shift out of the workforce entirely. The strikes also seemed to cause a downward effect in the marriage market. Girls who missed more school time due to the strikes tended to marry less-well-educated spouses who, in turn, earned less money. In summary, the authors conclude that “females exposed to teacher strikes during primary school have more children, less educated partners and lower per capita family income.”

So what lessons can we glean from the Argentina teacher strikes for our pandemic situation today?

The first is that the more days of instruction students lost, the larger the negative effects they suffered. For those of us living through the current pandemic, that means we should do everything we can to get kids learning as much as possible. That is, every additional hour of instructional time we can give kids today will pay dividends for them down the road.

Second, this study is yet another example of why our recovery efforts have to focus on the most disadvantaged students. According to data from Harvard University’s Opportunity Insights Economic Tracker, during the peak of last spring’s school closures, American students in high-income zip codes made more progress in online math courses than they had while they were in school. In contrast, students from low-income zip codes were making much less progress during the shutdowns. We have to acknowledge these disparities and target our resources accordingly.

Third, the Argentina study is helpful in that it shows both short- and long-term consequences of educational disruptions. Test score declines in the fall or spring may be an early indicator, but if we fail to act and choose to disregard any short-term results, we will be harming this generation of students for the rest of their lives.

Fourth, this study does offer one hopeful note, which is that there are large gains to be had by addressing any short-term gaps. With millions of Argentinean children affected, Jaume and Willén estimate that the strikes reduced the Argentinean economy by more than $700 million a year. But here in the U.S., we have about 15 times as many public school students and an economy more than 40 times as large. If American policymakers have a hard time focusing on children at the moment, this study helps make an economic case for why they are worthy of large investments.