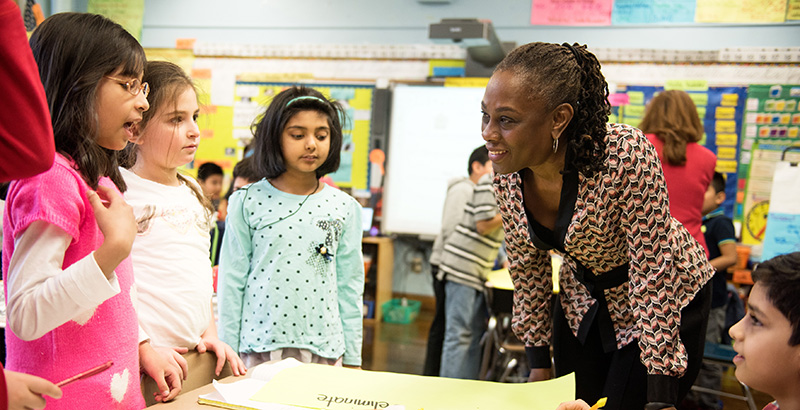 See previous 74 interviews: Sen. Cory Booker talks about the success of Newark’s school reforms, researcher Gloria Ladson-Billings on culturally relevant teaching and the role of teachers in Trump’s America and Chicago Public Schools CEO Janice Jackson on getting more students to and through college. The full archive is right here.

New York City’s First Lady Chirlane McCray spoke to the United States Conference of Mayors in Washington, D.C., last month to make her case for public investment in social and emotional learning in K-12 schools throughout the country.

The growing field promotes strategies and curriculum to help students understand and manage their emotions, empathize and collaborate with others and be socially aware. An expanding body of evidence shows that SEL, as it’s known, has an effect on success in school, in college and later in life. McCray’s mental health agenda, ThriveNYC, has worked to expand social-emotional learning throughout New York City’s public schools, the largest in the nation, with some 1.1 million students.

ThriveNYC allocated just over $16 million for training and curriculum support for SEL in fiscal year 2020, about 6 percent of its budget. The dollar amount would have been higher, McCray explained, had the National University System, the creators of Sanford Harmony, a leading social and emotional learning curriculum, not committed an additional $5.8 million to help with the expansion.

Sanford Harmony had already trained 8,000 NYC public school teachers through other initiatives, according to a June press release from the office of McCray’s husband, Mayor Bill de Blasio.

@BilldeBlasio and @NYCFirstLady share how they stand behind revolutionizing the NYC school system by initiating the nation’s most comprehensive approach to #SEL in every classroom in this @FortuneMagazine article. #emotionsmatter @YaleCSC @YaleEmotion https://t.co/MUIx0uMzi8

So far, 600 new teachers have received training through Sanford Harmony and Long Island University, McCray told The 74, and similar-sized cohorts will go through the training next year and the following year.

However, the best way to deal with mental unwellness and its effects — including those behaviors that might land a kid in the principal’s office or police custody — McCray told the gathered mayors, is to treat the issue “upstream,” at the very young ages when signs first begin to show.

McCray spoke to The 74 about the expansion of social and emotional learning and how she became convinced that it was an essential mental health component for all of New York City’s roughly 8.3 million residents. The interview has been lightly edited for length and clarity.

The 74: Tell me how you came to see this as a critical piece of a mental health initiative.

McCray: When I was a little girl growing up, I was one of the only black kids in the school. I got bullied a lot, people didn’t like the color of my skin, and there really wasn’t much intervention from the adults. It was very painful for me. But I also noticed that there were many children who were in distress and weren’t getting their needs met either. So it’s personal for me.

I’m also a mother, I’ve been a substitute teacher, and I’ve seen far too many instances where one child can disrupt the whole learning day. That child tends to get punished, sent out of class, suspended with no attention as to what went wrong. Maybe they had an argument with their parents. Maybe there was a loss in their family. We have 20,000 students living in shelters. They walk into class with so much on their mind.

Some children may be predisposed to mental health issues, and for some, their problems may come from constant stress. We can’t prevent everything, but we can give kids the tools to identify, manage and regulate their emotions.

Teachers can teach these skills, and once they do, our children will learn better. They will have higher achievement. There will be fewer disruptions, better test scores, higher graduation rates, fewer suspensions and shorter suspensions.

That’s a key point, I think. With social and emotional learning, you’re not just handing teachers one more thing to tack on to their day. You’re giving them a strategy to get better results on the things they are already trying to achieve. So how are you presenting this to schools? What does the rollout look like?

This is something I’ve wanted personally for a long time, but I knew it wouldn’t work unless everyone took ownership. We had a lot of discussions with teachers and the teachers union as well as administration and the [NYC public schools] chancellor, because it would be an investment for all of them.

I was happy to find that everyone wanted to do it. Everyone feels better about education when we don’t have to be harsh disciplinarians or operate in crisis mode all the time. They just wanted to make sure there was enough support. At the first training with Long Island University, we had 600 teachers, and they were hungry! They have wanted this for so long.

We were prepared as a city to do this on our own, but Sanford Harmony — I call them the “angels”— is helping with the cost of training all our elementary school teachers, and training them to train others so that this will be an economically sustainable program as well as part of the fabric of the school system. Once we start, we don’t want to go back.

Did you see any particular research that led you to focus on the early years for social and emotional learning?

When we launched universal pre-K, we included an evidence-based social and emotional learning component, and it has been very effective. We have a generation of kids who are now growing up with these skills, but we aren’t only focusing on the early years. We have teachers trained in restorative justice in 105 middle schools and 192 high schools.

So how are the mayors responding to your call to invest in this?

It’s been fantastic. They are hungry for alternatives to the traditional approaches. Many of them do not know that half of all lifetime mental illnesses show signs before age 14, so the mayors are just now seeing how important their schools are in supporting mental health. Questions about cost and “how to” have not really come up, because it’s just such a new idea for so many.

At the same time, given the problems with staffing, creating community hubs, and some of the issues that ThriveNYC has run into as it tries to build out the other initiatives, it seems like schools would be a relatively easy place to start.

You would think, but this has actually been harder than some of the other initiatives. With 1 million children and more than 1,800 school buildings, there are a lot of players. If I’d have had my druthers, this would have been the first thing we did!

The school system is a super tanker, and it takes time to move it. At the same time, you can’t just get the chancellor on board and expect change. Every school, region, district and borough is a community, and we need to take the time to get them on board. We’re asking people to do something very different, and that takes time.

To Build Emotional Intelligence in Students, Start With the Adults. SEL Pioneer Marc Brackett Helps Schools Do Both in ‘Permission to Feel’