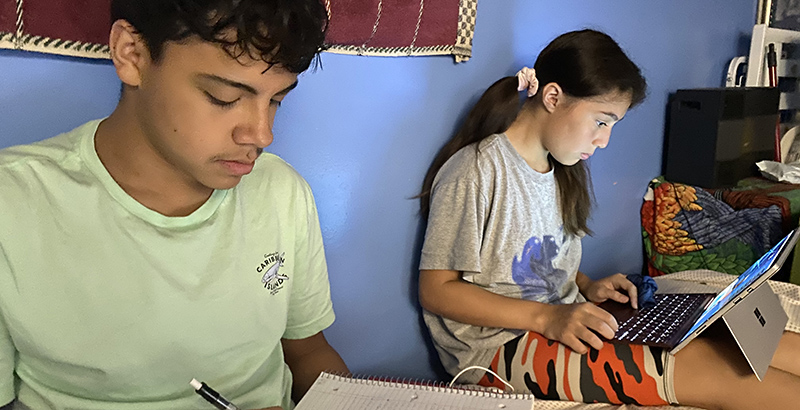 Senior Alcides Lopez (left) does his schoolwork alongside his younger sister. (Photo courtesy of Alcides Lopez)

Since the first day of school in D.C., Charday Eury has been waiting on laptops for her 10-year-old twins with autism — and answers to why one hasn’t resumed his inclusion classes.

Sophomore Alejandra Gonzalez, who moved to the U.S. four months before the pandemic hit, sometimes struggles to communicate with her non-Spanish-speaking teachers.

Alcides Lopez, who yearned for a senior year filled with last-year-of-high-school rituals, is instead overseeing his younger siblings’ academics and serving as his parents’ translator.

Ayana Osborne hasn’t been able to have her mother babysit her older children at the homeless shelter where the family lives because of a strict no-visitors policy, creating logistical problems as she picks up necessities such as medication.

For these four D.C. parents and students interviewed by The 74, shifting to remote learning in the spring was a trying experience. And two weeks into the new school year, fall is a mixed start.

D.C.’s school system, which is virtual until at least Nov. 6, has promised more stability and structure for the fall, though there are still many students waiting on devices. Some charters are starting to offer in-person learning in small groups for high-needs students — something Mayor Muriel Bowser said D.C. Public Schools “should do.” The city is also working to address wide gaps in Wi-Fi access with a new free internet program for up to 25,000 eligible families.

For Osborne, providing the best learning opportunities for children right now requires schools and other D.C. agencies to be working together — not in siloed roles.

If “systems are integrated, we wouldn’t have so many gaps and problems,” she said.

Eury has mixed feelings about a second stint of virtual learning, especially as the mother of children with asthma and 10-year-old twins with autism.

The two fifth-graders, who attend a Ward 4 charter school, have experienced different roadblocks — and occasional triumphs — with remote learning. (To protect their privacy, Eury asked that their names not be used in this article.)

One of the twins, who Eury says is “higher” functioning, has been stuck in special education classes during virtual learning, even though he used to join his general education peers for morning read-aloud and English language arts prior to the pandemic. So far this school year, “no one has mentioned” opportunities for him to rejoin, Eury said.

She added that he’s now “not ready” for general education math classes either — a transition the family was pushing for prior to COVID that would have required dedicated one-on-one supports.

The limited social interactions with friends and staff are tough on him too. “He’s who they call the mayor of his school; he knows everybody’s name on a first-name basis,” she said. 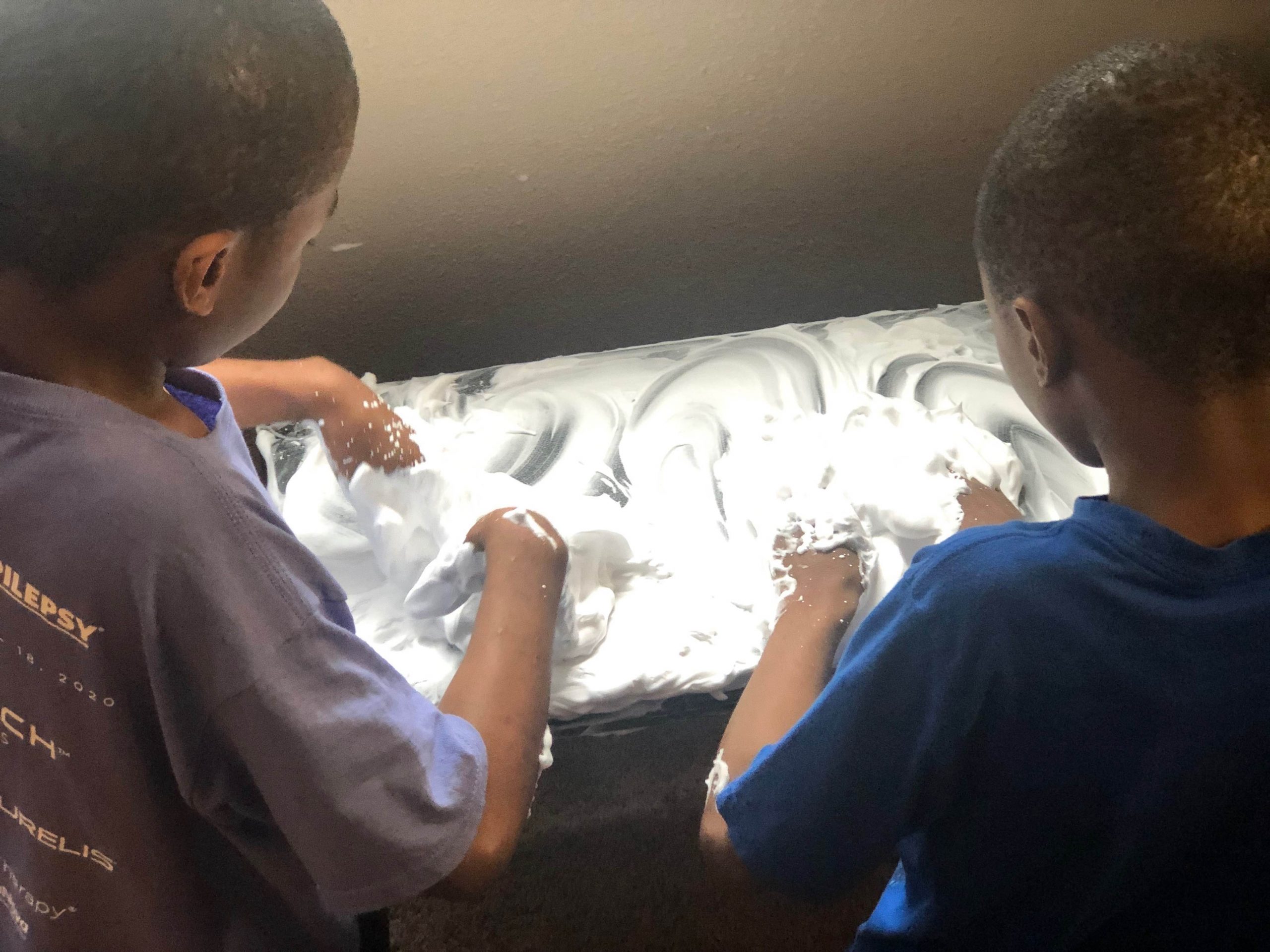 For the other twin, who Eury said is “lower” functioning, going virtual has spurred progress, especially with Eury working from home and able to help guide his learning.

He’s also not having as many seizures or asthma attacks. “Schools nowadays, they don’t have windows that open, so their ventilation system, their air quality is poor,” Eury said. At home, she is more in control, swapping out aerosols like Lysol for EPA-certified disinfectants.

About two weeks into the new year, certain days are better than others.

While her sons have speech and occupational therapies twice a week, their school day is over by lunchtime, leaving holes in the afternoons. Eury is still waiting on Chromebooks from their school after the twins broke a laptop and a tablet in the spring; they currently use iPhones. One of the boys, who struggles to adjust to scheduling changes, derailed into “full-speed hurricane mode” one morning when there was a half-hour break between classes.

Asked whether she was optimistic if the fall semester would be better than spring, Eury said she’s “on the fence” for now.

“It’ll take three or four weeks to see how it’s going, how it’s flowing,” she said.

Gonzalez has spent about half of her schooling in the U.S. outside of a classroom.

The 16-year-old, knowing no English, had just moved to D.C.’s Ward 5 from El Salvador in November. Four months later, an already unique learning experience was further turned on its head when students went remote.

Gonzalez is in an English as a Second Language program at her charter school — one of about 10,000 ELL students in the city. Although she is still looking forward to the school year, she said she worries that online learning exacerbates language barriers and limits the English immersion opportunities that she needs to become a proficient speaker. 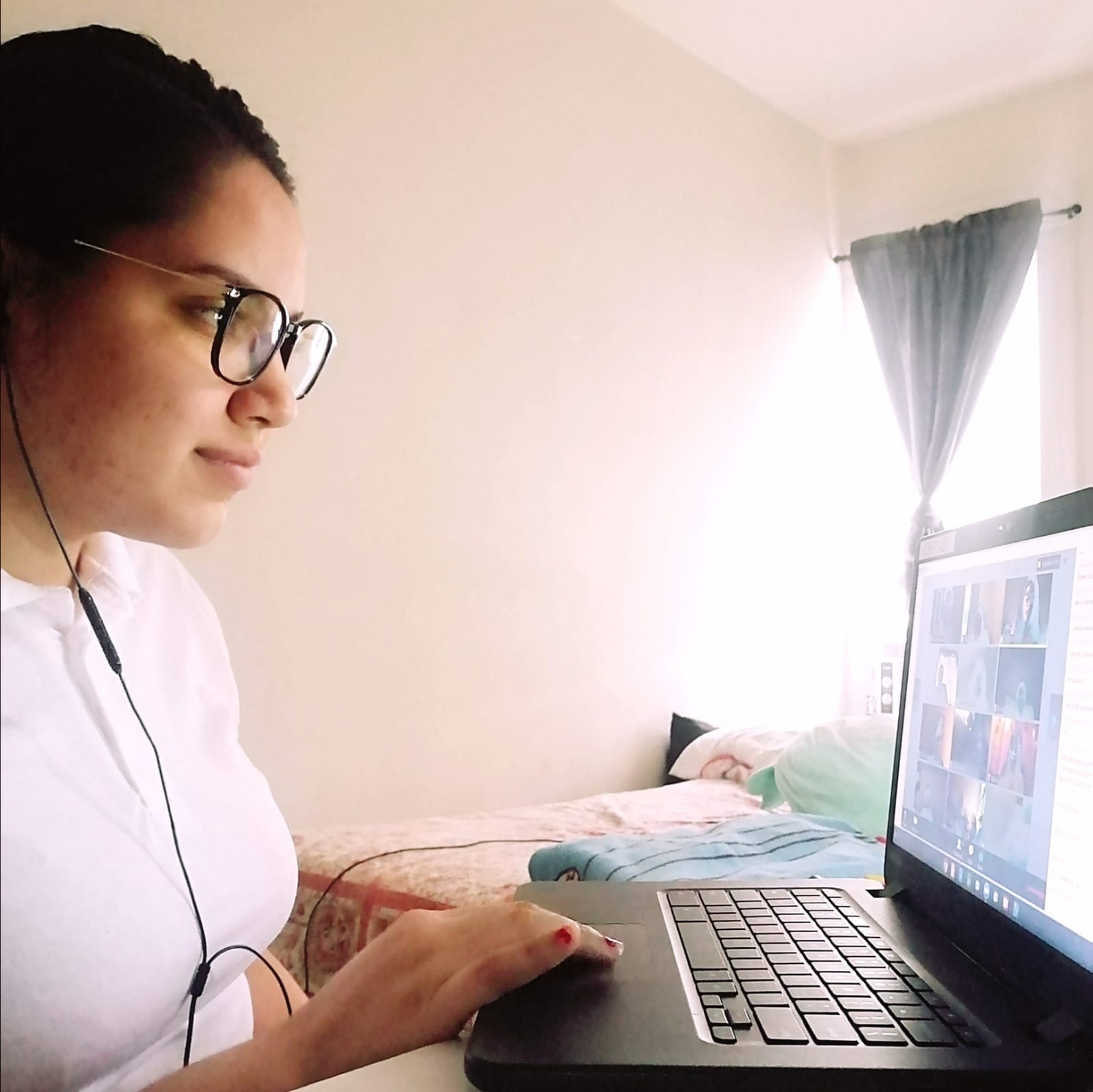 “Everything is new,” she said in Spanish through a translator. And with virtual learning, teachers “can help you, but not a lot, because there’s a lot of students. I can’t interrupt the class every time that I need [help].”

Being in an ESL program means Gonzalez has access to Spanish-led courses in some subjects. Still, about half of her teachers this year — in English, gym and health — speak little to no Spanish. In some of those cases, she said, she worries that there’s a “lack of willingness to help specific students” like her who need more personalized attention.

The first few days of school, for example, her health teacher “would just take away points because I wasn’t doing the right things, or I wasn’t understanding the procedure of the class,” she said. 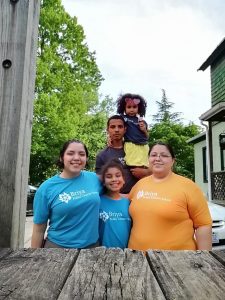 Gonzalez (left) and her family. (Photo courtesy of Zulma Barrera)

Often, Gonzalez leans on other students who are bilingual, or she asks her mom, who has limited proficiency in English. While Gonzalez said she doesn’t feel as if she’s fallen behind in terms of reading English, she’s “falling behind in terms of actually speaking it and hearing it” by spending class time at home versus in a school environment.

“I’d like more interactive classes” that encourage students to talk with one another, she said.

Even with the uncertainties, she’s still eager to learn, especially in her history, chemistry and English courses. On a Zoom call one night, she was still wearing her black school uniform, speaking a mile a minute in Spanish, emoting enthusiastically with her hands.

Instead, the 17-year-old — on top of his virtual schoolwork — is a translator for his mom and dad and a go-to support system for his younger siblings.

His parents, also from El Salvador, do not speak English, and they work out of the house as a construction worker and a cleaner.

The week before school started Aug. 31, Lopez, who attends Columbia Heights Education Campus, was busy “making sure that everything was good for my siblings.” He’d picked up two laptops and a hotspot from school after filling out the district’s tech survey. He’d called his 12-year-old sister’s counselor later in the week to clarify her class schedule. 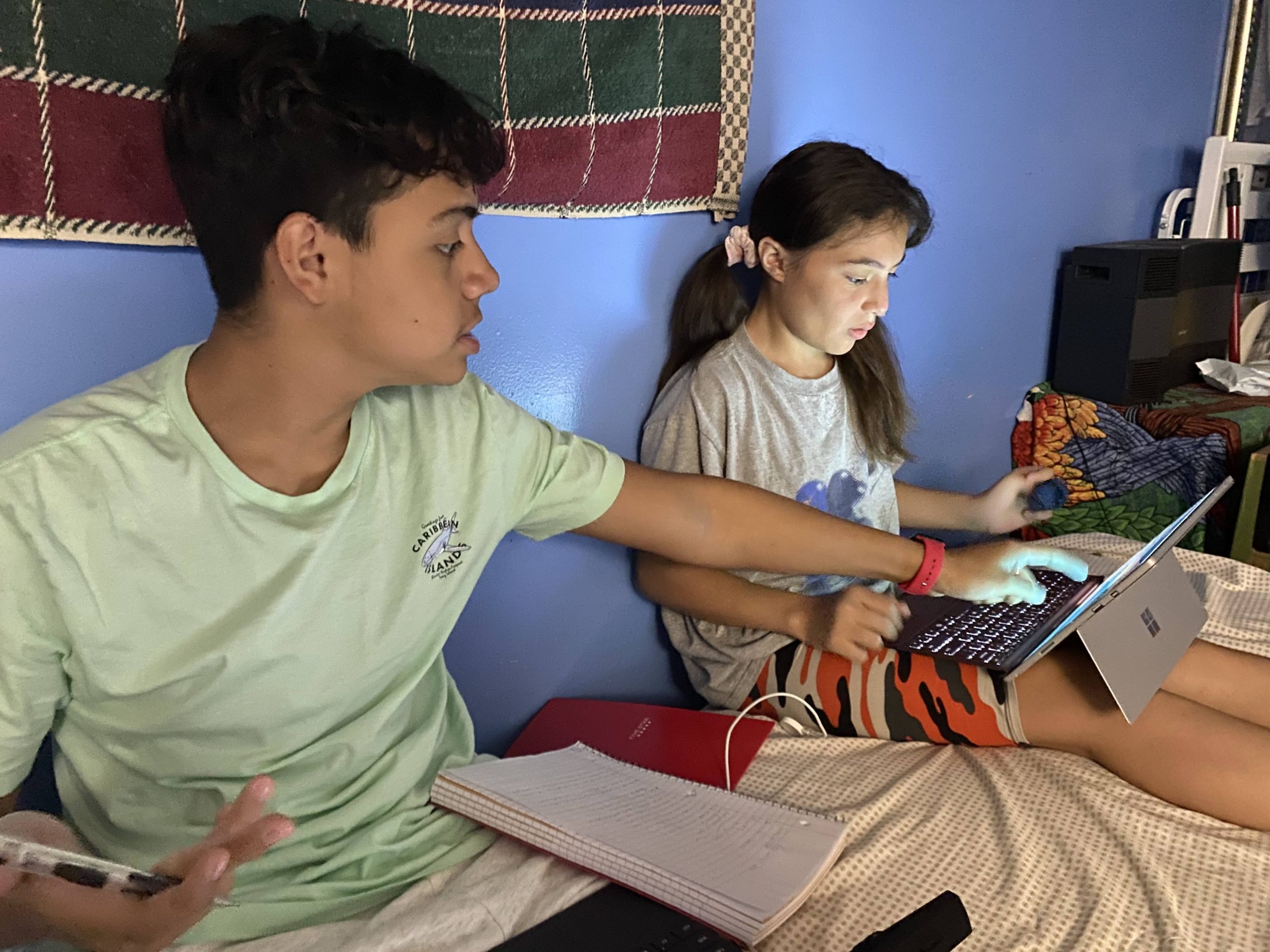 Lopez reaches over to help his sister with an assignment. (Photo courtesy of Alcides Lopez)

Because of the language barrier, “our parents don’t even know most of the important news about our school,” Lopez said. In spring, when his parents would get messages or phone calls from teachers, he’d have to translate. “There’s pressure on me to … interpret for them.” 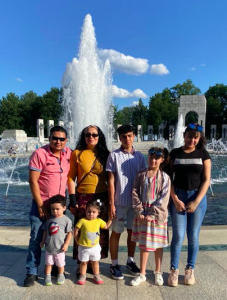 Lopez (center) with his parents and siblings near the Washington Monument. (Photo courtesy of Alcides Lopez)

On top of making sure his school-age siblings are logging in, he’s also lending a hand to his mother’s cousin, who’s babysitting the family’s 2-year-old twins during the day. He checks in at lunchtime — Have they been fed? Are their diapers changed? — and helps her find their bottles, shoes and toys when she needs them.

Virtual learning itself, Lopez noted, is shaping up better than in the spring. He now understands how he’s being graded. He and his siblings have their own laptops instead of sharing one old one. He’s really excited about one class, AP Studio Art, which incorporates photography.

But Lopez is itching to be back in a classroom.

“The hope I have right now is that in November we go back,” he said. “I really want to go back. So badly.”

The first few days of school for Osborne have underscored the need for more control over her family’s housing situation, especially during virtual learning.

Osborne and her four kids, three attending DCPS schools, have been homeless since December. They moved to an apartment-style shelter in Ward 8 in June after a months-long stay at a hotel, where her oldest children would use the two public computers. 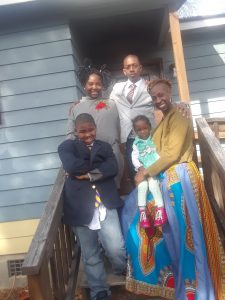 Staying at the shelter comes with rules: No visitors, and kids can’t be left alone. These restrictions came to a head the morning of the first day of school on Aug. 31, when Osborne’s mother came by to watch the children while Osborne ran errands, but she wasn’t allowed entry.

Osborne has been floored by the lack of accommodations for a parent in her position. She can’t be homebound for the duration of the school day. She has errands to run and is working toward her family peer support certification so she can get a job.

“At the end of the day, barriers are being created,” Osborne said. “Just to take care of simple needs, they can’t be in school with me running around.”

“A D.C. public schools representative should be involved [in] what’s going on in the shelters, what’s [being done] to provide the most adequate education for these children,” she said.

(Both DCPS and the D.C. Public Charter School Board have “dedicated staff that serve as liaisons” to the D.C. Department of Human Services, the Deputy Mayor for Education’s office said. In DCPS’s case, at least, those staff are in touch “basically every day.”)

Luckily, for Osborne’s family, there seems to be a light at the end of the tunnel. A landlord of a five-bedroom home in Ward 8 has accepted her housing voucher. Osborne has moving boxes already prepped in the corner of their shelter apartment.

“I’m just holding on for right now,” she said. Then “I’m not here under someone else’s rules.”