As D.C. Scrambles to Get Thousands of Students Laptops Before Monday Start of School, Many Parents Still in the Dark If Their Kids Will Get Them on Time 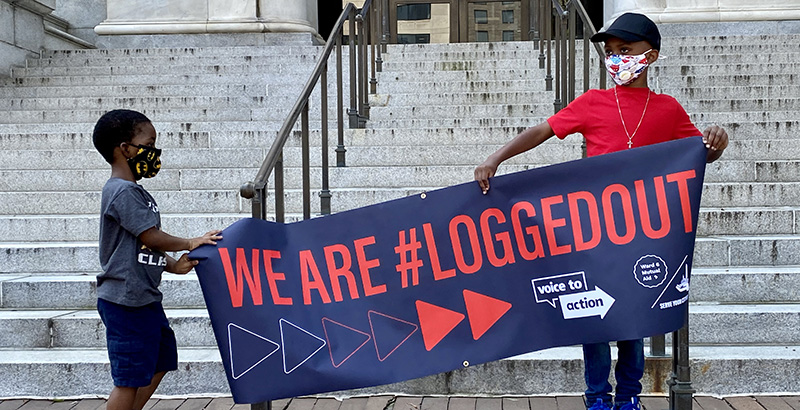 Update Aug. 28: Soon after the story published, Patricia Stamper received a call from her son’s school, telling her they had a device for him.

The D.C. Public Schools system is scrambling to get laptops to thousands of students this week before the virtual start of the 2020-21 school year on Monday — but many parents remain in the dark as to whether their kids will have laptops and high-speed internet by then.

The district “is working to ensure new devices arrive at schools in time for the start of school,” a DCPS spokesman told The 74. Schools Chancellor Lewis Ferebee reiterated this point at a Wednesday press conference, stating that “the expectation is that all of our device distribution begins and ends prior to the start of school.”

DCPS, he added, would begin the new academic year “strong.”

But although DCPS has committed “to providing a device for any student who needs one,” advocates like Pranav Nanda, a lead organizer with the Ward 6 Mutual Aid Network and Serve Your City, say it’s become increasingly clear that the district’s 52,000 students are not all ready for Day 1.

The chancellor’s statements do “not give me any sense of confidence,” Nanda said. “What if a parent doesn’t find out about tech distribution this week — what’s the plan going forward for that?”

Sixty percent of 32,500 respondents to a DCPS tech survey have indicated a need for a device like a laptop at home; 27 percent said they didn’t have reliable internet.

Around the time Ferebee was speaking on Wednesday, a mother of three who struggles to pay $10 a month for a basic internet plan was sharing her fears of being disconnected at a small rally near the White House. Another parent, Patricia Stamper, had decided to spend her own stimulus check on a tablet.

D.C. Council Chairman Phil Mendelson, who told The 74 he’s spoken with the chancellor and Deputy Mayor for Education Paul Kihn about technology “over and over” for months, said cases in which students haven’t received devices appear unrelated to resource issues and are more likely “a deployment issue … that the distribution of [devices] has not been perfect.”

DCPS, which intends to operate fully virtual through at least Nov. 6, has said it’s investing $17 million in technology for remote learning. A DCPS spokesman confirmed Wednesday that the district currently has 45,000 devices — many pre-equipped with high-speed internet.

“It’s a big bureaucracy,” he added. “The head doesn’t always know what the tail is doing.”

The transition to all-virtual learning hasn’t been a seamless process for many school districts nationwide, though issues seem to be more linked to supply chain backlogs than distribution. Cleveland’s school district, for example, recently learned it won’t be receiving 9,000 laptops by its first day on Sept. 8.

Advocates like Nanda believe D.C. and school leadership could have been more proactive in getting families online. Instead, he said, groups like Serve Your City are rushing to distribute 200 backpacks with laptops and other school supplies to high-needs families, with more than 500 requests so far. Other families are taking to Twitter with complaints of just now learning that their child’s laptop may not fully satisfy the system’s requirements for virtual instruction.

City and school officials “had since March to figure this out,” Nanda said.

Delays are ‘not fair to our children’

A group of parents at Wednesday’s rally said they were still waiting for answers on whether they’d have a laptop and high-speed internet for the first day of school.

Patricia Stamper, a teacher at Miner Elementary School, said she recently spent her federal stimulus check on a tablet to ensure she wouldn’t have to share her work computer with her 5-year-old son again, like she did in the spring.

“As a parent, I don’t understand” the delays, said Stamper, who’d filled out DCPS’s tech survey. “[I enrolled my son] before school let out last year, so there’s no reason why my kid shouldn’t already have his laptop.”

On top of questions about distribution, there has also been confusion around whether devices families already have are appropriate for online instruction.

DCPS posted a document in mid-August outlining the laptop specifications optimal for its virtual learning platforms: 4 GB of memory — 8 GB preferably. A “highly recommended” touchscreen device for grades pre-K through second grade. A camera. Chromebooks and Kindle Fires, it warned, do not support “full versions” of some online applications.

“I suspect there are going to be a lot of parents who scrounged for a cheaper Chromebook (saw tons of parents checking them out at DCUSA Best Buy the other day) only to discover they aren’t suited for Teams/Canvas/MS Office,” one parent wrote in a thread. “It feels like DCPS is ill-prepared.”

It feels like DCPS is ill-prepared for this fall of remote learning. Yet they’ve known it was coming for months. Why no dry-runs of technology this week or next? Why the late teacher assignments? So many unknowns just a week before an unprecedented schoolyear. /end

It’s “good” that the district released the guidance, said Grace Hu, a parent with Digital Equity in D.C. Education, which has been calling for a 1:1 student-device ratio. But she added that because DCPS “made a judgment call about what learning apps and what software” to use, officials “have an obligation to make sure everyone has a computer that can use that.”

A DCPS spokesman said the 10,000 devices the district distributed in the spring — and the 45,000 it has for this fall — meet the standards. Families “can contact their school to share that they are in need of a device if they previously indicated they did not need one,” he added.

Parent Michelle Blount, who also spoke at Wednesday’s rally, has devices for her second- and ninth-grader children. But unreliable internet, which hasn’t been fixed, severely hindered her 7-year-old autistic son’s ability to learn in the spring. She’s worried it’ll happen again.

Michelle Blount at the rally:

She took a breath, glancing behind her where a group of young children were playing. “It’s just so frustrating for me.”

A national analysis found that more than 20,000 D.C. children do not have access to high-speed internet. Deputy Mayor Kihn on Wednesday said D.C. government has allocated more than $3 million to pay broadband/cable bills for high-needs families — an initiative that is in the process of launching.

Blount said she hasn’t heard anything about that yet.

“If it is [happening], they need to put it out there more,” she said.

Correction: An earlier version of this story quoted a parent whose child does not attend D.C. Public Schools. The quote was removed and the headline has since been changed.