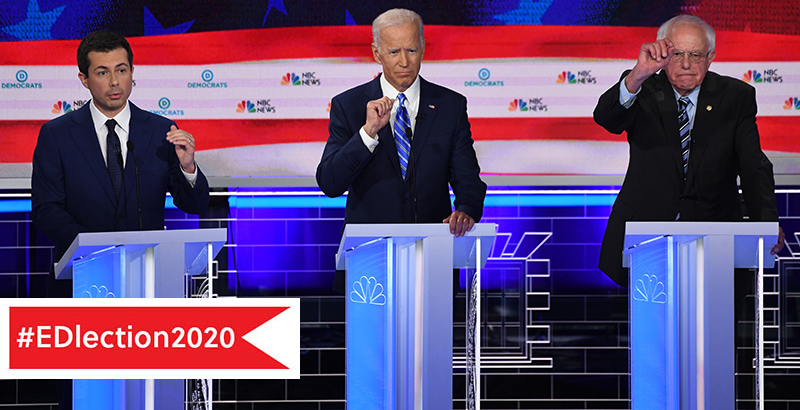 EDlection 2020 pop quiz: What do the K-12 platforms of Joe Biden, Bernie Sanders and Pete Buttigieg have in common?

Answer: They all want to increase spending on Title I, the federal grants started in the 1960s to boost the education of low-income children.

Biden and Sanders want to triple the funding, currently $15.9 billion a year, while Buttigieg seeks to “massively increase” it.

It’s a politically expedient proposal: Title I is a generally popular program in Congress, and there’s support among voters, across party lines, for additional spending on education.

But pushing more money through the program, without accompanying reforms, might not make any difference for the children it’s supposed to help, experts said.

Title I is the largest portion of the Elementary and Secondary Education Act, which originated as part of President Lyndon Johnson’s War on Poverty. It has become the anchor for some of the biggest education policy changes in the past two decades, No Child Left Behind and the Every Student Succeeds Act.

Questions about the program have trailed it since its inception, such as whether it reaches the neediest children or schools use the funds appropriately. One district in Louisiana infamously used Title I dollars to purchase two Olympic-size swimming pools.

Research about the program’s effectiveness has varied. A 2015 Brookings Institution paper, for instance, argued that the activities Title I dollars often go toward, like professional development and class size reduction, aren’t effective, and that districts should have the flexibility to better concentrate dollars on the highest-poverty schools and students.

Nonetheless, the candidates’ plans are an important signal about the importance of education funding, said Scott Sargrad, vice president for K-12 education policy at the CAP Action Fund.

But given that more than 90 percent of school districts already get at least some Title I dollars, “that’s not going to improve equity if we keep sending money to districts that don’t really need it,” he added. A 2016 investigation by U.S. News and World Report found that districts with very low rates of child poverty often end up with very high annual allocations.

Part of the problem is the complex way Title I is distributed to schools, through four subgrants that all weight the number and percentage of poor children differently. Some also give more federal dollars to schools in states that spend more. And some set minimum allocations for small states, regardless of their relative level of poverty.

That means the pool of federal dollars varies by state, from $984 per eligible child in Idaho to $2,590 per child in Vermont, and within states, with big cities and the furthest-flung rural areas generally getting the most per student, the National Center for Education Statistics said in a recent report.

Barnard: To Ensure Equitable Funding for Low-Income Students, Fixing Title I Isn’t Good Enough — It Needs to Be Rebuilt From Scratch

Big-city districts in the Northeast probably already spend enough on low-income children, but additional funds could have a big impact where spending is lower, like in the Deep South, said Mike Petrilli, president of the Thomas B. Fordham Institute. (Spending per pupil in Washington, D.C., for instance, is more than double that of Mississippi: $19,159 versus $8,702 in 2016.)

If state accountability systems remain strong, the additional spending could help, he said: “The details matter, and it matters about where that money ends up.”

Outside of changing the formulas, education policy advocates suggested several other possible policy changes, like pushing the additional money into states’ set-asides for school improvement. Or, now that ESSA requires states to publish per-pupil funding figures by school, it could be used to boost spending at schools that lag behind others in their districts.

Some conservatives, meanwhile, are skeptical of calls for additional spending in an era of ballooning federal debt, and they fear that additional Title I dollars would come with too many federal strings attached. School district leaders have long complained about onerous reporting requirements and auditing oversight.

Title I, a small portion of overall education spending, already drives too many decisions at the district level, in ways that often “seem to reflect something other than instructional logic,” said Rick Hess, director of education policy studies at the American Enterprise Institute.

“The idea that what we need is more federal micromanagement of spending seems to me a very clear step in the wrong direction,” he said.

To be sure, plenty of research shows that money matters in education, and Title I would be an easy way for the federal government to demonstrate that.

But there’s also precedent showing that adding money through Title I doesn’t bring big changes at the school level: Congress in 2009 poured an additional $13 billion into the program at the height of the recession, and most states didn’t do anything particularly innovative with the money, Barone said.

Ultimately, the call to increase Title I funding without accompanying reforms fits within a broader pattern of education policy proposals this cycle, which have focused on additional federal investment without demanding accompanying changes, Barone said. That includes plans like increasing teacher salary without targeting it to in-demand fields like special ed or STEM, or reducing student debt without discussions of how to remedy low college completion rates, he said.

“It’s more of like a Santa Claus approach to education policy, where we’re just going to put money basically through existing streams, or ramped-up versions of existing streams, and not ask for anything necessarily in return,” he said.

WATCH: Everything You Need to Know About Title I — and the $15 Billion It Directs to American Schools — in 2 Minutes