After Walking Out and Sitting In, Student Activists File Civil Rights Complaint Against Selective Admissions at NYC Schools 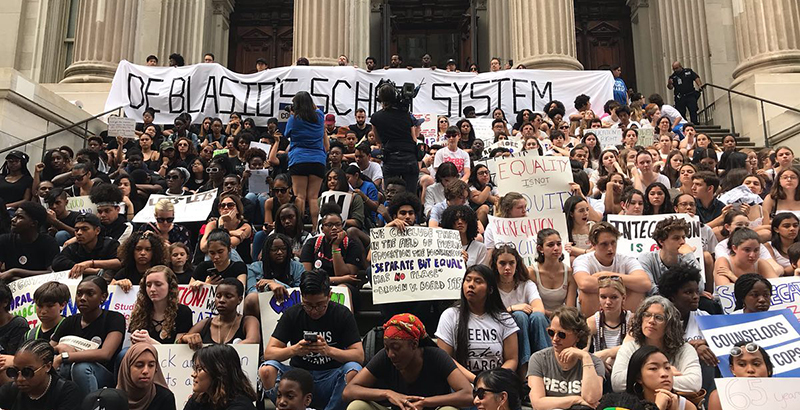 In June 2019, weeks after the 65th anniversary of the Brown v. Board of Education Supreme Court ruling, Teens Take Charge led more than 200 New York City students in a demonstration against segregation in the city’s school system, symbolically positioning mostly Black and Latino students on the left side of the Tweed Courthouse steps and mostly white and Asian students on the right (Teens Take Charge via Facebook)

Teens Take Charge, a New York City-based youth organization advocating for educational equity, filed a federal civil rights complaint against the city’s Department of Education Monday alleging that the use of admissions screens for public high schools has a discriminatory impact on students of color.

The complaint filed with the U.S. Department of Education’s Office for Civil Rights is the student-led group’s most recent move in a series of high-profile protests against inequity in New York City schools, which holds the distinction of being both the nation’s largest district and one of its most starkly segregated. Since 2019, Teens Take Charge staged seven “Strikes for Integration” that mobilized over 2,000 youth, held a roundtable with education leaders in the city, and organized a sit-in at City Hall.

“We’ve done all we can,” member and Teens Take Charge press representative Sophie Mode told The 74 Monday. “It’s not right that high school students have to sue their government to get justice.”

The filing of the complaint comes as the worsening pandemic forced city officials to announce Wednesday that schools will be closing, and also as Mayor Bill de Blasio and Schools Chancellor Richard Carranza mull a decision about admissions in the city’s schools for the 2021-22 school year. COVID has made some elements of the previous admissions system unworkable and put the process in limbo. Currently, more than 20 percent of public middle and high schools use screens in their admissions, which take into account factors such as attendance, punctuality, grades, and state test scores. The city’s eight specialized high schools, including the elite Brooklyn Tech, Bronx High School of Science, and Stuyvesant, rely on a single entrance exam which has produced offers of admission to very small numbers of Black and Hispanic students. Teens Take Charge and the de Blasio administration have both challenged the high-stakes test, but it remains codified in state law.

Now that COVID has forced the city to re-examine the admission practices it does control, they must also consider the discriminatory effects of screening practices, argued Teens Take Charge’s legal team.

“Any change to admissions policies must not only account for the challenges of the pandemic, but must also remedy the unlawful racial inequity baked into the system,” said Allison Scharfstein, a member of the New York University Civil Rights Clinic that is representing the student-led group. “We filed [Monday] to ensure that this discriminatory system does not harm yet another group of students simply seeking access to a quality and integrated public education to which they are entitled.” 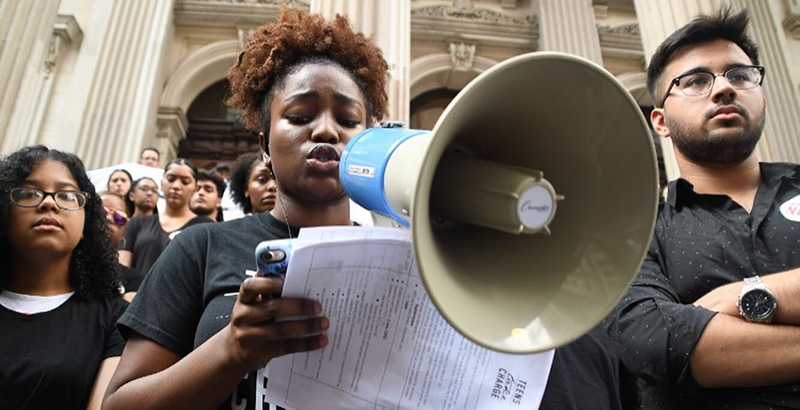 The youth-led organization’s complaint cites data from the 2020 high school admissions cycle, alleging that the racial disparities in admission rates violate Title VI of the Civil Rights Act of 1964, which prohibits racial discrimination in any program receiving federal funds. 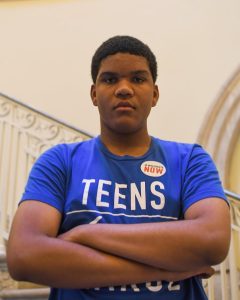 “As students, we always knew screens were discriminatory,” said Brandon St. Luce, a student at Edward R. Murrow High School and Teens Take Charge leader. “Earlier this fall, we got the proof. The DOE’s own numbers show that admissions screens lead to rampant racial discrimination.”

For example, at two sought-after screened high schools, Baruch College Campus High School and Eleanor Roosevelt High School, Black and Hispanic students made up about 40 percent of applicants, but accounted for less than 10 percent of offers at each school, according to Teens Take Charge. At another screened school, Frank McCourt High School, the admission rate for white students was five times that of Black students. 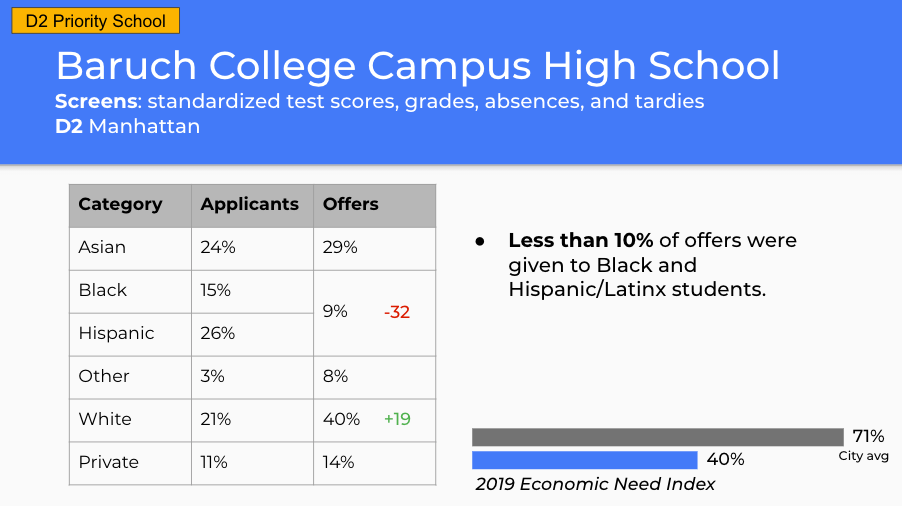 A slideshow published by Teens Take Charge illustrates the racial disparity in admission at screened schools.

New York City Department of Education representatives did not respond to questions from The 74 asking whether screening practices have a segregative effect. However, they did note that under the current administration, a number of initiatives have helped schools prioritize vulnerable students in their admissions processes and no new screened programs have been added.

“Our classrooms are stronger and more supportive for all students when they reflect the diversity of our city, and we sincerely value student voice in our ongoing efforts to advance equity,” department representatives wrote in an email. “We continue to make our admissions policies more inclusive, accessible, and equitable, and we are already seeing promising results.”

Regardless of district efforts, the civil rights complaint looks to prompt a federal investigation of screening practices in New York City schools, explained Mode. If the investigation finds such practices violate Title VI, schools using admissions screens would have to change their policies or risk losing federal dollars.

In place of current admission practices, the student-led group suggests an “educational option model” where schools would take students whose test scores fall across all portions of the bell curve in representative numbers, meaning 16 percent of admitted students would perform below-average on state standardized tests, 68 percent would receive average scores and 16 percent of students would score above average on state tests.

According to Mode, this alternative model “would mitigate the worst effects of using standardized test scores for public school admissions and provide the first step toward racially integrating New York City schools.”