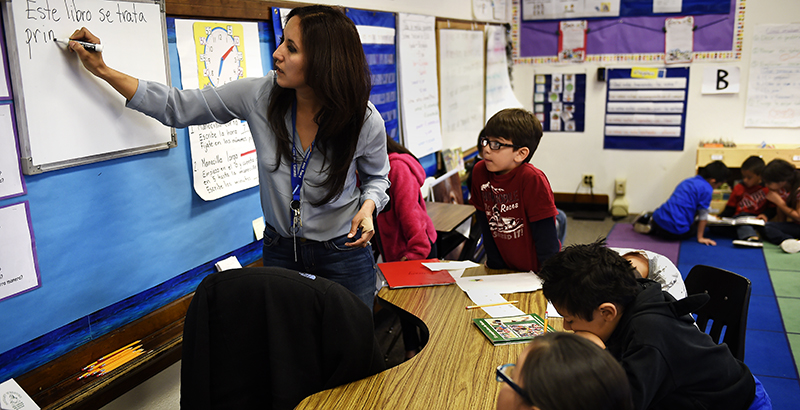 I spent a day on the National Mall with a diverse group of elementary school children last fall. Their class was on a field trip. As we walked past the U.S. Capitol, a small Latinx boy turned to me with wide eyes. “Is that Donald Trump’s house?” he quietly asked in Spanish. “No,” I said. “That’s where Congress meets. It’s a different part of the government.”

He bit his lip. “I hate Donald Trump,” he muttered, his face an angry scowl. I asked if he wanted to talk about it. He did. Then he didn’t. He couldn’t.

It’s a hard time to be in an immigrant family in the United States. It’s a particularly hard time to be a native Spanish-speaking child of immigrants. In a moment of searching debates around the nature of the United States’ common identity, these children can struggle to see a place for themselves here. There’s no question that our schools are struggling to recognize and support English-learning children of immigrants in the Trump era. Teacher surveys from UCLA’s Civil Rights Project reveal that these children appear to be suffering from significant fear, stress and distraction in the country’s schools. In such a moment, these students must be a priority.

What to do? Here in the Washington, D.C., area — and across the country — dual language immersion schools have arisen as a possible answer. These schools aim to provide students like the little boy troubled by the president with linguistic and cultural affirmation while they also learn English. Designed and implemented well, these programs teach in two languages, and they enroll roughly equal numbers of native English speakers and native speakers of the partner language. Research suggests that this linguistic integration is the best way to support English-learning children, and it also helps English-dominant children become bilingual.

School integration that benefits all children and supports immigrant integration and academic excellence: It’s no surprise that these programs are popular. Unfortunately, high-quality versions of these programs are complicated to design and launch, particularly in light of the United States’ long-standing bilingual teacher shortage.

This combination — scarce, popular, beneficial to a diverse range of children — can also be a recipe for educational inequity. In some communities, interest from privileged, English-dominant families is displacing English learners from these programs and converting linguistic integration into opportunity hoarding.

This challenge is arising here in D.C. In response to growing parental demand, the D.C. Council is considering a bill that would expand the District’s number of dual language immersion programs. Unfortunately, rather than prioritizing the opening of linguistically balanced programs that would serve English learners and English-dominant students together, the draft of the bill promises to expand access to students “regardless of language spoken at home.” This would likely expand access to dual language programming for English-dominant children while consigning English learners to English-only schools. Indeed, this would accelerate the ongoing gentrification of English learners from the District’s neighborhood dual language schools.

This inequitable pattern reveals a lot about privileged local parents’ anxieties and how they shape policymakers’ priorities. What’s more, catering dual language immersion programs to English-dominant families actually undercuts the linguistic integration of these programs. Programs that enroll no native speakers of the non-English partner language (usually, but not always, Spanish) are not as effective at helping English-dominant children become bilingual. In other words, if schools prioritize serving native English-speaking children in these schools instead of aiming for linguistic integration, they actually wind up being less effective for those children.

This would be fitting irony — privileged parents hoard opportunities and displace historically underserved English-learning students in ways that actually undermine their own children’s chances of gaining the benefits of dual language immersion programming. But it is also a frustrating, and entirely unjust, response to a moment when the Trump administration is stretching legal boundaries to advance a comprehensive assault on immigrants’ pathways to integration and prosperity in America. From brutal family separations to concerted efforts to deter legal immigrants from using public health and nutrition programs, immigrants and their families are under enormous pressure.

Is it any wonder that my walking partner on the National Mall gazed on American democracy’s anchoring public institutions and felt despair?

These students deserve linguistically and culturally responsive schools now more than ever. Policymakers should use dual language immersion programming in the area’s district and charter schools to extend access to bilingual education to more English learners. It’s imperative that public schools in the D.C. region — that all U.S. public schools — find ways to prioritize these students’ health and academic, linguistic and cultural development. Expanding access for English-learning students in dual language immersion programs is an obvious, equitable place to start.