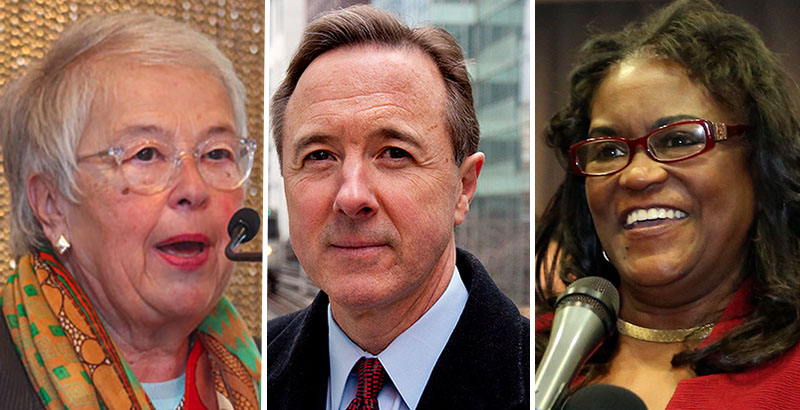 The recent announcement that Michelle King will retire as superintendent of the Los Angeles Unified School District by the end of the school year brought several months of uncertainty to a very sad end. A 33-year veteran of the district, King disclosed she was leaving the job to focus on treatment in the wake of a cancer diagnosis.

Coming after a leave of absence that went unexplained for four months, King’s revelation ended one swirl of speculation but triggered another: With seasoned urban superintendents in extremely short supply and LAUSD facing an avalanche of financial and political issues, who might be tapped to lead the nation’s second-largest school district?

Adding urgency to the question, in recent weeks the superintendencies in New York City and Chicago, the largest and third-largest U.S. school districts respectively, have also been vacated. Superintendents have long been in short supply and veterans of large urban districts even more so.

Even so, to have asterisks at the top spot of the three largest U.S. districts at the same time is unusual.

All superintendents are called on to manage daunting challenges ranging from increasing academic achievement to managing elected board members and union leaders and other would-be adversaries to operating a large transportation system. But the issues top leaders of the very largest school districts must confront often seem virtually insurmountable.

“It’s a lonely job and a very unique one,” says Mike Magee, CEO of Chiefs for Change, which provides training, mentorship, and advocacy for would-be state and district education heads. “Superintendents who exhibit bold and savvy leadership for more than a decade are outliers.”

The recent high-profile turnovers throw into relief the difficulty of identifying individuals capable of the array of skills the job requires — and of creating conditions where they can make the change they were hired to engineer.

Earlier in the month, Chicago Public Schools CEO Forrest Claypool stepped down amid accusations of ethics violations. He was quickly replaced by Chief Academic Officer Janice Jackson, a CPS grad.

All three districts are experiencing steep declines in enrollment, which translates to a revenue loss that compounds the financial blow of skyrocketing employee health and pension expenditures. With a collective enrollment of more than 2 million students, each serves mind-blowing concentrations of students in poverty, those with disabilities, and children who are learning English. All compete with charter and private schools.

The kicker: The more decisively a superintendent takes on the thorniest of these challenges, the more likely he or she is to see the support of the board members, themselves under pressure from fractious constituencies, erode. Average tenure is a little more than three years.

“It’s the political frame that tends to undo superintendents” and not the academic work, says Steven Tozer, a professor in education policy studies at the University of Illinois at Chicago and director of the Center for Urban Education Leadership.

Of debt and DACA

A popular hire who rose through the district ranks, King was LAUSD’s ninth superintendent in 20 years. Fierce disagreement over the role of charter schools dominated board politics during her two-year tenure, including a board election in which spending topped $12 million.

More daunting, King was tasked with attempting to close a budget deficit of $1.46 billion projected to accumulate between the 2016–17 and 2019–20 school years. Healthcare and pension expenditures currently consume 27 percent of state per-pupil funds.

With 1 in 10 Los Angeles County residents lacking legal residency and Immigration and Customs Enforcement (ICE) officers increasingly emboldened to monitor schools and other sites once considered off-limits, King was also on the front lines of an ongoing crisis touched off by the Trump Administration’s threats to end DACA and other immigration supports.

The L.A. board was scheduled to begin discussing search for a new superintendent this week. Longtime administrator Vivian Ekchian, who took over day-to-day operations when King went on leave, will remain acting superintendent for now.

Chicago’s schools are controlled by Mayor Rahm Emanuel, whose Board of Education is expected to confirm Janice Jackson’s interim appointment later this month. Like King, Jackson is an educator who rose through district ranks, a trajectory that has already prompted one city council member to describe her as the “anti-Forrest,” a reference to her predecessor.

Emanuel’s former chief of staff, Forrest Claypool cleaned up one scandal — the corruption investigation that landed his predecessor, Barbara Byrd-Bennett, in federal prison — only to find himself mired in another. Not an educator, Claypool resigned after accusations that he lied to investigators looking into a questionable contract.

Though the size of Chicago Public Schools’ financial cliff is hotly debated, Jackson told the Chicago Tribune she wants to decrease the amount the district borrows annually to less than $1 billion. The Chicago Board of Education had $6.2 billion of outstanding debt last year, according to a CPS report.

City and state leaders have battled over CPS’s demands for more state funding for years. Illinois lawmakers last year overhauled state funding, sending hundreds of millions more dollars to the district. Jackson will still have to contend with servicing existing debt and with the red-hot issue of closing underenrolled schools that languished during a moratorium on closures.

No candidate has emerged to replace Fariña, and indeed it’s tough to imagine the skill set a person would need to deliver results for more than 1 million students.

Navigating ‘a sea of political interests’

Some years ago the Center on Reinventing Public Education (CRPE) put out a survey of superintendents titled “The Impossible Job,” recalls Robin Lake, the center’s executive director.

“The way things are set up, from a political board, to community interest groups, to union politics, to state political dynamics, they really are navigating a sea of political interests,” she says, “while at the same time not really in control of their schools and able to serve their needy student populations.”

By way of illustration, Lake recounts a conversation she had with a district superintendent who had previously run a charter school management organization. “When I was running a district, I had a board that was focused on its political interests,” the leader told her. “At the charter management organization, it’s a mission-driven board, so it’s cohesive; we’re not stuck seesawing back and forth.”

In districts where schools chiefs report to mayors or to state overseers, the politics are just … different. Few superintendents start their jobs prepared to navigate them. But building some political capacity can have real payoffs.

Not the Same as the Old Boss: After Carmen Fariña, What Mayor De Blasio Will (and Won’t) Be Looking for in NYC’s Next Schools Chief

Lake’s CRPE colleagues Paul Hill and Ashley Jochim have released a report on ways in which superintendents can use political skill to get results. Hill cites several examples of superintendents who were able to negotiate wins on tough issues.

Fariña’s New York predecessor Joel Klein, for example, got the teachers union to break with the ironclad hire-by-seniority contracts of the past, and agree to allow principals and other school leaders to choose their staffs, by allying with teachers who wanted to choose their colleagues. In Denver, former superintendent Michael Bennet, who is now a U.S. senator, convinced the union to go along with performance-based teacher pay as part of a plan to raise district enrollment.

Cleveland’s Eric Gordon met frequently with principals to build their support, encourage initiative and risk-taking, and learn about ways the central office was getting in the way of promised school autonomies. In New Orleans, then–Recovery School District Superintendent Patrick Dobard pushed charter schools to give up some autonomy and to collaborate on special education.

It helps, Lake adds, to have one or more outside organizations shepherding the change: “Who holds the long-term vision for the school-improvement strategy? The superintendent can’t, because they may be gone in four or five years. The board likely won’t.”

Denver is a good example of a district where clarity among community leaders about the direction they want for the schools has helped to keep the work moving forward despite churn in the superintendent’s office. Current superintendent Tom Boasberg has been able to continue strategies launched under Bennet.

Chicago Public Schools has seen notable academic improvements despite having eight superintendents since Paul Vallas stepped down in 2001, says Tozer, in part because the district has placed a premium on building its principal corps, ensuring there are enough talented candidates for local school councils to find leaders who are a good fit.

“Every school district is a study between centralized control and local control,” he says. “Because the systems in Chicago are focused on high-quality building leadership, as [district] leaders come and go, they don’t mess with that.”

Hurdles notwithstanding, school districts still gravitate to searching for a new superintendent who can do it all, imagining a search firm or other intermediary might know of a potential leader whose unique combination of skills, personality, and vision will thread the needle.

Two years ago, a number of state and district leaders launched Chiefs for Change, an effort to prime a diverse pipeline of individuals poised to take top jobs and be effective leaders. The group also serves as a “community of practice” in which leaders can draw on one another’s experiences.

“It’s a really stressful job, and you need people who’ve gone before you to be successful,” he says. “It’s such a big deal if you have a set of peers you know you can talk to about your challenges. It’s the biggest factor, and it’s the one most people lack.”

The other two major components of success are a talented team and access to philanthropic support, he says. Struggling districts often lack top talent, and no superintendent can create change alone. Nor are state legislators and local taxpayers frequently willing to bankroll new superintendents’ ideas, and success breeds buy-in.

Right now, Magee’s network has 27 members. Chiefs for Change got more than 125 applications for its next yearly cohort of eight.

“The demand is high, and the caliber is top-flight,” says Magee.

In the end, Magee, Lake, and others agree, the job isn’t going to become less political — and perhaps it shouldn’t.

“My members spent a lot of time doing community engagement and doing a lot of board work,” says Magee. “They eat a lot of spaghetti dinners trying to create the relationships that allow you to go forward with the work.

“It’s challenging. Everyone deals with political firestorms of one kind or another,” he says. “But it’s the job.”