American schools received the latest ominous dispatch Wednesday from the National Assessment of Educational Progress, with twelfth-grade results from the 2019 exam showing stasis in math and statistically significant drops in English. In a trend carried over from other recent releases, the declines are particularly concentrated among low-performing students.

The dispiriting reading results for high school seniors — chiefly attributable to the poor performance of boys — follows on the heels of a similar downturn for fourth- and eighth-graders in the 2019 NAEP release. In an email, University of Virginia education professor Emily Solari said that the results mirrored those of earlier test iterations, though they can only offer a “snapshot” of reading achievement nationally.

“What this demonstrates is a system-wide failure to teach our children how to read and comprehend text,” Solari wrote.

NAEP has been administered nationally for over a half-century by the National Center on Education Statistics. Often referred to as “the Nation’s Report Card,” the test’s biennial release of reading and math results for elementary and middle school students is treated as a semi-annual progress report on the state of American schools.

The arrow largely pointed upwards during the 1990s and early 2000s, when students made impressive gains as the federal government led the implementation of new school accountability policies like the No Child Left Behind law. But for well over a decade, scores have been either stagnant or in retreat — including in tests of non-core subjects like geography and U.S. history, which were made public this spring.

As has increasingly been the case, the average decline in performance since 2015, when the exam was last administered to seniors, obscures the worrying larger drops for test-takers at the lower end of the scoring distribution. While the average score in each subject sank two points for twelfth-graders overall (and that reduction was only considered statistically significant in the case of reading), participants at the 10th percentile in math and reading scored three and five points lower, respectively, than similar students did in 2015.

Notably, while girls’ reading scores were significantly unchanged at all levels of performance, the average score for boys was three points lower than in 2015. Poorly performing students again accounted for most of that development as males at the 10th and 25th percentile scored six and five points lower, respectively, than four years prior, even as performance of higher-scoring boys went significantly unchanged.

Scott Norton, deputy executive director of programs at the Council of Chief State School Officers (CCSSO), said in a statement that the group was “concerned” about the new evidence that American students were falling behind in English.

“The results in 12th-grade reading, like those released last year for fourth and eighth graders, further underline the urgent need to improve literacy skills for all students,” Norton wrote. “It is particularly troubling that scores over the last two decades have dropped the most sharply for the lowest-performing students and students of color.”

One intriguing question arises from longer-term comparisons of student literacy, which seem to point to even worse backsliding. Relative to results from 1992, average twelfth-grade scores were seven points lower in 2019; scores for African American and Hispanic students at the 10th percentile were 24 and 17 points lower; and scores for male and female students were eight and five points lower, respectively. 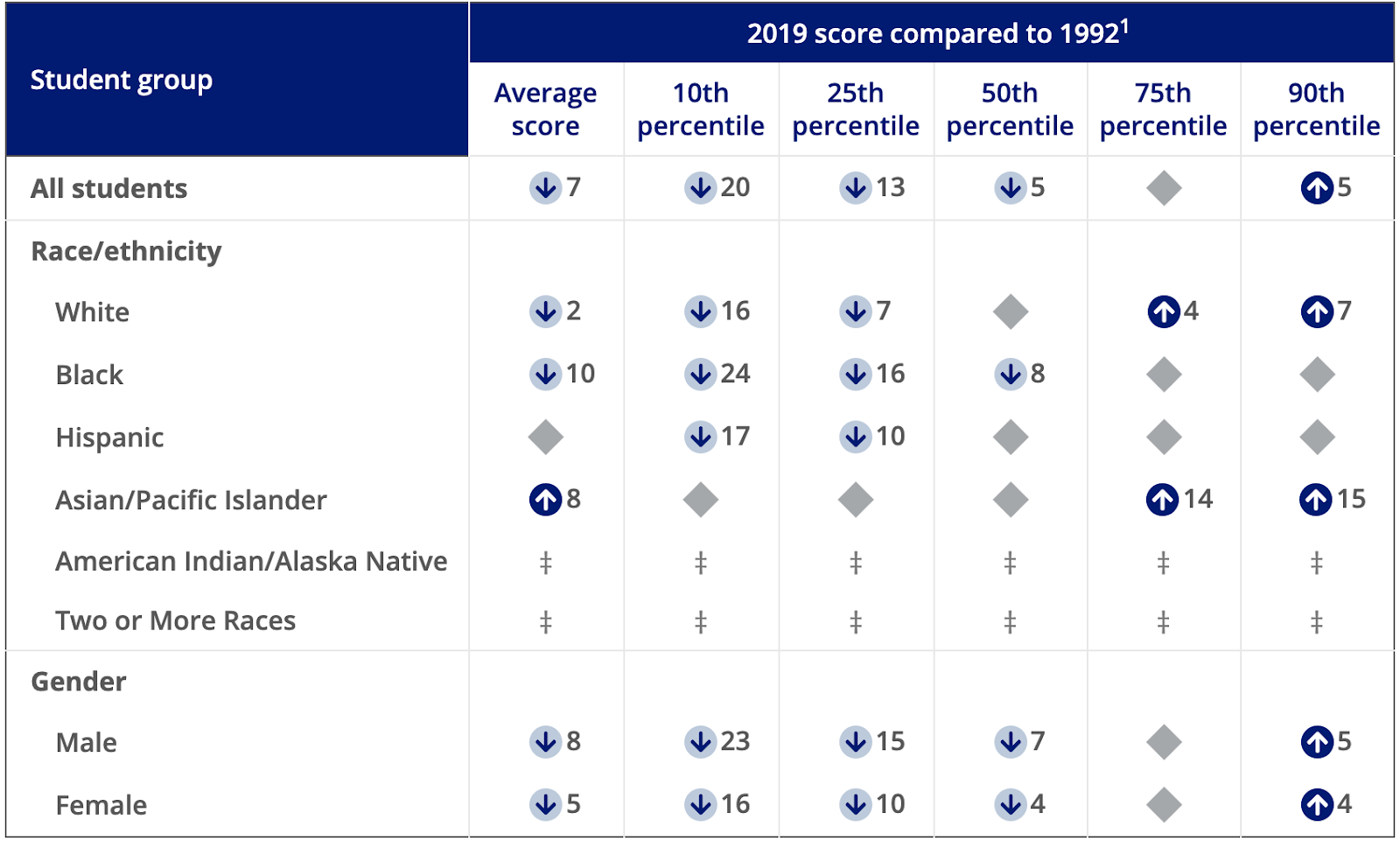 But as NCES Assistant Commissioner Peggy Carr told reporters Tuesday, those steep drops partially reflect another phenomenon at work in recent decades: the decreasing number of kids who drop out of high school before senior year. In years past, academically struggling students were much more likely to exit the school system, which meant that their reading difficulties were not measured in tests like NAEP.

Michael Petrilli, president of the reform-oriented Thomas B. Fordham Institute, further argued that the sagging scores could be the residue of policy. This group of high schoolers was still in elementary school earlier in the decade, when the financial shock of the Great Recession led school districts around the country to drastically cut spending on public education. Citing a wave of recent studies that have demonstrated the importance of funding in boosting academic outcomes, he said that recession-era contraction may now be felt in those students’ performance as they prepare to leave the K-12 system.

“Given our school systems’ proclivity to not make the best decisions when faced with the need to cut spending — they’re not that strategic, they tend to lay off the young teachers — I certainly buy the idea that a lot of school systems made cuts that were bad for achievement, especially for the poorest kids,” Petrilli said. “The timing works pretty well in terms of looking at the big declines in spending.”

Solari added that literacy instruction in the United States still does not incorporate much of what experts refer to as the “science of reading” — the body of research showing how kids acquire written language skills. The dispute over how to approach reading, which has divided K-12 teachers and academics alike, “transcends elementary, middle, and high school,” Solari said.

“Our education system is not equitable, and it impacts particular groups of students differentially. Further, despite having evidence of how to teach early reading to students, much of this evidence base is not making it into classrooms to inform the teaching practices that teachers implement every day. Children who struggle to learn to read in the early grades do not outgrow reading difficulties on their own.”

Happily, a few demographic groups — including white, Hispanic, multi-racial, and Asian/Pacific Island students — have significantly increased their average scores since 2005, during a time when dropout rates declined meaningfully. However, both males and females saw three-point drops relative to their performance in 2009, at the onset of the Great Recession. 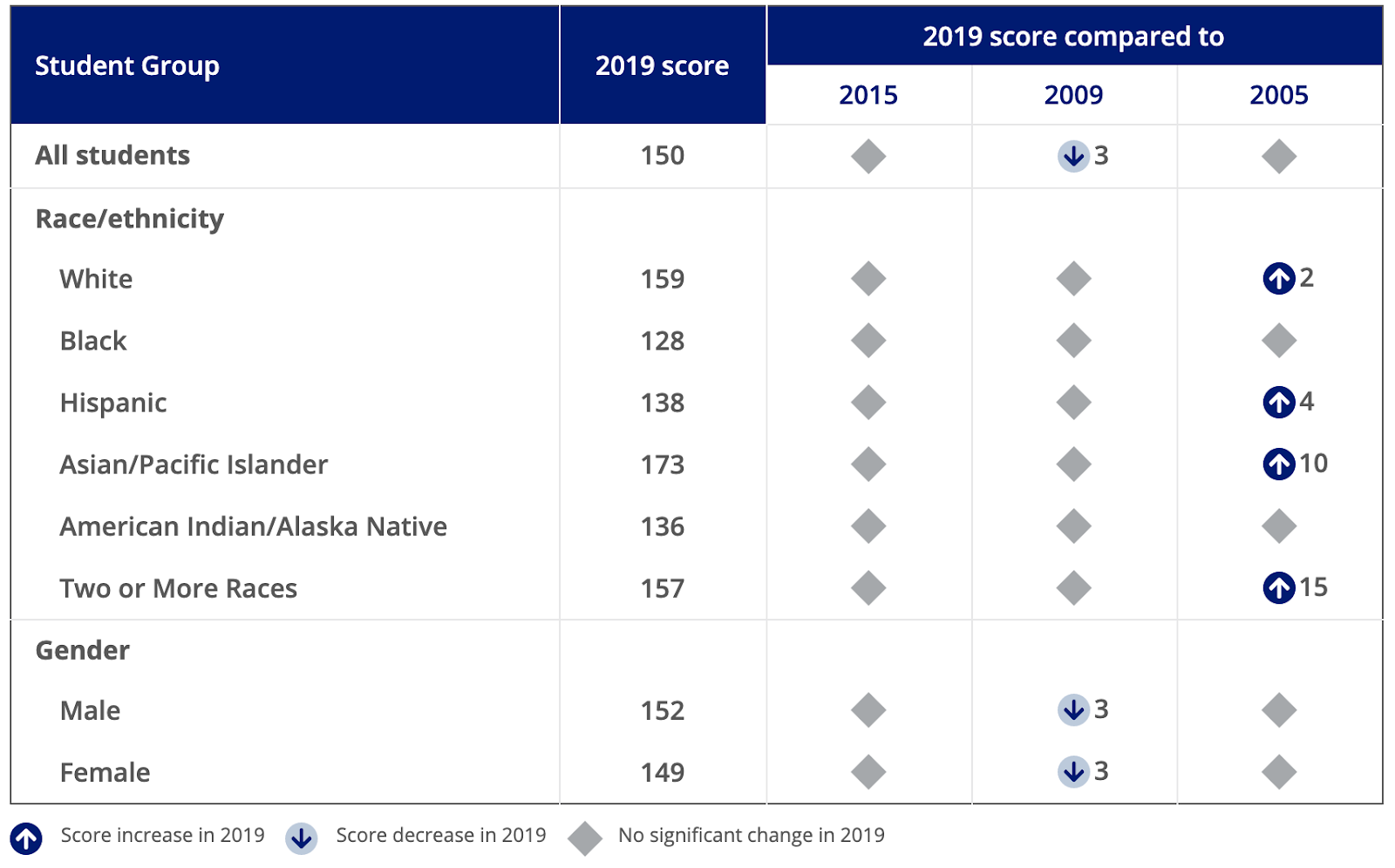 Trena Wilkerson, president of the National Council of Teachers of Mathematics, said in a statement that “no one should be pleased” to see the lack of upward movement since 2015.

“For students who are leaving high school when our democracy, economy, and personal safety all require more ability to understand, use, and apply math, holding steady is not success,” Wilkerson said. “We must also step back and see how our national policies are driving this generational stagnation in mathematics learning.”

In a puzzling development, the recent holding pattern in math occurs during a period when survey responses increasingly indicate that students are taking more challenging math courses, such as algebra and trigonometry. On the media call, Carr told reporters that it’s difficult to determine exactly what high schoolers are learning in the classroom — both because classes are often billed as being more challenging than they truly are, and because students may be exaggerating their participation in high-level courses.

“Students often over-report participation in courses at the higher level,” she said. “They say they are taking higher-level courses when the transcripts say they are not.”