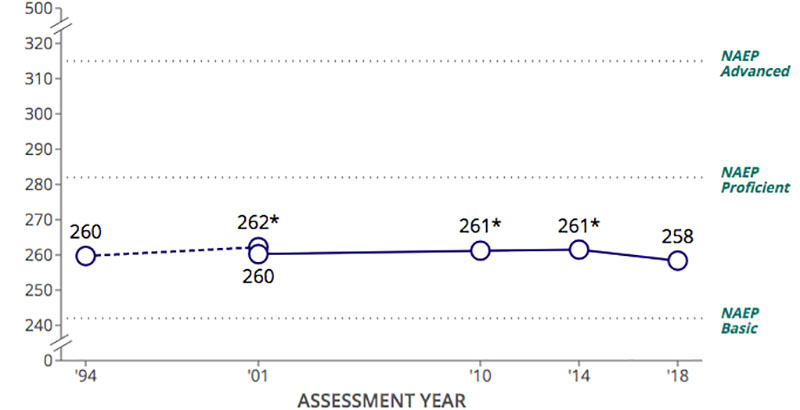 American education observers have gotten used to receiving bad news from the National Assessment of Educational Progress. They received a little more last month, as eighth-graders posted lower scores in geography, civics and U.S. history in the 2018 NAEP than they did four years prior.

Referred to as “the nation’s report card,” NAEP is the preeminent national exam for K-12 students, releasing semi-regular scores for fourth-, eighth- and 12th-graders in a range of academic disciplines. After a prolonged period of growth during the early years of the 21st century, scores in the core academic subjects of math and English have either stagnated or declined in repeated rounds of testing, with low-performing students losing ground the fastest.

The social studies subjects have been tested less frequently, and their results have attended far less publicity; in general, trends on all three subjects have been modestly positive, with eighth-graders generally making small gains or holding steady through 2014, the last iteration of testing.

That changed when the 2018 numbers were published on April 23. Even with the state of American public schools thrown into chaos by the COVID pandemic, education journalists noted declines of four points in U.S. history and three points in geography (both registering as statistically significant, meaning that they are large enough to not have resulted from sampling bias) and a dip of one point in civics. Several news accounts even revived the perennial favorite headline, noting that U.S. students “don’t know much about history.”

Secretary of Education Betsy DeVos was no less alarmed, releasing a statement that called the results “stark and inexcusable”:

“A quarter or more of America’s 8th graders are what NAEP defines as ‘below basic’ in U.S. history, civics and geography. In the real world, this means students don’t know what the Lincoln-Douglas debates were about, nor can they discuss the significance of the Bill of Rights, or point out basic locations on a map.”

Several subject-matter experts were particularly concerned. In an email, University of Tennessee geography professor Derek Alderman told The 74 that America students’ lack of knowledge of “place, the past and politics” would hamper their success both in the labor market and as citizens.

“The NAEP scores are concerning given that we are in an age in which job readiness and global competitiveness [are] critically connected to humanities and social science education, critical thinking and writing, and thinking about the world as a web of interdependent connections.

If we do not correct this downturn in geography, history and civics, we run the grave risk of our citizens being unable to recognize and challenge today’s growing flows of political misinformation, geographic stereotypes and historical myths.” 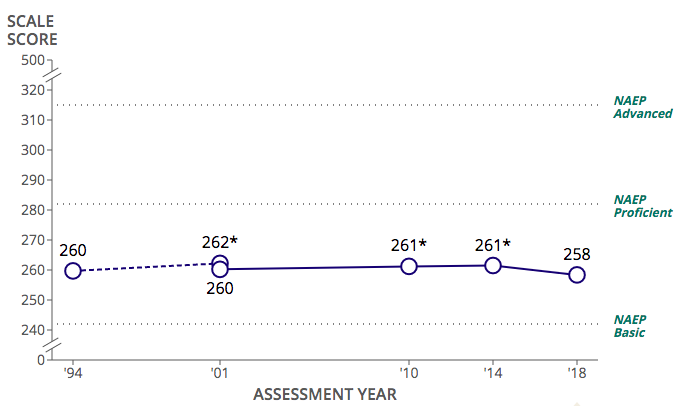 But while experts agree on NAEP’s importance as a barometer for general subject learning, not all are convinced that this year’s disappointing results represent a major step back for achievement.

Peter Levine is one of the nation’s foremost experts on civics education. A prolific chronicler of public affairs and citizenship at Tufts University, he co-founded the Center for Information and Research on Civic Learning and Engagement (CIRCLE), an influential clearinghouse of civics-related scholarship. And in recent years, he has issued grave warnings about America’s civic health as faith in government and the democratic system has waned, even among K-12 students.

But in a blog post published in response to the NAEP scores, he advocated that concerned educators keep the results in proportion, noting bluntly that “the headlines are hyped.”

As one of the original designers of the NAEP civics exam, Levine called the change in scores “subtle” and reminded readers that the test sets a bar for proficiency higher than virtually every state exam. Finally, given that the questions are administered in a written exam, scores are invariably tied with eighth-grade literacy in a way that may fail to capture students’ full range of civic engagement.

“The data show evidence of stability in the relatively narrow set of outcomes that the Assessment measures, with the caveat that the test is designed to be stable over time,” he wrote.

Stanford University education professor Sam Wineburg, founder and executive director of the Stanford History Education Group, made an appeal to posterity on social media, noting in a Twitter thread that hysteria over students’ supposed historical ignorance is a tradition with a lengthy history of its own. Indeed, worried media accounts on the subject date back at least to the time of World War I.

Before you don sackcloth and ashes over the latest NAEP history results, take a deep breath. pic.twitter.com/zsDXuQqw92

Laura Hamilton, a distinguished chair in learning and assessment at the RAND Corporation, agreed with Levine that contrary to some accounts, the declines in scores across the three subjects “are not dramatic.” Still, she said, the fact that a sizable portion of students scored above the “proficient” benchmark — at least 15 percent for all three subjects — demonstrated that the scoring mechanism was “not completely arbitrary” and that the majority of students could also perform at that level if provided with sufficient academic assistance.

[NAEP] “is an important data point that we’re receiving at a time when the need for youth to understand concepts such as their rights and responsibilities as Americans is clear.”

Some fret that the data collected by the exam will soon become narrower and less frequent. Last year, the National Assessment Governing Board — the federal agency that administers NAEP — announced a 10-year plan to cut future costs by testing 2,000 fewer schools and cutting tests in geography, among other subjects. At present, geography isn’t scheduled to be tested again through 2029.

Michael Solem, co-director of the National Center for Research in Geography Education, struck the most dire note. Eighth-graders experienced a three-point drop in geography from the 2014 results, with overall scores ranking as low as they have since 2001. Worse still, in one of the four geographical content areas measured on the exam, Environment and Society, scores had dropped in every round of assessment going back to 1994.

The study of environmental geography, Solem noted, encompasses questions of “how people depend on, adapt to, are affected by and modify the natural environment” — a richly topical field of inquiry, given the present circumstances. The deflating trend suggested that students wouldn’t be able to make critical judgments of current events affecting every school in the country, including the coronavirus outbreak.

“This is a deeply worrisome signal that students are not learning environmental geography topics, concepts and processes at a level of proficiency that is important for understanding the nature of geographical problems from natural hazards and climate change to pandemics such as COVID-19.”