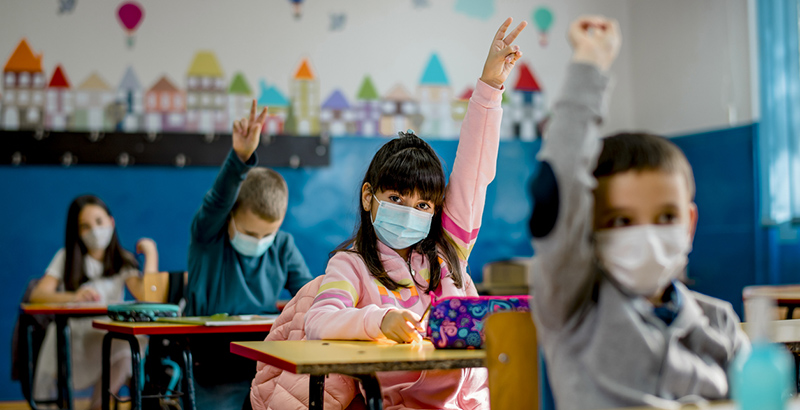 For the first time this year, over 60 percent of K-12 students are now attending schools that offer daily, in-person classes, according to a recent update. Only 9 percent go to remote-only schools, down from 12 percent last week.

But even as more and more students return to classrooms, attendance remains a barrier amid fears of COVID-19 safety and more infectious variants. Recently released data from the Institute of Education Sciences show that Black and Indigenous students — who are more likely to go to underfunded schools with fewer resources for pandemic safety measures — have seen absenteeism rates above 10 percent.

Now, as schools mull how to catch up students who have fallen behind, many districts are looking toward the summer to support their young people’s continued learning,

Here’s what you need to know about the state of play on school reopenings across the nation, powered by data from the school calendar tracking website Burbio.

The number of students whose schools offer full-time, in-person learning nudged above 60 percent this week, with only 9 percent attending virtual-only schools.

For youngsters, the rate of in-person learning was even higher. Nearly 70 percent of elementary schoolers have the option to attend traditional, five-days-a-week classrooms. Only 6 percent go to schools that only offer remote learning.

These figures represent a continued trend toward fully reopened classrooms, in line with an executive order President Joe Biden issued on his first full day in office. 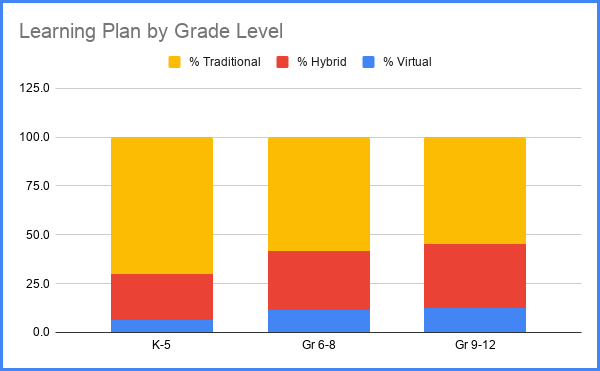 Over 60 percent of all students attend schools that offer full-time, in-person learning. Rates are highest among younger learners. (Burbio)

Long one of the states most hesitant to reopen classrooms, a number of California districts announced plans to bring students back for in-person learning next fall. Leaders in Oakland, Fremont and San Francisco all indicated that students would have the option to return to full-time, in-person learning for the 2021-22 school year.

However, the Burbio team noted in their update that the messages from Golden State school officials included a level of qualifying language “unique” to California. Many stipulated that their plans hinge on developments in spread of the COVID-19 virus and could be limited by 3 foot distancing policies specified by the Centers for Disease Control and Prevention.

Though the CDC relaxed its guidelines for social distancing in classrooms, reducing the magic number from 6 feet to 3, recommendations still specify that where levels of community COVID-19 spread top 100 cases per every 100,000 people in a week, the original 6 foot benchmark should go back into effect.

New guidance in New York follows those rules. As a result, schools in Warwick Valley, NY are moving middle and high school students from traditional to hybrid learning. Leaders in Port Washington and Monroe-Woodbury had to put plans to return older students to classrooms on hold.

North Carolina’s state legislature passed a bill requiring six weeks of summer school for students who have fallen behind during the pandemic, with bonuses for teachers who participate. Florida has also moved to expand summer learning opportunities, along with large urban districts such as Philadelphia and New York City.

Taking a slightly different approach, East St. Louis has extended its school year by five weeks, with mandatory attendance for all but select groups of students. East Baton Rouge is tacking time onto the other end of the year, with plans to start next fall eight school days early.

Amid growing concern that many parents will not choose to return their children to in-person classes even if schools reopen next fall, Iowa and Minnesota have launched statewide virtual learning academies for the 2021-22 school year.

In other locales, details on next year’s remote offerings are still coming into focus. Chesterfield County, Virginia and Bibb County, Georgia both have plans for county-wide virtual learning options.

As remote instruction seems poised to become a long-term mainstay of public education, so too do debates over student privacy. While proponents see a huge upside to “teacher cams” that let students tune into class from anywhere with a Wi-Fi signal, critics worry that cameras could pose a risk to students — and in some cases even violate the constitution.

Minneapolis Teacher Strike Lasted 3 Weeks. The Fallout Will Be Felt for Years