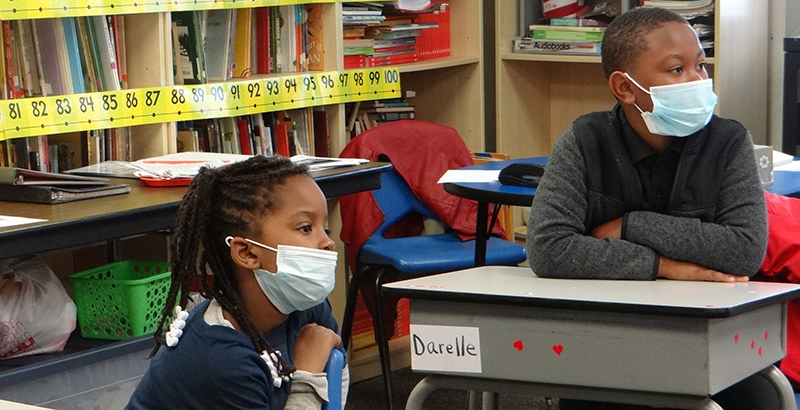 Students at the East Academy charter school have been in classrooms all year, an option parents are glad the school offered. (Patrick O’Donnell)

Staff at St. Stanislaus elementary school in Cleveland have spent the school year constantly reminding students to keep masks up over noses, to keep safe distance, and sanitizing everything, including the Easter eggs given to the youngest students.

They even had students do the “monster walk” – walking between rooms with arms stretched out in front of them to create social distance, and placed jugs of water in classrooms instead of water fountains.

The stringent precautions have paid off.

The school of 200 students in Slavic Village, one of Cleveland’s poorest neighborhoods, pushed aside fear and opened its classrooms and have kept them open all year, despite almost every other school in the city offering only remote classes as the local health department was urging.

About two thirds of the high-poverty, high-minority students at St. Stanislaus are coming to school every day.

“Our guardian angel has really strong antibacterial on her wings,” she joked. “That’s what we decided.” 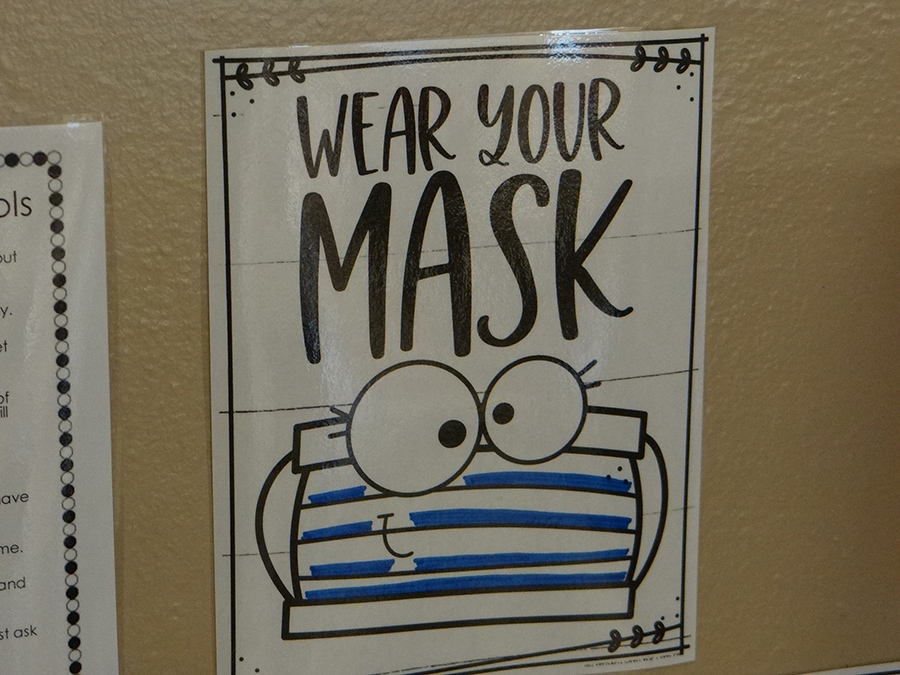 As politicians and researchers debated for months whether schools could be safe during the pandemic, St. Stanislaus and a few other Cleveland schools bucked the trend of keeping doors closed and offering only remote classes.

The 74 visited St. Stanislaus and one other school, the East Academy charter school, in August when both schools were outliers both nationally and in Cleveland as they opened and made themselves the first canaries in the COVID coal mine.

Today, with the school year in its final stretch, parents and officials at both schools say using common and well-known safety precautions let them do more for students and families, all with little damage from COVID.

“I think East is a good representation of, if you follow the guidelines given to us by the CDC and the governor and all the sources, that you can open and run a school successfully during this time,” said Principal Paul Cowan.

Two students and two staff contracted COVID all year, according to state data, though East Academy officials say there was only one of each since November. Parents are increasingly comfortable having kids at school so the percentage of East Academy’s nearly 300 students taking classes in-person has risen from 38 percent in August to 60 percent today.

Cleveland school district schools have just reopened in the last few weeks — but with no full in-person option — while schools across Ohio and nationally are opening their doors again.

More than 90 percent of students at both schools are Black and both have 60 percent or more students picking the in-person option. (Others remain remote or hybrid.) That’s more than double the 28 percent of Black students nationally enrolled in in-person classes, according to the first federal survey of school districts across the country released last month.

Martin said she felt the school had little choice but to open the school.

“We have to have our mission forefront in our mind and that is taking care of children.” she said. “At-home education isn’t right for all of them.”

Since St. Stanislaus is a private school and not unionized, Martin was able to insist that teachers all return in the fall. All agreed, she said.

“It’s not like we weren’t without concerns in August,” she said. “You just do it. You rip off the Band-Aid and you just do it.” 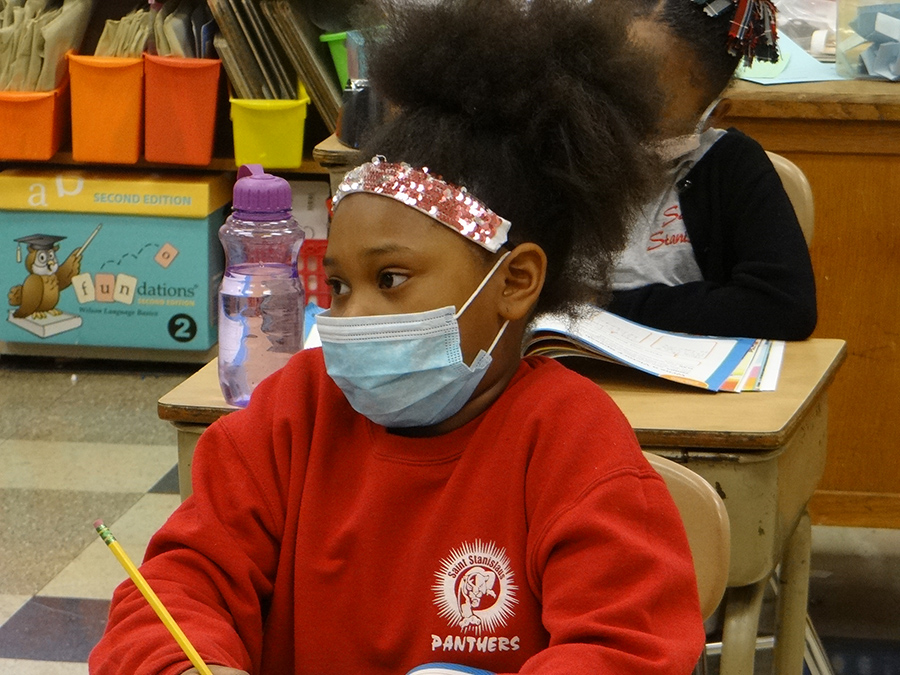 St. Stanislaus students and staff have been diligent about wearing masks in class all year. (Patrick O’Donnell)

Along with requiring masks and keeping students at a distance, almost always sitting at separate desks or tables in class, the school solved ventilation worries the same way it has always handled rooms overheating from a 1906 boiler — opening windows, even in January and February.

The school is debating whether to buy classroom air filters for next school year. Masks will remain and water jugs in rooms have become what Martin calls “COVID keepers” — practices that will remain into the future.

Parents said they appreciated the efforts and communication.

“I trust Ms. Martin’s judgment,” said father Vino Long, who was glad his third and fifth grade daughters could be in class, rather than online, where they would easily grow bored.

Sherene Harrow has her third grade daughter attending St. Stanislaus in-person, which makes it easier for her while she works as a home health aide while also helping her daughter learn more. Safety was a concern, at first.

“I took my time to visit the classroom and look around,” she said. “I’m not saying we shouldn’t be cautious about the virus, but I was OK with the work they’re doing there.”

East Academy’s Cowan said many families at his school also needed a place for children during the day while they work.

Over time, he said, parents and students could struggle with online work and decide to try in-person, sometimes touring the school to see safety measures for themselves.

“They weren’t as scared of it so they started sending kids back,” he said. As more students returned to in-person classes, the school opened more classrooms, shifted teachers from remote lessons to in-person ones and has taken advantage of the CDC relaxing distancing standards to three feet. Students can have their own desks but share tables as they sit in some classes more often now.

Students at East Academy have been able to sit closer to each other as CDC recommendations have relaxed and as more students return to in-person classes. (Patrick O’Donnell)

Sharne Hawkin had no trouble sending her third and fourth grade sons to in-person classes last month, after being online most of the year, when she landed a job at a nursing home. She was satisfied with safety precautions and how the school constantly enforced its mask rules.

“They’re pretty strict about that,” she said.

Other parents said they had concerns about safety, but trusted school staff and thought their children were better off in classrooms.

“My baby is a baby,” said Nicole Patrick, mother of a second grader at East. “He needs that in-class learning. He needs that hands-on learning to stimulate his brain, not sitting in front of his laptop, which is the same in his brain as playing a game on his cell phone. It’s not stimulating.”

While she had safety worries, she said the risk is worth it.

“We’ve got to get back to living our lives,” she said. “This is going to stay around, like other diseases that stay around. We’ve just got to do our part to stay safe.”