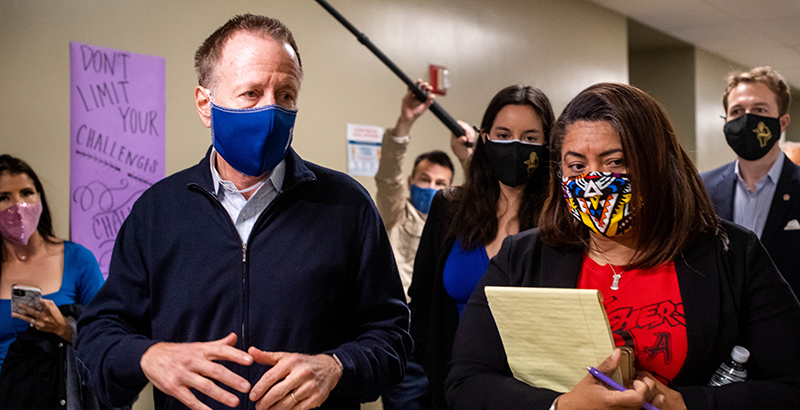 As the Los Angeles Unified School District prepares to reopen elementary schools for the first time in 13 months, recently released court documents show that while the district pushed for more instructional time for students earlier this year, the union successfully bargained for a reduced teacher workday — and a lot more of what it wanted.

On July 16, Tony Digrazia, director of labor relations for the district, told union leaders, “We see a need for live video, need a defined school day, and would like to see the workday mirror or parallel a regular workday.” He added that the district “can’t shortchange the students.”

On Aug. 1, 2020, the district sent the union a draft of a side letter saying teachers “shall” work six hours a day. Later that day, the union sent it back with the line crossed out, pushing for an average of six hours. (Parent Revolution)

Under the existing collective bargaining agreement, teachers typically worked an eight-hour day, with two of those “off-site” — for example, grading papers at home. The union, however, wanted the entire workday last fall to last no more than six hours and rejected a stipulation that teachers make themselves available to parents during out-of-class time.

“I don’t think it’s reasonable for us to write language, that you need to make yourself available,” Gloria Martinez, vice president of United Teachers Los Angeles, said during a July 31 Zoom session, according to a transcript of the meeting. “Our teachers have been making themselves available 18-20 hours a day. … It’s a little bit insulting to assume we will not do what is best.”

Ultimately, the district agreed to a six-hour workday, on average, with one hour and 15 minutes of that time to be used “at the discretion of the teacher.”

The district wanted teachers to use the time they weren’t teaching to respond to students’ needs. The union was successful in getting language that teachers could decide how to use that time. (Parent Revolution)

Transcripts of the negotiations provide a rare glimpse into district-union dealmaking during the most tumultuous school year in recent history. The discussions and email exchanges that took place between July and December were turned over as part of a lawsuit brought by a group of parents against the district and the union. Affiliated with Parent Revolution, an advocacy group, and Innovate Public Schools, a nonprofit, the plaintiffs argue that a series of “side letter” agreements made since the beginning of the pandemic violate the state’s guarantee of a basic public education. Side letters are agreements between the district and the union that occur outside of their existing contract.

The district “wanted something very different, and when they lost, he just went out and sold the loss to the public,” Litt said. “Families in the public are saying, ‘Who is making these decisions?’”

With 30,000 teachers in the district, the two hours less per day adds up to 10,800,000 “teacher hours that could have been used in some way — teaching, training, planning, calling students,” he said.

Some observers are linking lost instruction time to a drop-off in academic performance during the pandemic. Analyses of national assessment data show that students in the elementary grades, especially English learners and those from low-income families, have made far less progress in reading and math than they would have in a normal school year. A recent report showed 20 percent fewer kindergartners are on track to learn to read, compared to this time last year.

No ‘mandate to be aggressive’

The L.A. dynamic contrasts with that of the nation’s two other largest school districts. In Chicago, for example, the mayor and superintendent took a stand against the Chicago Teachers Association that almost led to a strike. The union agreed to a K-8 reopening plan earlier this month, but some disagreements continue over bringing high school students back. And last week, New York City schools Chancellor Meisha Porter and United Federation of Teachers President Michael Mulgrew joined Education Secretary Miguel Cardona at a reopening summit to talk about their collaboration. The relationship is less cordial in Los Angeles, where schools remain closed, and Cecily Myart-Cruz, president of the union, has criticized Gov. Gavin Newsom for using funding incentives to accelerate reopening.

The district and the union declined to comment on the transcripts, but Nick Melvoin, a Los Angeles Unified board member, said many of the families demanding that schools reopen were the same ones who walked the picket lines with teachers who went on strike for six days in early 2019. Beutner, he said, didn’t necessarily think he had “a mandate to be aggressive” and that the district’s relationship with the union, now two years later, is “still a strained one.”

Referring to the Chicago union’s threat not to return to classrooms, Melvoin said Beutner “didn’t think the disruption of opening schools and not having teachers show up was in the best interest of students.”

The Chicago and New York districts, unlike Los Angeles, are under mayoral control. In those cities, “You’ve got a leader that directly represents constituents,” said Bradley Marianno, an assistant education professor at the University of Nevada Las Vegas. “There is a lot more public pressure on the elected leader.”.

Marianno recently analyzed the influence of unions on reopening decisions this year. He found that COVID-19 hospitalization rates had no impact on reopening, but that support for former President Donald Trump or  collective bargaining were both more significant predictors of district decision-making.

“It’s all about partisanship and union strength in these reopening conversations,” he said.

The larger political context matters, said Paul Hill, a professor at the University of Washington and founder of the Center on Reinventing Public Education. The Chicago Teachers Union, he said, is likely as confident as the Los Angeles union because of its strong position following its 2012 strike against former Mayor Rahm Emanuel.

And in New York, the UFT “has been able to stay out of the way while [Mayor Bill de Blasio] and [Gov. Andrew Cuomo] sniped at each other on school opening,” Hill said. “I’m betting they get more aggressive as Cuomo and de Blasio both become lamer ducks. My bottom line is that the three unions are not that different, but their day-to-day tactics are affected by larger political events.”

‘Don’t want to lose our parents’

Not surprisingly, the topic of parents came up frequently in negotiations, transcripts show.

On July 23, Digrazia said, “We got beat up pretty good by parents” over “teachers getting full pay and not putting in [a] full day.” He was referring to an April side letter that reduced the teacher workday to four hours last spring once schools closed.

Alison Yoshimoto-Towery, the district’s chief academic officer, noted concerns about not wanting to “grow a generation of nonreaders” and said parents were petitioning for improvements in distance learning. “Don’t want to lose our parents,” she said.

But Jeff Good, the union’s executive director, encouraged the district to defend teachers instead.

“When people push back about March, April, the best approach from the district is to say our teachers were heroic, and they were trying to triage,” he said.

On July 24, Good called the district’s multiple references to parents “annoying.” Other leaders suggested that parent opposition was largely coming from wealthier families.

Julie Van Winkle, the union’s secondary vice president, said complaints over lack of instructional time stemmed from “parents with computers.” Grace Regullano, who handles research for the union, said “lower-income [parents] said they are satisfied” and that “people with an agenda” were the ones talking about last spring’s distance learning agreement.

Those comments bothered Vicenta Martinez, who has a second grader in the district and is one of the plaintiffs in the lawsuit.

“They mentioned that we are privileged, that we are affluent,” she said. “That really caught my attention. I worked at a recycling center. Even at home, I didn’t have a computer.” Martinez is now unemployed. 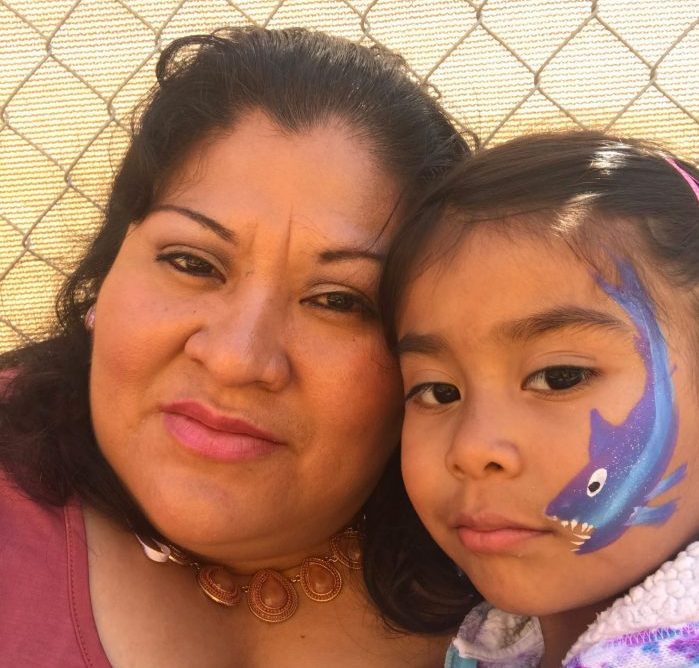 The district wanted teachers to work from their classrooms so they could have access to whiteboards and other displays. Because students wouldn’t be in the room, Digrazia said on July 23 that he didn’t see the move “as a health, safety concern,” according to transcripts

But Good was unconvinced.

At the time, Los Angeles was seeing a midsummer surge in cases, scientists had detected a new variant of the disease in southern California and Newsom was tightening restrictions on indoor activities.

“This is a big curve ball to drop in our lap. We [are] not convinced of the [efficacy] of teachers going into campus. Probably a hair away from going into some stay-in-place order. Without any clear pedagogical value to send out teachers.”

In July, the district also wanted to get a jump on developing a hybrid plan even if COVID-19 transmission rates were still too high for students to return right away. But Arlene Inouye, the union’s treasurer said, “Hard to hear about hybrid without hearing about health and safety; it is going to create a problem.” Ultimately, Good submitted a proposal without any reference to a hybrid schedule.

In a March 22 district survey of families, only about a third came out in favor of in-person learning. Those most likely to stay remote live in Black and Hispanic communities hardest hit by COVID-19, while families in less-impacted areas plan to return to schools at twice the rate — a pattern seen in other large cities across the country. Some parents who aren’t ready to come back include teachers with children in the district. 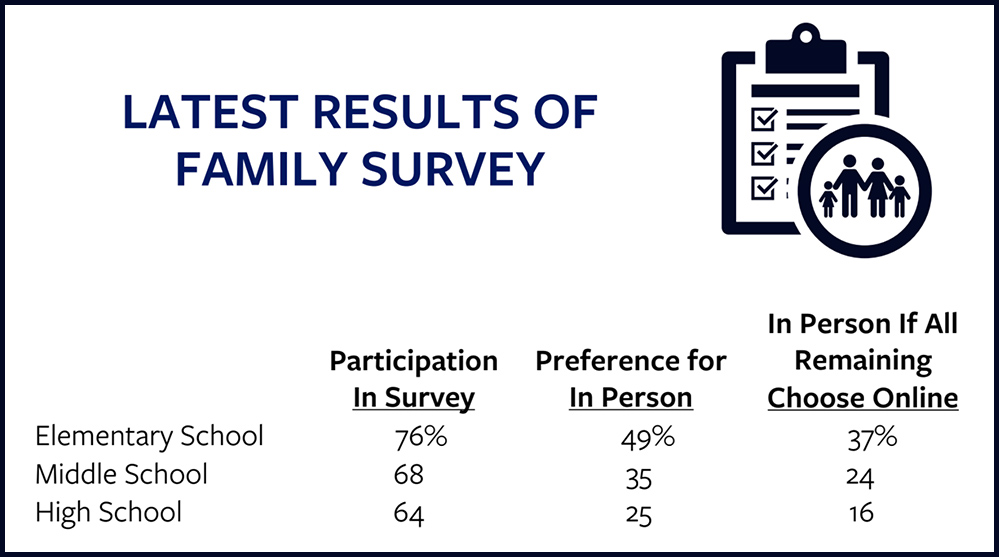 To Litt, the hybrid agreement continues to cheat elementary students out of a full school day. Daily instruction — both in person and remote — will be cut down to three hours, either in the morning or afternoon. Middle and high school students returning to school will only have “Zoom in a room” because the latest side letter prohibits teachers from simultaneously teaching remote and in-person groups. By contrast, teachers in nearby Long Beach Unified will provide face-to-face instruction to students in those grades.

In a district with the most charter schools in the nation, Yoshimoto-Towery’s concern that more families will leave Los Angeles Unified is not unfounded, Marianno said. Like others across the country, the district has seen sharp enrollment declines, dipping below 600,000 students last year.

He added that the strike in Los Angeles — part of a teacher labor movement that began with a statewide walkout in West Virginia in early 2018 — was about adequate funding for schools. Those who marched with Los Angeles teachers have different concerns now.