The Students We Met at the March For Our Lives: Video, Photos, Testimonials From Kids Who Marched In (and Beyond) Washington, D.C. 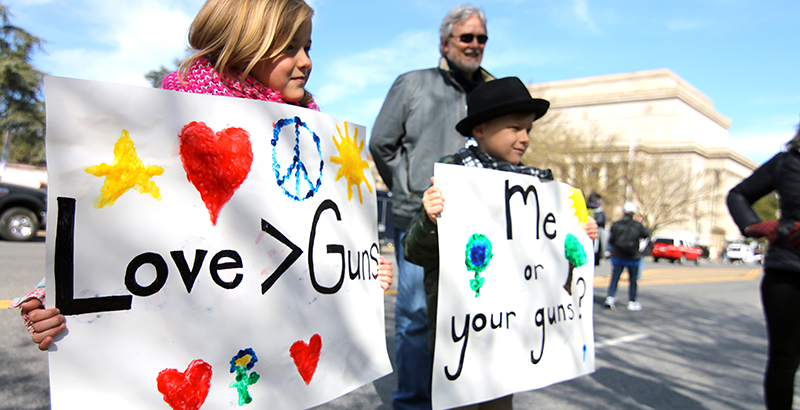 Virginia students Audrey and Reece Brown hold up their handmade signs during the March for Lives rally in Washington on Saturday, March 24, 2018. (Photo credit: Lucinda Shen)

In one of the largest demonstrations since the Vietnam era, an estimated 800,000 people rallied in the March for Our Lives in Washington, D.C., on Saturday. That number doesn’t include the million students who participated in hundreds of other marches across the country.

Chief among the activists in the nation’s capital: students, parents, and educators. The 74 spoke with dozens of these students, many of whom traveled hours to get to Washington. We also took note of the most memorable social media posts from students in other cities, taking to the streets for their cause.

Here’s how our team covered the march:

Inside the Hashtag — 51 Memorable Tweets

Beyond the millions marching Saturday, millions more were watching the action unfold on their phones via livestream and hashtag. Laura Fay has scanned through some of the most memorable and unforgettable images from Saturday’s gatherings; here’s her roundup of what made the day so special on social media.

In one of the largest demonstrations since Vietnam, protesters led by survivors of the Parkland, Florida, school shooting flooded Washington, D.C., to demand action to end gun violence. With tears, signs, and resolve, the students issued a call to action echoed in more than 800 sister demonstrations around the globe. The 74’s Emmeline Zhao joined the march and came back with this report about the scope of the spectacle, and the students she met along the way.

WATCH — The Students We Met Marching for Their Lives

We took our video camera to Saturday’s march in Washington and asked an array of students and parents why they thought it was so important to travel hours to join their fellow citizens in the nation’s capital. As produced by Lucinda Shen and Emmeline Zhao, and edited by James Fields, the compilation offers a revealing glimpse into the thoughts, passions, and priorities that are guiding so many of the students who marched over the weekend — and who may march again during walkouts planned for April 20.

Protest Portraits: A Photo Tour Through the D.C. March

We spent the day in Washington, D.C., on Saturday. Here are two dozen of the more notable images from the protests that overtook the city.

Video — One-on-One With 14 Students Who Traveled to D.C.

From California to Kentucky, students traveled for many miles this weekend to join their peers in protesting gun violence. We took a moment to chat one-on-one with 14 of the demonstrators about why they traveled so far to march for this cause in the nation’s capital. Here are our conversations along the protest route.

Millions marched over the weekend, and at the head of the movement are teenagers — school shooting survivors, activists, and budding media personalities. But if these students can face off against U.S. senators and the National Rifle Association, why can’t they vote?

It’s a question that has gained the attention of both voting rights activists and media commentators, and the push to lower the voting age to 16 (or even lower) is gaining wider acceptance as part of a broader voting rights agenda. As Kevin Mahnken reports, proponents say that extending suffrage to younger teenagers could make them lifelong voters and improve civic engagement, while skeptics argue that 16- and 17-year olds simply aren’t mature enough for the ballot. But is there really a meaningful distinction between voting and other forms of democratic involvement, all of which young people are encouraged to participate in?

Just days after a gunman killed 17 people at Marjory Stoneman Douglas High School in Parkland, Florida, student survivor Emma Gonzalez offered a promise — someday, their story would appear in textbooks. With the power of their voices, student activists — thousands of whom march out of class earlier this month and led March for Our Lives protests Saturday — could help change America’s gun laws.

And while some have dismissed the voices of outspoken students following the deadly shooting, Mark Keierleber writes that outspoken youth have long helped drive debates about social issues in America. Mary Beth Tinker, whose own protest led the Supreme Court to define students’ free-speech rights, told The 74 the latest round of nonviolent student protests has the feeling of a “turning point” in the gun debate. “I was telling some kids, ‘When the kids marched in Birmingham in 1963, Martin Luther King Jr. called it a turning point in the civil rights movement,’ and I think this is another turning point now,” she said.