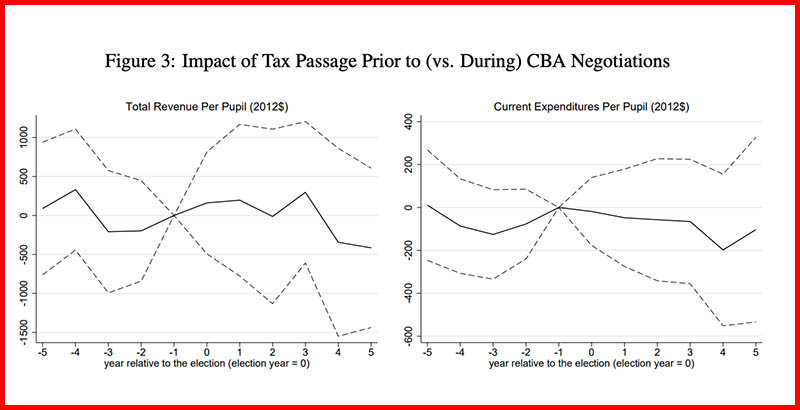 Experts have spent decades studying the question of how teacher’s unions influence both the resources provided to schools and the learning that occurs inside them. The events of the last decade — one that began with a clampdown on collective bargaining in Wisconsin, crested in a historic wave of labor militancy, and culminated in the debate over COVID reopenings — have only magnified focus on the issue.

Now, new research has emerged examining whether unions make for stronger schools. In a working paper released last fall, Ohio State University professor Stephane Lavertu and University of Utah professor Jason Cook examined how hundreds of Ohio school districts spent new revenues generated through local tax referendums. Those that allocated the money while engaged in collective bargaining negotiations with teachers unions were more likely to raise salaries and benefits, they found, while those under no comparable pressure from unions were more likely to hire new teachers — realizing significant student achievement gains in the bargain.

Lavertu, whose paper has not yet undergone peer review, said that he was impressed to see the divergence in student performance between districts in various bargaining circumstances. Those under less pressure from union demands, he and his co-author found, saw meaningful academic benefits from spending just $200 more annually per pupil.

Those findings represent some of the latest evidence linking the work of unions with the outcomes of students. Researchers have struggled for decades to uncover the ways in which organizing activity — everything from labor pacts to teacher walkouts to political lobbying — influences how schools behave, with most concluding that it tends to push for higher expenditures aimed at improving working conditions. Now they’re working to identify how those activities, often referred to by economists as “rent-seeking,” actually affect what’s going on in the classroom.

Bradley Marianno, an education professor at the University of Nevada, Las Vegas, co-authored a study published in February finding that stronger collective bargaining agreements are associated with higher levels of school spending and higher salaries for teachers and administrators, but not with student achievement. In an interview with The 74, he said that advances in research over the last few years have made it easier to study the relationship between union activities and education “production.”

“Unions seek to maximize the gains of their membership,” Marianno said. “That’s their role, they get paid to do that, and they survive to the extent that they do it well. Where the rent-seeking comes in is with this long-standing debate about whether those actions to maximize gains for teachers actually lead to requisite changes in some type of student outcome, the productivity of the education system.”

The effects of ‘rent-seeking’

In organizing their study, Lavertu and Cook took advantage of the consistency of Ohio’s teacher contract negotiations. Districts tend to renegotiate their collective bargaining agreements every three years, with roughly one-third of the state’s districts entering a renegotiation cycle each summer.

But that regularity interacts somewhat unpredictably with another crucial phenomenon: the timing of local tax referendums, which produce new school revenues. Because the two events aren’t synchronized, some districts begin negotiating with their teachers unions shortly after they have raised significant funding for education, while others have already spent that money by the time they reach the bargaining table.

Analyzing nearly 1,500 elections across the state, the researchers found that in districts whose bargaining agreements expired just after a tax referendum passed — and where unions would therefore have a stronger hand in negotiating new agreements — more revenue was directed toward compensation for existing employees. In those districts, teacher salaries at the top of the pay scale increased by as much as $1,000, a greater portion of district revenue was directed toward teacher benefits, and financial reserves declined somewhat.

By contrast, in districts that passed referendums and allocated school funding long before their teacher contracts expired, salaries did not rise by nearly as much. Instead, they hired an average of 12 new teachers in the first year after elections.

Those differences in spending choices, along with the somewhat better academic results for districts whose decisions about budgeting and bargaining were less connected, presents compelling evidence not just of rent-seeking in action, but also of how it trickles down into classrooms. Marianno’s paper, co-authored with Katharine Strunk of Michigan State University and Paul Bruno of the University of Illinois at Urbana-Champaign offers more: In a study of collective bargaining agreements in hundreds of California school districts, the trio found that stronger agreements (i.e., those that place more restrictions on administrators’ influence over school management) were associated with higher spending on instruction and school salaries, but no achievement gains.

“That question, in my mind, is pretty settled: Unions do, empirically, influence expenditures in meaningful ways,” said Marianno. “But what about student outcomes? I would say that…most of the literature suggests that those gains in expenditures are not associated with improvements in student achievement.”

That finding isn’t universally held, however; another study, published last year, concluded the opposite.

To study unions’ impact on both funding distribution and education quality, the University of Connecticut’s Eric Brunner and Amherst College’s Joshua Hyman looked at the results of school finance reforms across the country between the 1990-91 and 2011-12 school years. During that period, dozens of state legislatures dramatically changed their school funding formulas in order to remedy long-running inequalities between rich and poor districts.

In states with the strongest unions — typically those in the Northeast, Midwest, and Pacific coast regions — the money sent by lawmakers found its way into classrooms, in the form of salaries and other instructional costs, on an almost dollar-for-dollar basis. In states with weaker unions, usually found in the South, only about 10 cents of every new dollar boosted education revenues; the rest was used to reduce local tax burdens. For the schools involved, that disparity mattered a great deal: Low-income districts in strong union states saw test score gains that were twice as large as those in weak union states.

Brunner said that much of the recent research on union behavior did converge on the observation that collective bargaining drives up school spending. But he said that the academic consequences of that trend were “mixed, and context-specific.”

“Everyone always interprets it as rent-seeking…and I’m not saying it’s not,” said Brunner. “But in this particular context, because they were so strong at advocating for keeping the money in schools versus giving it back to taxpayers, they actually got more money into schools than places with weaker unions. That led to better outcomes for kids.”

“You can imagine that in a district where students are poor and achieving at lower levels, there are other issues in those sorts of districts — discipline and safety, the districts’ ability to afford to recruit teachers — that might compel teachers to have stronger unions and more stringent collective bargaining agreements,” he observed. “So the causal arrow could go in the other direction.”

Teachers unions have been a subject of contention since their inception in the mid-20th century. But the past decade has been an era of particular tumult, as political efforts to dilute their power clashed with a resurgent wave of labor activism.

It has been almost a decade exactly since then-Gov. Scott Walker signed a slate of reforms aimed at paring back labor’s strength in Wisconsin, one of the birthplaces of public sector bargaining. The politically incendiary Act 10 legislation led to both long-term cost savings for the state and declining union membership in recent years.

Other states, prodded by Republican leaders and unforgiving budgetary conditions in the wake of the Great Recession, followed a similar course. Michigan became a right-to-work state. Ohio nearly did the same before voters overturned the effort through a ballot initiative. Indiana drastically narrowed the range of workplace conditions that unions could bargain over.

All of which preceded the most significant development of all: The Supreme Court’s ruling, in the landmark Janus v. AFSCME case, to forbid unions from effectively compelling workers to contribute union dues. The decision directly threatened the bankrolls and organizing capacity of teachers unions.

Marianno argued that the new and rapidly shifting labor environment made for an excellent research opportunity, especially when combined with rapidly improving research tools and access to test score data that has only been easily available since the passage of the No Child Left Behind Act.

“We saw this big ramp-up in union strength in the 1950s, ‘60s, and ‘70s, and for the most part, they’ve been fairly stable in education for quite a long time,” Marianno argued. “Now we’re starting to see state laws that repeal a lot of the protections that unions once had. What it creates is this natural experiment where we can start to leverage the variation we see naturally occurring out there in union strength to understand these more complex relationships.”

It also bears mentioning that predictions of a post-Janus implosion of union viability have thus far been proven quite premature. The 2018 “Red for Ed” movement for higher teacher salaries provoked the widest-reaching wave of teacher strikes in American history. Last spring, newly elected Democratic majorities in Virginia’s state legislature passed a law permitting teachers to collectively bargain for the first time ever. And unions have seen increasing successes in organizing charter school staffers, who have traditionally and overwhelmingly been non-union workers.

The next area of study will be the unions’ response to the COVID crisis, including their participation in reopening debates and their efforts to sway the distribution of relief funds. One proposal under consideration in Congress would earmark almost $130 billion specifically for K-12 schools, much of which would be left to districts’ discretion to use as they see fit.

But it will be difficult to measure the immediate impact of COVID, or the massive policy response it has provoked, given the uncertainty surrounding federally mandated standardized testing this spring; the Biden administration has announced that it will not grant waivers from testing, but states will be allowed to delay or alter their planned assessments, and given the extraordinary upheaval triggered by COVID-related closures and disenrollment, student results may be especially difficult to interpret. Lavertu, who professed excitement at the recent “mini-explosion” of collective bargaining research, said he was concerned about possible limitations in assessment data.

“The changes in the availability of data have been massive over the last few years, and if testing stops for some reason, we’re in trouble.”