The $130 billion for K-12 in President Joe Biden’s proposed relief plan doesn’t cover the full price tag of what the administration thinks it will cost to reopen schools, according to a White House breakdown of expenses obtained by The 74.

The various categories, such as $50 billion for reducing class sizes and $3 billion for school nurses, total $199 billion. With $54 billion already allocated to districts from a December relief bill, that leaves $15 billion not covered by the new plan.

“It is not the end of our work or the end of [the president’s] efforts to help bring relief to the American public,” she said. “It is a first step.” (See a full breakdown of the 12 prioritized line items in the spending proposal)

With the Senate passing a budget resolution early Friday morning along party lines, Congress can now move forward with crafting the Democrats’ relief bill. The document, which refers to estimates from the American Federation of Teachers and a December Centers for Disease Control report, provides more detail on how the administration arrived at its figures and where states and districts will likely direct the funds.

The bulk of the total — $147 billion — focuses on maintaining and increasing staffing levels of teachers, nurses, custodial staff and other positions, while $9.5 billion is allotted for supplies such as masks and barriers between students.

The cost estimates match “the needs we’re hearing from principals on the ground,” said Danny Carlson at the National Association of Elementary School Principals. “I think this plan rightly recognizes it’s going to take months for schools to dig out from the challenges induced by this pandemic, which will persist long after schools reopen.”

While earlier relief bills provided flexibility for districts to spend funds on summer school, tutoring or other strategies to help students catch up, the gaps have only widened with continuing school closures. The Biden plan estimates $29 billion to provide 20 extra days of instruction to address pandemic-related learning loss. That’s less than the $36 billion estimate from the Learning Policy Institute, the Stanford University-based think tank led by Linda Darling-Hammond, who oversaw Biden’s education transition team. But even that estimate, included in a May 2020 report, was made in the early months of the pandemic.

A recent report from Education Resource Strategies suggested districts would need to add an average of two months of additional instruction each year for the next five years to recover seven to eight months of learning. Many students, however, have now been learning remotely for nine months. The report estimated an average of $12,000 to $13,500 per student over the next five years in large urban districts to make up for lost instruction.

“This short-term infusion would allow districts to make aggressive in-roads” in helping students make the gains they would have if schools hadn’t closed, Jonathan Travers, a co-author of the report, said about Biden’s plan. “But in our most affected communities, it’s going to take an investment of new resources over several years and a strategic reorganization of people, time and money to tackle inequities and unsustainable underlying cost structures.”

And with high rates of COVID-19 persisting in some regions of the U.S. and ongoing disputes between unions and districts over when schools will reopen, many students might not return until well into spring.

The line items in the document explain some of the exchanges Wednesday between senators and education secretary nominee Miguel Cardona during his confirmation hearing. Cardona, for example, said he was pleased to see specific funding in the president’s plan for school counselors. The breakdown sets aside $10 billion for counselors and school psychologists.

Republican Sen. Mitt Romney of Utah referred to the president’s request for a 10 percent increase in teachers. “This would be some 350,000 additional educators,” he said. “I don’t presume that it’s their plan or your plan to fire these educators when COVID is over. Is that right?”

Other costs spelled out in the document include $14 billion for additional transportation costs, $7 billion for students’ at-home internet service, $1 million for community schools and $2 billion for grants that address pandemic-related educational inequities.

On Wednesday, the House passed its budget resolution, but will need to vote again on the Senate’s plan. When that occurs, both chambers can move forward with a fast-track “reconciliation” process allowing them to pass the president’s full, $1.9 trillion package — if necessary, without Republican support.

The majority-led process, however, didn’t stop Republicans from reviving the Trump-administration’s position that schools should reopen in person before they receive more federal funds. Similar disputes are playing out at the local level, with San Francisco suing its school district for not reopening schools and the Montclair, New Jersey, district taking its teachers union to court in an effort to force teachers to return.

The House on Wednesday voted against Iowa Rep. Ashley Hinson’s Reopen Schools Act by a vote of 219-207. Meanwhile in the Senate, Republican Sen. Josh Hawley of Missouri introduced a similar amendment to the budget resolution that would direct federal funds only to schools that reopen. As expected, Democrats didn’t allow the measure into the resolution. 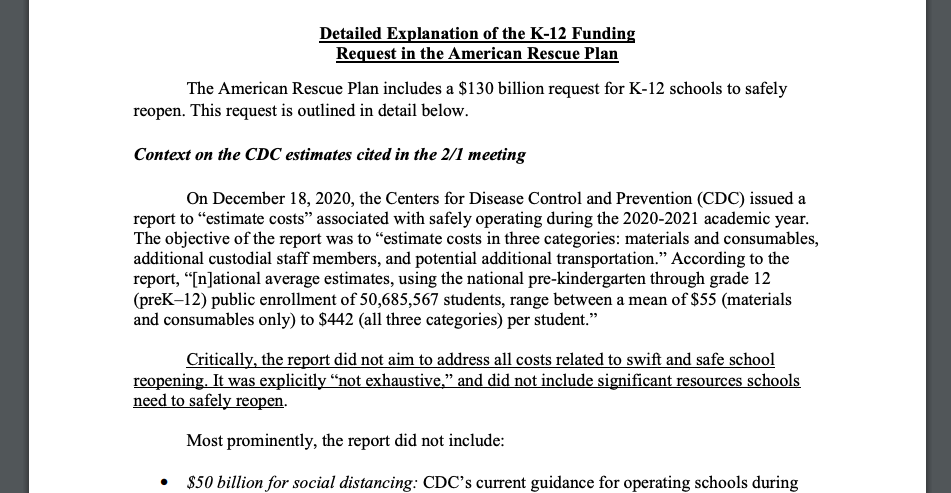