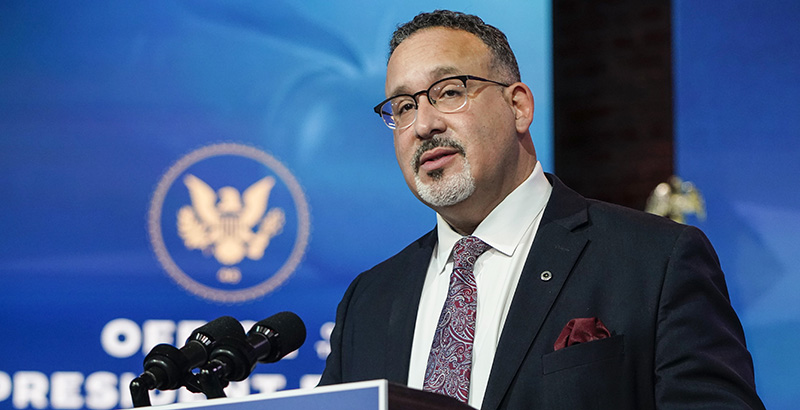 The Senate voted 64-33 Monday to confirm Miguel Cardona as education secretary — the final hurdle before the former Connecticut state chief is sworn in to lead the U.S. Department of Education.

Speeches ahead of the vote focused on Cardona’s strengths as a former teacher, principal and state leader.

“President Biden couldn’t have made a better choice,” said Connecticut Sen. Richard Blumenthal, a Democrat from his home state. “[Cardona’s] climb looks meteoric and miraculous, but it was based on hard work and a dedication and passion to education for others.”

Sixteen Republicans crossed the aisle to vote for Cardona, including Minority Leader Mitch McConnell of Kentucky and Sen. Richard Burr of North Carolina, the ranking member on the education committee. But the vote generated more opposition than expected, with GOP members voting against him including Sen. Mike Braun of Indiana, Sen. Tommy Tuberville of Alabama and Sen. Rand Paul of Kentucky. During Cardona’s initial hearing before the Senate education committee, Paul challenged him on his support for transgender students competing against girls in sports.

The first elementary educator to serve as secretary, Cardona will take over after a hectic six weeks for the Biden administration that included mixed messages over reopening schools, executive orders related to students’ civil rights and a decision not to pause standardized testing for a second year.

Later this week, first lady Jill Biden is scheduled to visit Cardona’s hometown of Meriden, Connecticut, where he began his education career and served as a central office leader before being appointed commissioner in 2019. The White House has not yet released details on the visit, but Biden is expected to visit classrooms while she’s there.

There’s “so much on his plate as he enters the doors on Maryland Ave,” the street in the nation’s capital where the U.S. Department of Education is located, said Deborah Delisle, CEO and president of the Alliance for Excellent Education and a former assistant education secretary during the Obama administration. “I think he will work to re-engage internal staff and begin developing partnerships externally — meeting with as many folks as he can.”

With less than two months to go before Biden hits his first 100 days in office — the deadline he set for himself to have most K-8 students back in school — Cardona will also likely “attack” the school reopening issue, Delisle said.

But the administration’s next relief package, which includes almost $130 billion for K-12, still needs Senate approval. The Senate will consider the bill this week, but if Democrats succeed in adding a minimum wage increase, the package would go back to the House. In the meantime, Cardona will have to find other ways to convince both teachers and some parents, particularly those in many large, metro areas, that it’s safe to return to the classroom.

Dale Chu, a senior visiting fellow with the conservative Thomas B. Fordham Institute, agreed that Cardona’s first priority should be getting students back into school.

“Normalcy as a nation depends on reopening schools,” he said, adding that while education secretaries have limited power, “he does have three key levers — rulemaking authority, convening authority and the bully pulpit. I can see him using the latter to push, pull, and otherwise cajole states and districts on school reopening.”

While several political appointees are now in place at the department, the Senate education committee has not yet considered the nomination of Cindy Marten, Biden’s choice for the number two position. With some controversy surrounding her nomination, Marten might face tougher questioning than Cardona did last month.

Some characterize Marten, the current superintendent of the San Diego Unified School District in California, as a successful and innovative district leader. But others say she’s too closely aligned with the unions on the issue of charter schools and has a mixed track record on equity and reducing racial disparities in discipline.

Sen. Richard Burr, ranking Republican on the education committee, has not yet expressed an opinion on Marten’s nomination. He has, however, made positive comments about Cardona, and said during his confirmation hearing that “we should be able to find places where we can agree.” The committee voted 17-5 in favor of his confirmation.

The administration will also highlight its popular choice for secretary when Jill Biden visits Meriden, where the Cardona family has deep roots.

“I suspect that she will reiterate her support for educators, especially given the pandemic issues and returning to school,” Delisle said. “I am sure she will give him a rousing ‘Welcome to D.C.’ hug — well, actually, a round of applause and an elbow bump given social distancing.”

After COVID, a Need for ‘Year-Round’ School to Catch Kids Up?