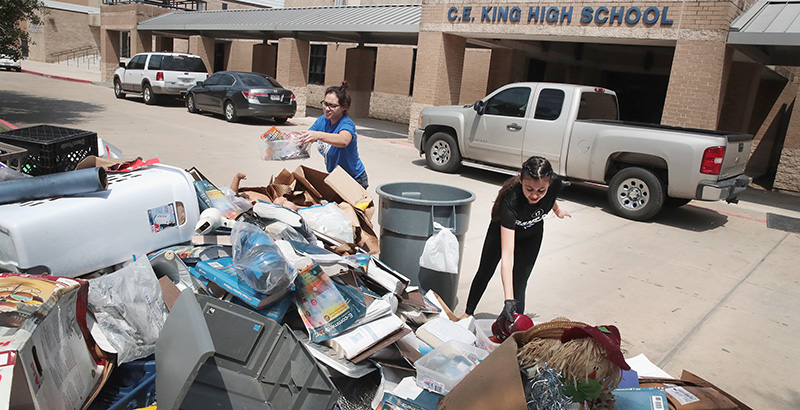 The Houston Independent School District is facing a budgetary double whammy: the ongoing expense from Hurricane Harvey and a $200 million budget shortfall for next year. The district will also have to pay millions of dollars in so-called Robin Hood payments to the state, which will be funneled to poorer districts, the Houston Chronicle has reported.

The Chronicle said the budget deficit results from decreasing tax revenue due to hurricane-damaged property in the district and a high Robin Hood payment, a cost officially known as a recapture payment, which the state collects from districts that have high property tax income and distributes to lower-income districts.

This year, the recapture payment could be as high as $269 million for Houston, according to a statement from the district. Superintendent Richard Carranza called the crisis “a perfect financial storm that is unavoidable” in a statement released Tuesday afternoon.

Rene Barajas, the district’s chief financial officer, told the Chronicle that even though the recapture payments might be lessened due to the storm, the decrease is not going to be proportional to the decrease in property taxes after Harvey, which may cause the district to come up short.

The district is also in the process of rebuilding four schools from the ground up because of extensive damage caused by Harvey, at a cost of $126 million.

To deal with the tight budget, officials announced plans over the weekend to make cuts at almost every level of the school system, the Chronicle reported. To make ends meet, officials proposed centralizing some processes, regulating staffing across campuses, and making major changes to the city’s network of magnet schools. Officials also proposed cutting $116 million from the budget for “central administration, operations and facilities,” according to the Chronicle.

“Those changes will hurt, but we are starting the conversations early to ensure we make those changes without compromising quality equitable education for all of our students,” Carranza said in the statement.

Meanwhile, in Austin, Texas, a bipartisan committee had its first meeting Tuesday to discuss how the state should finance schools after the 2016 Texas Supreme Court ruling that found the current system, which mostly relies on property taxes, in need of “transformational, top-to-bottom reforms.” The panel is slated to make recommendations to the legislature and governor by the end of the year.

On top of the financial storm, 10 Houston schools are at risk of being rated “underperforming” for the fifth consecutive year, which would prompt a state takeover. But district administrators have proposed broad changes for those schools plus five other low-performing schools. State law allows districts to maintain control if they permit outside organizations — charter schools, nonprofits, or higher education institutions — to take over struggling schools, according to the Chronicle.

District officials have said they will either close the schools and reopen them with limited grade levels and all new staff and programming, or hand over control of hiring and curriculum to a higher education institution or nonprofit organization.

The superintendent responded on Twitter to claims that the district was going to be “turned over to a charter system,” saying “Do not buy into the hype.”

NOT going to happen. Wait for details. Do not buy into the hype. https://t.co/kcKiGOJPPM