The nation’s K-12 schools reacted to the disruption of COVID-19 in broadly similar ways regardless of whether they were district, charter or private, according to new research released Monday.

In general, traditional public schools did not lag behind charters or private schools, except for a few days near the beginning of the COVID-19 crisis when they were somewhat slower to switch to online learning, according to the study by Tulane University’s National Center for Research on Education Access and Choice (REACH).

By May, overall scores in five performance areas measured by researchers were comparable for all school types, though private schools lagged significantly in both equity of access and breadth of service.

That finding is somewhat predictable, given that private schools tend to serve fewer students who might require supplementary services like school meals, and they are not subject to the same requirements as public schools when it comes to accommodating special education students or English language learners. On the three other measures (personalization and engagement, both inside and outside of class, as well as monitoring of academic progress), the three sectors are roughly on par with one another.

That coalescence among different school types defies the notion that public schools were particularly slow or inept in their transition to virtual instruction, said Douglas Harris, an economics professor at Tulane and the director of REACH.

Harris noted that Education Secretary Betsy DeVos recently “hammered traditional public schools and [made] allegations about a lack of response during the spring” that were “blatantly false.” In TV interviews this weekend addressing the Trump administration’s push for all schools to open full time this fall, DeVos argued that districts should follow “really good examples that have been used in the private sector.”

That argument “doesn’t seem very sensible given what we’re finding here,” said Harris. “The responses were actually very similar across sectors. Each sector was focused on different things, but the overall response is very similar.”

The study, conducted over the past few months, is part of an ongoing effort to chart how the American education system copes with an unprecedented public health catastrophe. The Institute for Education Sciences (IES), a research body within the U.S. Department of Education, helped fund the initiative with a $100,000 grant.

Categorizing the actions of thousands of schools over the most tumultuous few months in recent memory presented special logistical challenges. Harris said the unforgiving timeline and constant influx of new data made the study “the hardest project we’ve ever had to do.”

“We had to do it so fast — start to finish, in 17 weeks,” he told The 74. “A report like this would normally take two years, so we had to both maintain the standard that we would normally set for ourselves, but do it 10 times faster than we normally would.”

The new report relies on analysis of the public websites of more than 3,500 public, private and public charter schools, a sample designed to be nationally representative across demographics, geography and school type. Harris and his co-authors spent the month of May collecting the information available on each site to develop a picture of how each school transitioned to virtual learning.

The comprehensiveness of each school’s response is scored based on five performance areas: personalization and engagement of online instruction (i.e., the use of live instruction and various online tools to conduct lessons), personalization outside of class (the frequency with which students and teachers interacted during events such as office hours and morning meetings), monitoring of data like online attendance and grades, continuity of non-academic services such as school meals and student counseling, and equity of access to populations like special education students and English language learners.

To score individual schools, authors made note of which websites mentioned learning plans for ELL students, for instance, and which carried on tracking attendance and grades even as school lockdowns continued. The data were entered into an index that generated scores, from 1-10, on each of the five domains.

Out of a possible score of 50, Harris and his team found that the average school’s score was a 9.0. That dismal finding inevitably reflects some degree of under-counting, he noted, given that not all schools keep meticulous track of how they are addressing the coronavirus crisis. Even with the limitations of publicly available data, however, the authors pointed to some important trends.

First, family demographics did not necessarily predict the quality of educational responses to the coronavirus, with one exception: The level of education of parents and other adults in a given neighborhood was correlated with higher performance scores. Harris called educational attainment “the main driver” in differential responses, though not a surprising one; schools could more readily bring their classrooms online, he said, if they could rely on highly educated parents at home to help them implement virtual lessons.

“All the things that parents with college degrees were doing before, they were doing it even more under the crisis,” Harris observed. “Having more time to spend with kids in their white-collar jobs, being able to be at home and have flexible hours and have economic security at the same time that other high-paying jobs don’t have. If you’re a construction worker or something like that, you might make a good income, but you can’t be at home and be a construction worker.”

Another noteworthy variable was internet access. Schools located in areas that rank in the top half of the country for home internet access scored almost two points higher than those in areas at the bottom half. That phenomenon argues in favor of expanding high-speed internet access, the authors conclude.

One further variable highlighted in the report, though somewhat ambivalently, was geography. Higher index scores were measured in states in the Northeast and Midwest, while Southern states ranked lower. 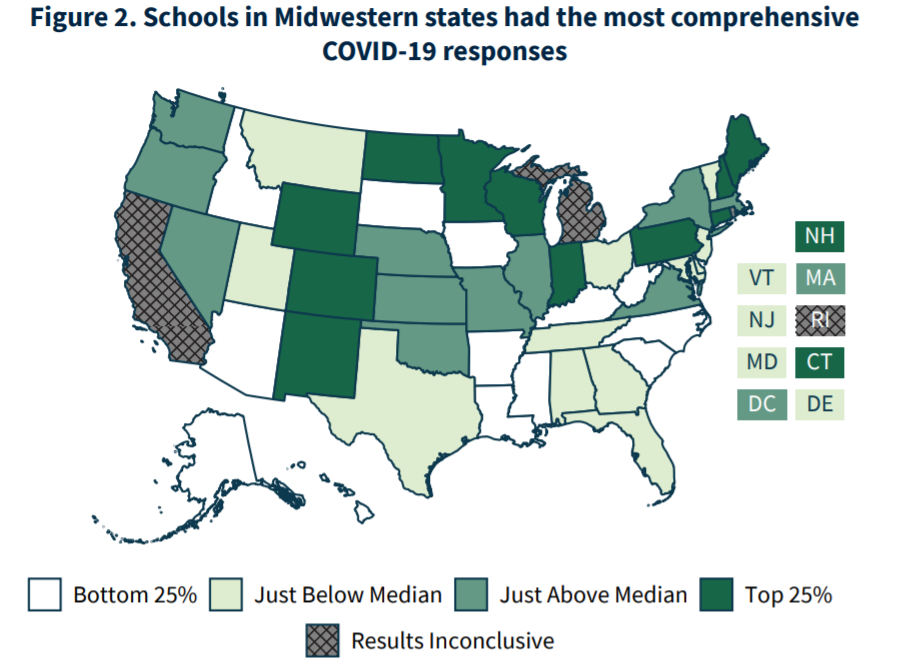 No reason is offered in the report for the variations by region, though Harris noted in the interview that schools in the South often end their school years somewhat earlier than those in other regions, which may have presented them with less time to implement a comprehensive COVID strategy.