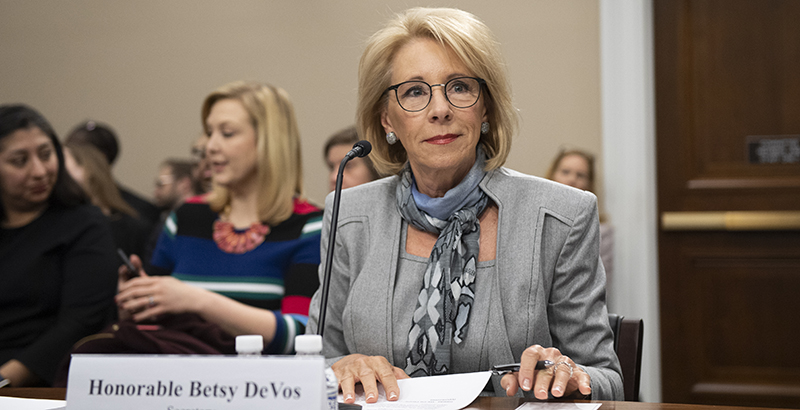 The Department of Education has made tweaks to its disputed campaign to compel states and districts to share emergency funding with private schools. A new rule issued on Thursday morning will allow districts more options in how they allocate federal relief funds, but it is still being contested by school groups who say that it hurts public school students.

Going forward, districts have one of two choices: They can distribute funds from the $2 trillion CARES Act to both public and private schools, depending on what percentage of a district’s students they enroll. Alternatively, they can share the one-off relief funding exclusively with low-income private school students, as many educators have requested — with the caveat that they can only use it to support low-income public schools as well.

The rule, which went into effect immediately even as the public has 30 days to pass comment and recommend changes, is the latest chapter in a controversy dating back to May. That month, Education Secretary Betsy DeVos put forth broader guidance recommending that local authorities disburse part of their federal relief moneys to provide “equitable services” to all students attending private schools within their district borders.

The move was received poorly by state and local officials, who said it deliberately deprived them of necessary aid in order to support private schools that enroll fewer disadvantaged students. Several state superintendents suggested they would ignore the guidance, and Republican Sen. Lamar Alexander disputed the secretary’s interpretation of the CARES Act.

DeVos responded by saying that the department would soon release a rule on the matter with the force of law, arguing that the COVID-19 pandemic and related shutdowns had already led many private schools to shut their doors. At present, 74 schools educating more than 9,500 students have closed permanently due to the crisis.

In a press release, DeVos reiterated her position that Congress intended for CARES Act funding to benefit “all American students, teachers, and families impacted by coronavirus,” adding that the law’s appropriation for colleges and universities flowed to public and private institutions alike.

“There is nothing in the law Congress passed that would allow districts to discriminate against children and teachers based on private school attendance and employment,” she wrote. “In this new rule, we recognized that CARES Act programs are not Title I programs. If a district chooses to limit the use of this funding to serve only low-income students, they must do so equitably for students in both public and private schools.”

The policy represents a wise balancing of interests, according to Neal McCluskey, director of the Center for Educational Freedom at the libertarian Cato Institute.

“This rule may be the best compromise possible, finding the midpoint between what seemed to be the clear wording of the statute — money should be allocated according to poverty levels — with the clear intention of the statute: to provide broad education relief,” he wrote. “It probably won’t fully satisfy anyone, but that would be a sign it got things right.”

Others aren’t so certain. The rule has been touted as a victory for public school districts, in that they may now set aside aid for private schools based solely on what percentage of low-income students they enroll — rather than on the percentage of total students they enroll, as DeVos originally intended. But Scott Sargrad, vice president of K-12 education policy at the liberal Center for American Progress, said he was “not so sure it is actually a big win for states and districts, or that much of a concession.” If they limit CARES Act funding to low-income private school students, the rule states they must limit them to low-income public school students as well.

“It’s only if they restrict their uses of funds to Title I schools and students that they can then do what they have been asking for — and what is typical under Title I — which is to calculate equitable services based on low-income students in private schools,” he said.

Complicating matters is the fact that the decree has been advanced as an “interim final rule” — a seeming oxymoron that allows a public comment period to pass on new federal regulations even as they exist with the force of law.

Sargrad, who previously served in the Obama administration as a deputy assistant secretary for elementary and secondary education, characterized the move as a notably “aggressive” approach to the federal rulemaking process. The new policy was likely to be contested, he added, whether in Congress or the courts.

“There will probably be some challenges here. It is an interpretation of the law that could be challenged, it’s not obviously the sole interpretation, and it does disadvantage students in public schools.”