As the pandemic’s havoc on K-12 education reaches the one-year mark and the death toll tops 500,000, a growing share of Americans believe that learning loss due to prolonged campus closures should be a top consideration in reopening decisions, according to the results of a Pew Research Center survey released Wednesday.

In total, 61 percent of respondents said that education leaders should give “a lot” of consideration to potential learning loss as they weigh whether to reopen campuses for in-person learning. The data represent a sharp increase from July 2020, when just 48 percent of adults said that learning loss should be a top consideration in school reopening plans and a far larger number of respondents said that the threat of teachers and students getting and spreading the virus should be a major concern.

What has not changed since the summer is that white adults are still far more likely than Black adults to say that schools should reopen sooner rather than later.

But even while learning loss emerged as a stronger imperative in the latest polling, that doesn’t mean the bulk of U.S. adults are insisting that schools reopen for in-person learning immediately. While 40 percent of survey respondents said that schools should reopen as soon as possible, a majority — 59 percent — said that if campuses are currently closed, they should stay that way until all teachers are offered the vaccine.

Meanwhile, the pandemic’s health risks to teachers and students has become less of a priority. In July, 60 percent of adults said officials should give “a lot” of consideration to teachers getting or spreading the coronavirus, and 61 percent said the same about students. By this month, those figures dropped to 48 percent and 45 percent, respectively. That could reflect more recent understanding that schools, particularly at the elementary level, have not turned out to be vectors for COVID-19 transmission.

In fact, adults put a larger emphasis on students’ emotional well-being than they did on the risks that students or teachers could become infected if schools reopen — a reality that mirrors growing evidence that prolonged education disruptions have led to a surge in depression and anxiety among young people. In total, 54 percent of adults said that students’ emotional well-being should be a top consideration in reopening decisions, and a similar share said the same about parents’ ability to work if their children are learning from home. Just one-third of adults said that school districts’ financial burden to follow public health guidelines should be a top factor in reopening decisions.

Earlier this month, the Centers for Disease Control and Prevention released new guidance on how to safely reopen campuses, advising that K-12 students can return to classrooms full time in communities with low to moderate spread of COVID-19. Schools that reopen should enforce mask rules and ensure social distancing among other recommendations, according to the CDC, but providing vaccines to teachers shouldn’t be a prerequisite.

Across Pew’s questions, responses didn’t differ between adults with children and those without them. But partisan divisions were stark, similar to views on other pandemic mitigation measures like mask mandates. While 65 percent of Republicans said that schools should reopen as soon as possible regardless of whether teachers have been offered the vaccine, just 20 percent of Democrats agreed. At the same time, 79 percent of Democrats and 34 percent of Republicans said schools that are currently closed for in-person learning should remain shuttered until teachers are given the vaccine.

Despite the partisan divisions, both Democrats and Republicans are more likely to say learning loss should be a major factor in reopening decisions than they were last July. The same is true with regard to health considerations. Across the political spectrum, respondents were less likely to say health risks should be given a lot of consideration in reopening decisions.

“They’re moving in similar directions but the patterns that we see in terms of the differences” between Republicans and Democrats remain the same, Horowitz said. 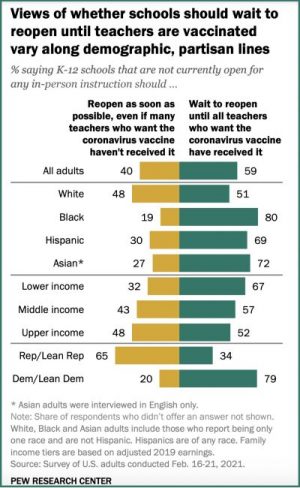 The pandemic has had a disproportionate impact on people of color and those from low-income households — a reality that appears to be influencing adults’ opinions on school reopening decisions. Similar to trends from last summer, Pew found that Black, Hispanic and Asian adults were more likely than white respondents to believe that the potential health risks to teachers and students should be a top consideration in school reopening debates. Just 19 percent of Black adults said that schools should reopen as soon as possible compared with 48 percent of whites. While two-thirds of lower-income adults believe that schools should wait to reopen, the issue was more divisive among their more affluent neighbors.

The Pew survey is one in a slew of parent polls in the last year about schooling during the pandemic, a topic that’s brought emotions to the boiling point and has become highly politicized. But poll results on the topic, as FiveThirtyEight notes, can differ widely depending on how the questions are asked. For example, public opinion polls have reached different conclusions about the popularity of distance learning and the degree to which the pandemic is having a detrimental effect on childrens’ mental and emotional health.

Taken as a whole, the polls — including the one by Pew — highlight how parents are being forced to weigh complex and competing factors before reaching conclusions.

Pew administered its online survey between Feb. 16 and 21 and included a nationally representative sample of 10,121 U.S. adults. Results have a margin of error of plus or minus 1.6 percentage points.