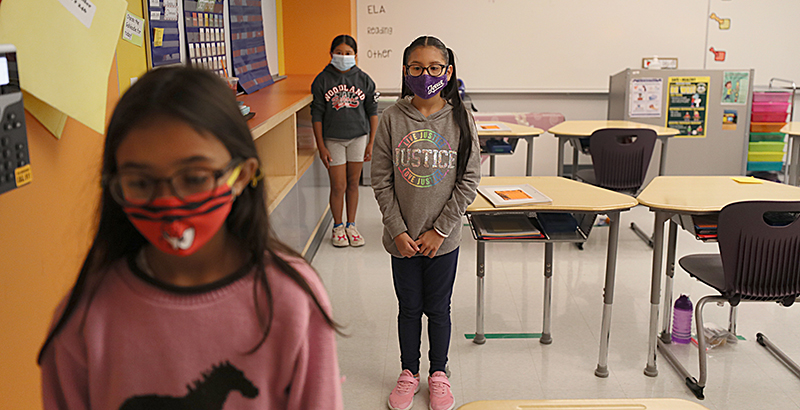 Masked children line up to wash their hands at Woodland Elementary School in Milford, Massachusetts. Milford was one of the first school districts to reopen in the state, with a hybrid model. (Suzanne Kreiter / The Boston Globe / Getty Images)

Students — even those in high school — can return to classrooms full time in communities with low to moderate spread of COVID-19 as long as schools enforce universal mask wearing and 6 feet of distance between students, the Centers for Disease Control and Prevention said Friday in updated school reopening guidance.

The agency also recommends handwashing, cleaning and contact tracing for all schools. But vaccinations for teachers, routine coronavirus testing and upgraded ventilation are “extra layers of support” that don’t have to be in place before schools reopen, said CDC Director Dr. Rochelle Walensky.

“The science has demonstrated that schools can reopen safely prior to all teachers being vaccinated,” she said, calling the new document a “long-needed roadmap” that was based on a thorough review of the science as well as input from parents, teachers and school leaders. “There’s more science to rely on, and we’ve learned a lot from that science.”

For example, while she recommends some cleaning of surfaces, “full fumigation” of classrooms isn’t necessary, she said: “I don’t believe the data suggests there is a lot of transmission that comes from surfaces to people.”

Grouping students into pods that stay together, using cafeterias and other common areas as classrooms and seating one child per row on a school bus are other highlighted strategies. The U.S. Department of Education released a companion handbook with additional examples.

“We need to get kids back in the classroom, and to do that, schools and educators need help,” said Donna Harris-Aikens, senior adviser for policy and planning at the department.

Education organizations, including the Council of Chief State School Officers and the National Association of Elementary School Principals, reacted positively to the guidance.

“With the new year, new Congress and new administration, we are greatly appreciative of the deliberate, coordinated and focused federal leadership on both prioritizing the physical reopening of schools and supporting schools in their work to do so,” said Dan Domenech, executive director of AASA, The School Superintendents Association.

The guidance, which Walensky said was “free from political meddling,” comes after a week of mixed messages from the administration related to reopening schools and questions over whether President Joe Biden would side with teachers unions holding out for vaccines. In addition, the CDC guidance goes beyond Biden’s pre-inauguration pledge of reopening a majority of K-8 schools within his first 100 days in office by outlining guidelines that include in-person attendance for high school students.

“Infection, hospitalization and test positivity are down sharply. Vaccine distribution is ramping up,” said Rick Hess, director of education policy studies at the conservative American Enterprise Institute. “The science shows that schools are not a significant source of contagion, and the devastating effects of closure have become increasingly clear.”

Hess was among those this week suggesting the administration had lowered the bar when White House Press Secretary Jen Psaki said “open” means having at least 50 percent of teachers in classrooms “at least one day a week.”

Today's swing and a miss comes to us from the White House press briefing room.

I can't believe what I heard today.https://t.co/MeTUpmyI4N

On Wednesday, Psaki elaborated on the issue, noting that the administration was “not planning to celebrate at 100 days” if schools were open only one day a week.

“That is not the ceiling,” she said. “That is the bar we’re trying to leap over and exceed.”

According to Walensky, few counties across the U.S. — only about 5 percent — have transmission rates low enough to relax the 6-foot social distancing requirement.

A new color-coded system organizes schools into zones, ranging from blue for low risk of transmission — where there are nine or fewer cases among 100,000 people in a seven-day period — to red, where there are 100 or more positive cases per 100,000. The agency recommends full in-person learning for schools in blue and yellow zones and hybrid schedules for those in orange zones, where spread is substantial.

Red zone schools would fall into two groups. Those that regularly test students and staff for the coronavirus could have hybrid learning for all grade levels, but those that don’t should limit hybrid to the elementary grades and have middle and high school students learning remotely full time.

Only about 5 percent of counties in the U.S. are currently in blue zones, said CDC Director Dr. Rochelle Walensky. (Centers for Disease Control and Prevention)

John Bailey, a visiting fellow at the conservative American Enterprise Institute, tweeted that the categories could confuse people who are used to their own state’s colored tiers. In California’s blueprint, for example, counties where the risk of transmission is “widespread” are coded purple.

Some districts have already announced that they don’t expect to reopen before the end of the school year. And Robin Lake, executive director of the Center on Reinventing Public Education at the University of Washington, expects more to join the list “unless parents revolt.”

For months, parents across the country have lost patience with districts delaying the reopening of schools. Protests, lawsuits and angry outbursts at school board meetings have increased.

Biden, in a CBS interview last Sunday, described moms leaving the workforce because their children aren’t in school as “a national emergency.” But parents would need to continue to make child care arrangements or try to work from home if their children attend only school once or twice a week.

“Parents are looking for a plan, for stability and decision making based on science from public health officials,” Rodrigues said. “We can’t keep moving the goalposts and the metrics based on which way the political winds are blowing for the unions.”

Leaders of the National Education Association and the American Federation of Teachers say their members want to return to class, but demand testing and vaccines.

“We remain supportive of widespread testing — especially as mutant strains multiply in areas of uncontrolled community spread — and we urge the CDC to remain flexible as more data comes to light,” AFT President Randi Weingarten said in a statement. “The guidance is instructive for this moment in time, but this disease is not static.”