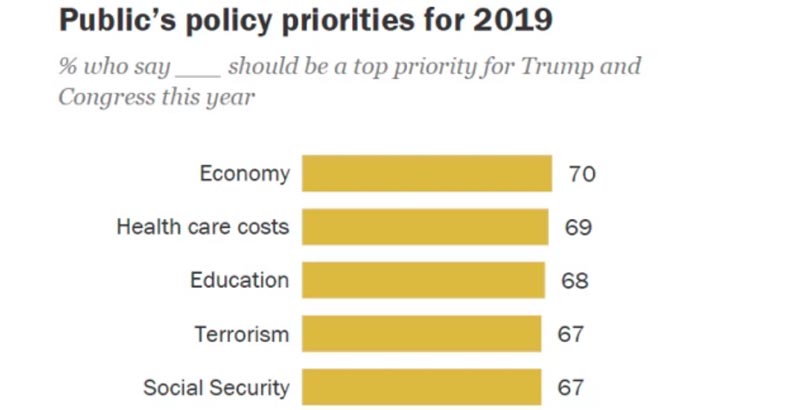 Americans cited education as the No. 3 priority for President Trump and Congress going into 2019, outranking terrorism, immigration, or jobs, according to a new Pew Research survey.

The survey, conducted in January, reveals that 68 percent of Americans think improving the nation’s educational system should be a top priority for lawmakers and the president, ahead of terrorism (67 percent), immigration (51 percent), or jobs (50 percent).

The survey asked 1,505 American adults whether 18 policy issues should be “a top priority,” “important but lower priority,” “not too important,” or “should not be done.”

Domestic issues such as education and health care have become more important to the public as “economic and security concerns have become less prominent,” the Pew authors write. Still, strengthening the economy has remained one of the top priorities for years on the annual survey.

Congress is expected to consider reauthorizing the Higher Education Act this year, and the House education committee on Tuesday advanced a plan to provide about $100 billion to improve crumbling school infrastructure. Other than that, however, there aren’t many education items on federal lawmakers’ 2019 agenda. Trump briefly mentioned school choice in his State of the Union address last month but offered no details.

This year’s results show a sharp partisan divide over policy priorities that emerged relatively recently, Pew reports. In 1999, education topped the list of priorities for both parties, and as recently as 2014, Republicans and Democrats mostly agreed about what the top five priorities were. This year, there was no shared consensus on the top five concerns between GOP and Democratic respondents, with Democrats listing education as their second most important priority and Republicans leaving education out of their top five altogether, ranking it eighth. More survey respondents in 2019 identified as Democrats (31 percent) than Republicans (25 percent) and more of the independent respondents said they leaned Democratic (18) than Republican (16). 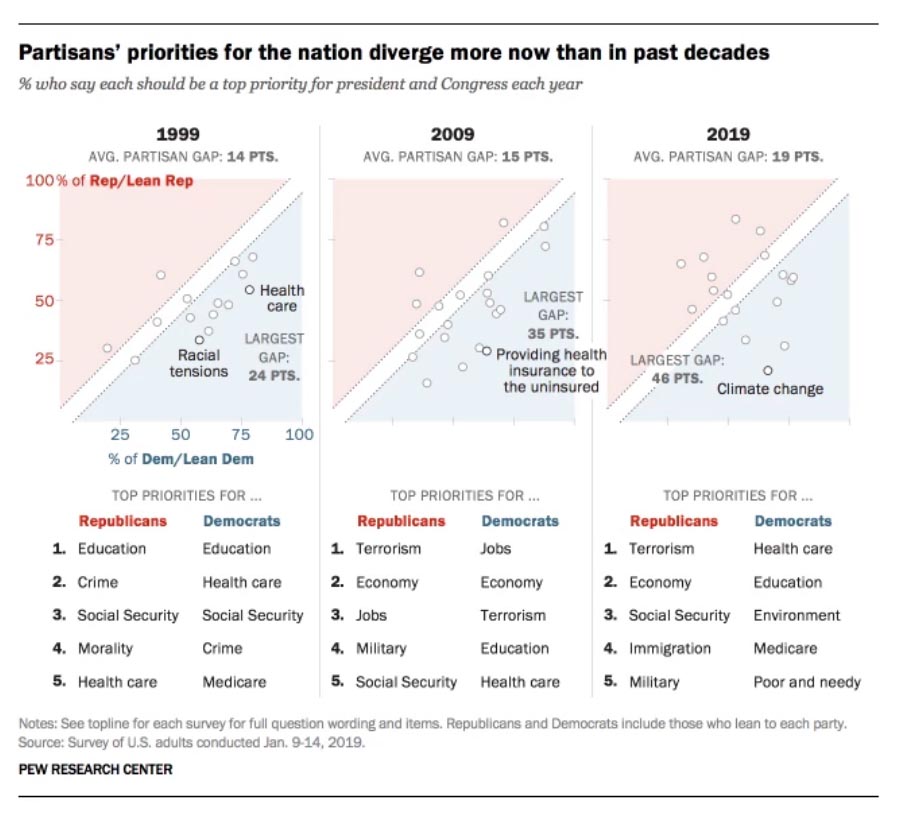 “While many issues are considered high priorities by majorities in both parties today, there is virtually no common ground in the priorities that rise to the top of the lists for Democrats and Republicans,” writes Pew research associate Bradley Jones.

The share of Americans calling education a top priority has mostly hovered between 65 and 75 percent over the past two decades. It dropped to 61 percent of respondents in January 2009, coinciding with the recession and large majorities saying strengthening the economy (85 percent) and improving the dire job situation (82 percent) were more urgent issues.

Concern for education spiked in 2001 when Congress was considering the former K-12 education law known as No Child Left Behind, with 78 percent of respondents calling it a top priority that January, second only to the economy. However, education did not see a similar boost in 2015 when the law was replaced by the Every Student Succeeds Act.

Exclusive Map: Experts Review the States That Have (and Haven’t) Developed New School Turnaround Plans Under the Every Student Succeeds Act

Pew conducted the survey of 1,505 adults Jan. 9-14 by phone, overwhelmingly reaching respondents on their cell phones. The margin of sampling error is plus or minus 3 percentage points for results based on the full sample.