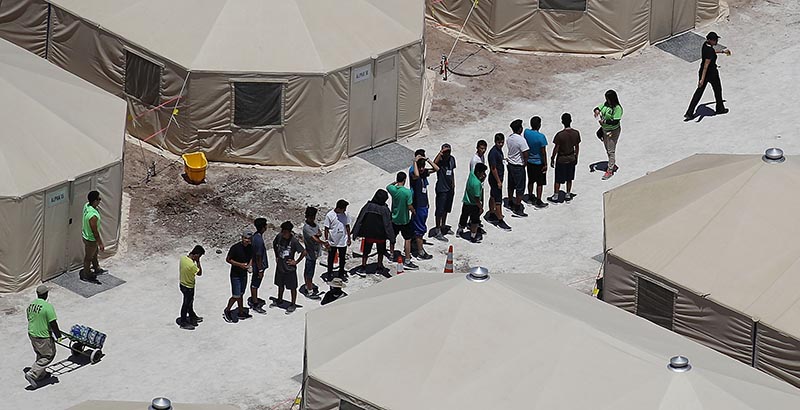 Children and workers are seen at a tent encampment recently built near the Tornillo Port of Entry on June 19, 2018 in Tornillo, Texas. The Trump administration used the Tornillo tent facility to house immigrant children separated from their parents after they were caught entering the U.S. under the administration's zero tolerance policy. (Joe Raedle/Getty Images)

The Trump administration policy of separating migrant youth from their parents at the U.S.-Mexico border has exacerbated mental health problems including post-traumatic stress among affected children, according to a new government watchdog report. Immigration and education experts predict that the debilitating effects of family separation will be felt in K-12 classrooms across the country as the children enroll in public schools.

The report by the inspector general of the Department of Health and Human Services noted that many children entered the facilities after fleeing violence in their home countries and experiencing threats during their journeys to the U.S., and family separations worsened mental health problems. The report relied on interviews with mental health clinicians, medical coordinators and facility leaders at 45 migrant shelters funded by the department’s Office of Refugee Resettlement. Shelter visits were conducted in August and September 2018.

Children subjected to family separation, the report noted, demonstrated more fear, feelings of abandonment and post-traumatic stress symptoms than those not separated.

“Separation from parents and a hectic reunification process added to the trauma that children had already experienced and put tremendous pressure on facility staff,” according to the report.

That added trauma from family separations was “the direct result of administration policies and choices during that time,” said Mark Greenberg, a senior fellow at the Migration Policy Institute, a Washington think tank, where he focuses on migration policy and social services. Greenberg previously worked at the Department of Health and Human Services during the Obama administration. While there’s more the federal government can do to provide trauma services, “the real point is to avoid creating more situations of trauma in the first place,” he said.

The report “underscores how destructive it was to have large numbers of separated children coming into the system,” he said. “It was made worse by the lack of preparation, but even with preparation, the reality was going to be that children forcibly separated from their parents were going to be deeply traumatized.”

“You get a lot of ‘My chest hurts,’ even though everything is fine [medically],” one medical director told the government watchdog. “Children describe symptoms, ‘Every heartbeat hurts,’ ‘I can’t feel my heart,’ of emotional pain.”

Though the report centered on challenges shelters faced in providing mental health services to an influx of children in their care — and not their educational needs — experts said trauma as a result of family separations could affect schools across the country. Once the children are released from custody, they’re placed with sponsors such as parents or other family members. At that point, they’re eligible to enroll in public schools, said Julie Sugarman, senior policy analyst for preK-12 education at the Migration Policy Institute. But she noted that there’s a lack of data on the education migrant children receive once they’re released from the shelters.

“We don’t know how many are enrolling versus just simply not enrolling or staying in the shadows,” she said.

Migrant children, not just those separated from their parents, often come to this country after experiencing trauma from violence, home displacement, malnourishment and even torture in their home countries, according to a fact sheet by the National Association of School Psychologists. Those conditions can affect students’ concentration, cognitive functioning, memory and social relationships.

The school psychologists association says it’s important for schools to recognize the trauma students may have experienced and to demonstrate sensitivity to family stressors and develop intervention plans for at-risk children. Schools need to assess the children’s academic and emotional needs, said Katherine Cowan, the association’s spokeswoman.

Negative outcomes can compound if migrant children are placed in communities where residents are hostile toward their experiences, Cowan said.

“The other thing that schools need to do is ensure that those kids are kept safe, that they are in welcoming school environments and that they do not tolerate any hate-driven speech or actions,” she said.

Prior to the new report, the psychologists association raised an alarm about the conditions children experience inside the shelters. In June, the association called on the Trump administration and Congress to improve the services for children held in “unsafe conditions that lack basic physical necessities, fail to provide proper adult care, inflict unnecessary cruel punishment and risk causing trauma.”

“Our professional values as school psychologists require us to act,” the association wrote in an open letter, which noted that adverse childhood experiences “have been linked to outcomes including suicidal attempts and thoughts, alcohol and drug abuse, diabetes, depression and increased risk of physical injury. Experiences of trauma may be particularly difficult for young children to resolve.”

Once migrant children are released from shelters, schools can play an important role in providing them with needed services, Greenberg said. The children, who are unauthorized residents, are often placed with family members who are themselves undocumented, Greenberg said. As such, they’re typically ineligible for public benefits and may lack access to mental health services.