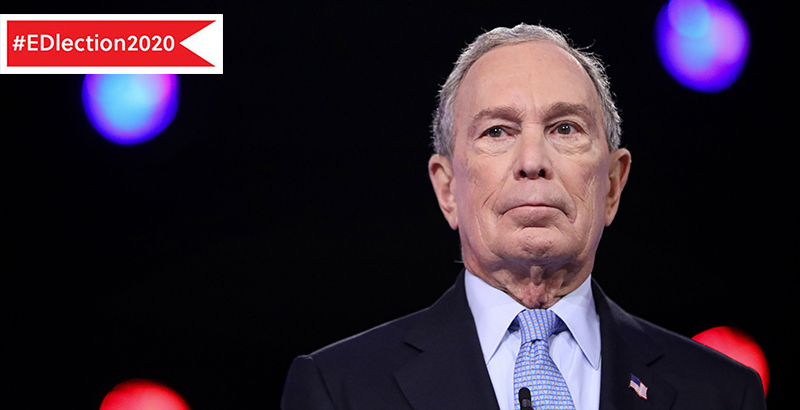 For someone who has dropped $7 million a day of his own money to become president of the United States, former New York City mayor Michael Bloomberg has often appeared awkward and unprepared on the Democratic debate stage. He’s stumbled over easy-to-anticipate attacks regarding “stop and frisk” policing and allegations of sexual harassment. And the less we say about his “Naked Cowboy” quip, the better.

So among edu-watchers, particularly the long-suffering charter sector, ears perked up Tuesday evening when moderator Bill Whitaker of CBS asked Bloomberg about his support of school choice as mayor: “A key element of your response to failing schools in New York City was a dramatic increase in public charter schools. As president, would you pursue that same strategy and seek to expand charter schools nationwide?”

Bloomberg’s response was neither the full-throated defense some might have hoped for nor a Booker-esque walk-back.

“I’m not sure they’re appropriate everyplace,” he said. “I can only tell you in New York, they provided parents with an alternative.”

Bloomberg chose to position his charter record as part of a broader effort to overhaul schools during his tenure. He said that based on math and reading test scores, 23 of the top 25 top schools in the state were from New York City when he left the mayor’s office in 2013, compared with zero when he started 12 years prior.

Nitpicky fact-check: The actual number was 22.

But the list of top schools is worthy of examination, and it raises issues that go beyond the typically binary stances that characterize the 2020 Democratic scrum.

Two of those schools were charters, both part of the much-lauded, oft-criticized Success Academy network. At least seven were selective gifted-and-talented schools, and three were specialized arts academies.

At the time Bloomberg took a “victory lap” of the 22 schools in 2013, The New York Times noted that many “were in well-to-do neighborhoods or were highly selective in their admissions,” including the Anderson School (tops in the state) and the Brooklyn School of Inquiry (No. 18).

Research on Bloomberg’s tenure in New York tends to give him high marks for his willingness to close failing schools but indicates that endemic segregation persisted through, and outlasted, his time in power. Current mayor Bill de Blasio has made that last point a centerpiece of his administration, proposing — but not yet implementing — a plan to overhaul the criteria for admitting students to elite schools, which traditionally have left out many black and Latino students.

The issue is national in scope. The Economist recently declared that “a battle over gifted education is brewing in America,” where whites are 80 percent more likely than blacks to be enrolled in accelerated programs. But thus far, the issues have largely proved to be too in the weeds, or perhaps too incendiary, for the Democratic field — even when de Blasio was briefly a part of it.

Back to Bloomberg’s 2013 victory lap: Seven of the schools that made it to the top-in-state list opened during his tenure, including three that, in the words of the Times, “hew to the administration’s goal of giving poor students more choice”: two Success Academy charter schools in the Bronx and Active Learning Elementary School in Queens.

The former mayor referred obliquely to that legacy during Tuesday’s debate.

“The only way to eradicate the poverty problem is to give people a good education,” he said. “Rather than just talk about it, in New York we actually did it.”

Disclosure: Bloomberg Philanthropies provides financial support to The 74. Co-founder and former CEO Romy Drucker, who sits on The 74’s Board of Directors, worked at the New York City Department of Education from 2007 to 2012 under then-Mayor Michael Bloomberg. She played no role in the reporting or editing of this article.