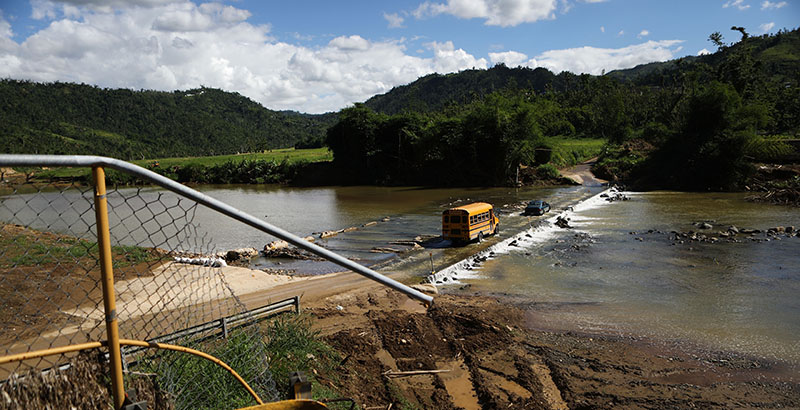 In the decade since Hurricane Katrina decimated much of New Orleans in 2005, education leaders in Louisiana overhauled the city’s education system to one run almost entirely by charter schools. New Orleans quickly became a prominent — and highly controversial — case study for education reforms that lean heavily on school choice. Even before children began returning to their classrooms, observers on the island started to ask: Is Puerto Rico next?

That answer started to come into focus Monday, when Puerto Rico Gov. Ricardo Rosselló announced new legislation that seeks a thorough, but comparatively modest, redesign of the public school system as the island confronts hurricane recovery efforts and a much older financial crisis that’s left the island’s bankrupt government with $123 billion in debt and pension obligations. The proposal — now in the hands of the island’s legislature —would introduce the education system to charter schools, private school vouchers, and a new funding formula. The proposal also gives educators a $1,500 annual salary increase and creates a “career ladder” for performance-based raises.

Unsurprisingly, that announcement drew quick praise from school-choice proponents, who commended Puerto Rican officials for offering families options, and admonition from teachers unions, who accused the governor of seeking to privatize education at the expense of Puerto Rico’s flailing public school system. Predicting the criticism, Puerto Rico’s education secretary, Julia Keleher, told The 74 that the government is not “looking to go crazy” but rather seeking reform at a more modest scale.

Although comparisons to New Orleans are perhaps inescapable, Paul Pastorek, the former Louisiana state superintendent who led reform efforts after Katrina, said Puerto Rico is actually more akin to Denver or Washington, D.C., where reform efforts have simultaneously focused on traditional public schools and charters. Pastorek, who has offered advice to Puerto Rico’s education leaders, said he was pleased to see the focus on decentralizing the island’s unitary Department of Education.

The island, he said, “can’t rely on just charter schools and vouchers to solve the problem.” Facilitating local decision making, he said, will help the traditional public schools improve. “That’s [what] most of their schools will be in the future — they’ll be traditional schools.”

The governor’s announcement comes at a moment of monumental change for Puerto Rico. Last year, the island closed nearly 200 schools, and last month the governor announced a fiscal plan that would shutter another 300 campuses and reduce education spending by $300 million. Although more than 25,000 students have left the island since Maria hit, that’s just one chunk of the diaspora. Since 2014, student enrollment in Puerto Rico has declined by 78,000 students, and by 2022 another 54,000 are expected to leave. In order to accommodate the loss of students, about 1,800 educators were told last week they’d be reassigned to new schools.

In a joint statement released Monday evening, union leaders from Puerto Rico and the U.S. mainland blasted the governor’s proposal as “misguided.” To recover from Hurricanes Irma and Maria last fall, the government “needs to invest in public schools to support and stabilize kids’ learning, not abandon and privatize schools,” said Randi Weingarten, president of the American Federation of Teachers, and Aida Díaz, president of the Asociación de Maestros de Puerto Rico, the local AFT affiliate.

Weingarten and Díaz put a spotlight on the voucher proposal, which, under the governor’s plan, would be implemented for the 2019–20 school year. Current voucher programs on the U.S. mainland, they said, have “benefited the few at the expense of the many.”

Sean Gill, a research analyst at the Center on Reinventing Public Education who studies district-charter collaboration, said he was “a little skeptical” that vouchers would entice quality school operators to the island.

While private schools that accept vouchers generally have fewer regulations, he added, “I would encourage Puerto Rico, if they really are serious about a voucher program, to make sure that they are looking to ensure there is a sufficient amount of accountability and not just say it’s solely the parent’s choice.”

Gill also said it was more apt to compare Puerto Rico’s strategy to that of cities like Denver that have “portfolio” districts with a range of school types, and Washington, D.C. Although Washington hasn’t suffered a catastrophic event, students there can attend traditional public schools, charter schools, or private schools through vouchers.

“There’s certainly been some questions lately about their graduation data [in D.C.], but if you look at other sources of data, there actually does seem to be a lot of progress that’s [been] made there,” Gill said.

Tulane University economics professor Douglas Harris, who has studied post-Katrina reform efforts extensively, urged educators eager to emulate New Orleans to use caution. His studies have shown positive gains for New Orleans schools after the hurricane, where “all of the stars were aligned for it to work,” he said. Contributing to the gains, he said, were increased education spending, the district’s poor performance before the storm, an accountability system that was quick to close low-performing schools, and the city’s ability to become an incubator for talent.

For Puerto Rico to measurably affect student performance, Harris said, it’ll all come down to implementation.

“How you do these things matters,” he said. “It’s not just the rough strategy that matters, it’s how you execute it.”

He added: “It’s not like there’s a playbook, either.”

Why One State Is Investing Millions Into ‘Academic Coaches’ for Students