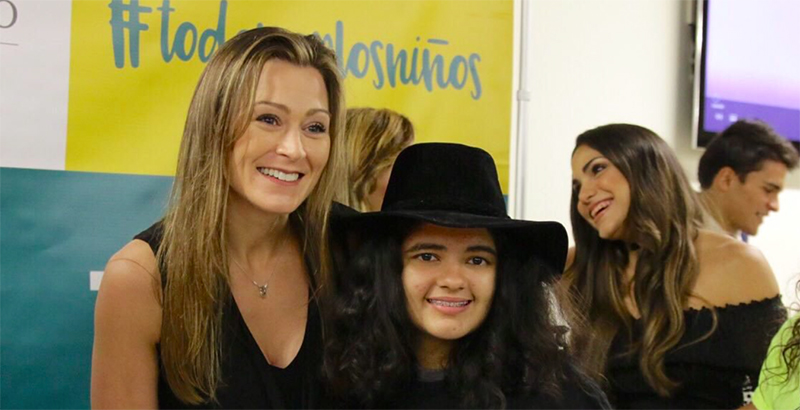 Buried beneath all the destruction from Hurricane Maria — classrooms ravaged beyond repair, a month or more of school closures, power outages and food shortages, pervasive student trauma — Julia Keleher sees an open window.

Puerto Rico’s public education system had floundered for years, and previous reform efforts had fallen flat, the fast-talking, upbeat education secretary said. But when Keleher took control of the system earlier this year, she promised to reshape an education department that she said was strained by bureaucratic inefficiencies, a tangled web that suffocated success.

In the midst of a $73 billion debt crisis that pushed the island into a form of bankruptcy and forced hundreds of school closures, Keleher — a former U.S. Department of Education official who has worked since 2007 to transform Puerto Rico’s schools — announced a plan to decentralize the island’s unitary education system. Dysfunction at the top, she said, had trickled all the way down to individual classrooms and to the pupils who filled them. Puerto Rico’s children have struggled to meet academic standards for years.

Keleher’s plans were stalled when the Category 4 storm ripped through Puerto Rico on Sept. 20, leaving the island’s 3.4 million people, including 347,000 students, with a humanitarian crisis that closed all 1,113 schools. Plunging forward on those efforts after the storm, she said, is more vital than ever.

“Of the things I need to worry about — the buildings, the poisoning from rats being around, the flooding, moving kids, transportation, sliding roads — the thing that worries me the most is that somehow I’m not going to deliver on this learning opportunity, this transformational opportunity for us to start to think fundamentally differently about what it is to be in school, and how one goes about getting an education,” Keleher told The 74.

Puerto Rico’s distress — and opportunity ­— has an obvious parallel. Before Hurricane Katrina wiped out New Orleans’s public school system in 2005, education in the city was “just very, very bad,” said attorney Paul Pastorek, who was Louisiana superintendent of education at the time. But the storm gave Pastorek and other Louisiana leaders a clean slate. Since the district was converted to charter schools more than a decade ago, student achievement has made marked gains, despite divisive politics that surrounded the transformation effort.

Sharing info on Katrina as a point of reference; we should not underestimate the damage or the opportunity to create new, better schools pic.twitter.com/Fmq59W4pKF

Unsurprisingly, Pastorek was among the education leaders Keleher contacted after Maria struck. Pastorek said he wanted to make one thing clear during their call about the island’s recovery efforts: It won’t be easy. Compared with New Orleans, he said, the storm damage to Puerto Rico’s schools is “definitely worse.”

“One of the things that I really wanted to share with her is the degree of difficulty that people have focusing on the problem and the solution because of the shock and because of the traumatic impact the whole experience creates,” Pastorek said. “It’s just very difficult to make things happen the way you would expect it to happen because this is a new normal. After a major disaster like this, you look for a new normal.”

Even as a majority of residents are still without power, the island’s public schools are slowly but surely rebounding. As of Monday, classes have resumed for about 40,000 children at 152 schools. While up to one-fifth of the island’s schools may never open again, Keleher is moving forward with an ambitious timeline: She aims to reopen schools on a rolling basis, with a majority of students back in classrooms by next week.

For that to happen, the U.S. Army Corps of Engineers has to inspect each school; they must be structurally sound, have running water, and be disinfected to reopen. Schools are operating on a shortened schedule, and — after a month or more without classes — the curriculum is being restructured to focus on core subjects. The academic calendar will be extended.

Addressing students’ emotional needs must also be a top priority for Puerto Rico teachers, said Frank Zenere, a school psychologist and head of the crisis management program at Miami-Dade County Public Schools, who has spent two decades responding to tragedy. Earlier this month, Zenere visited Puerto Rico, where he trained local educators in how to respond to a mental health crisis brewing among the island’s students.

One Day at a Time: How a Miami School Psychologist Helped Puerto Rico Educators Prepare for Student Trauma

“You’re talking about an island where, in the schools, 90 percent of the families they serve are of low socioeconomic backgrounds with limited resources to begin with,” Zenere said. “What we know well is, after a disaster, those that were struggling and underserved before are typically going to be the ones that are going to struggle and be underserved in the future.”

As thousands of students and teachers flee to the mainland, the Education Department has granted hardship waivers to educators, giving them until early January to return to their jobs.

“I don’t know how to describe how the department has been working with teachers,” said Aida Díaz, president of the 40,000-member Asociación de Maestros de Puerto Rico, the island’s American Federation of Teachers affiliate. “They have done everything that should have been done to make teachers feel safety and to not lose their hope and their enthusiasm for education. I think there has been the flexibility needed for us to start again and to continue doing our job.”

Puerto Rico’s students and educators had faced challenges for years before Maria struck. Last spring, the district shuttered nearly 200 campuses because of the financial crisis, a decision Díaz and her members protested. In June, the United Federation of Teachers published a report outlining teachers’ concerns about the closures, which the union said were done unnecessarily quickly and with inadequate planning.

But because many of the schools operated with few students before the storm, Keleher said, the district might shed several hundred more campuses. Between 2006 and 2015, more than 700,000 Puerto Ricans left the island, with a one-third decline in both the island’s and the district’s population. That trend is expected to skyrocket: In just the past month, tens of thousands of Puerto Ricans, including thousands of students, have left the island for the mainland.

The prospect of Puerto Rico following New Orleans’s lead and opening charter schools has Díaz and her members worried. The conversion there resulted in the layoffs of thousands of teachers. So the asociación has formed its own commission to help clean and rebuild damaged schools even as officials work to inspect and repair them.

“I’m concerned about that,” Díaz said. “This is why we are reopening the schools, this is why teachers are cleaning and rebuilding those schools. We don’t want anyone to come here and start doing charters here.”

Puerto Rico currently does not have any charter schools, and although Puerto Rican students are allowed to enroll in the schools of their choice, few specialized public school options exist.

But Keleher has indicated an interest in charters and other education reform strategies.

“There are a limited number of spaces in the specialized schools that we have,” she said. “I think from an equity point of view it is only appropriate that we allow for different types of learning programs and experiences for kids.”

Keleher is blunt about Puerto Rican students’ academic performance, which she called terrible. On standardized tests last year, fewer than half of students were proficient in Spanish, math, English, or science, and the island had a graduation rate of 75 percent last school year.

“The system has historically failed for decades, decades, failed to provide an equal opportunity, equal access to students so they can have an education so they would have some socioeconomic mobility,” she said. “My experience for 10 years of seeing this, I think, just positioned me well to come in and hit the ground running.”

The first step, which began even before Hurricane Maria, is a radical overhaul of the island’s education department. While reducing the bureaucratic burden and the overall administrative staff, she is breaking the department into seven regions with authority to make decisions locally. Under the previous system, Keleher said, the department had insufficient organizational structure and employees lacked defined responsibilities. That bureaucracy, she said, often left classes without materials they needed, like books, and some educators without professional development.

Keleher also plans to implement project-based learning in classrooms — the storm, she said, provided an opportunity for classwork to focus on recovery efforts. And, under the island’s plan for complying with the Every Student Succeeds Act, which was submitted to the federal government in September, she is focused on accountability, school improvement, and teacher effectiveness.

As Puerto Rico moves forward, Pastorek said, officials should look at reform efforts beyond New Orleans, including Washington, D.C., and Denver. Building local educator capacity should be at the top of the list, he said, since he doesn’t foresee a large influx of new teachers to the island. But most important of all, he said, is self-reflection.