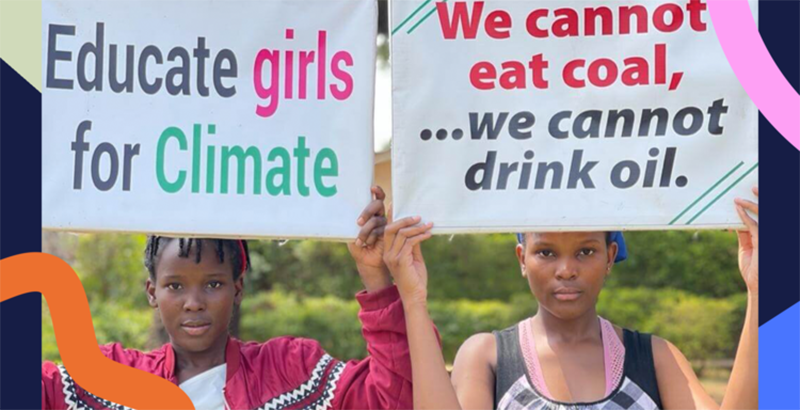 An “unprecedented” level of interest in girls’ education as a climate solution is growing worldwide, advocates say, as youth empowerment and gender are set to take center stage at the upcoming United Nations Climate Change Conference.

From Oct. 31 through Nov. 12, roughly 20,000 international leaders and climate advocates will gather in Glasgow, Scotland for the conference known as COP26. The next annual meeting is an opportunity to shape global climate priorities — during COP21, which took place in 2015, the landmark Paris Agreement was adopted to limit global warming.

This year’s conference is hosted by the United Kingdom, where climate and girls’ education has been prioritized over the last year. In 2021 the country led both the G7 and Global Partnership for Education Summit. In May, G7 countries reinforced political commitments for girls’ education, reaffirming that it’s a human right and setting two goals for the global community by 2026: 40 million more girls in school and 20 million more girls reading by age 10 or the end of primary school.

“There’s a lot of pressure on this COP to accelerate progress on the Paris Agreement and there will be some progress. However, I think the question will be: ‘is it enough?’” Naomi Nyamweya, a lead researcher with the Malala Fund, told The 74 by email. “Leaving girls behind undermines gender equality and governments’ ability to deliver on global climate priorities, including net zero.”

Climate crises will prevent an estimated 4 million girls in lower- and middle- income countries from accessing education in 2021, according to the Malala Fund. With current policy and emission trends, weather-related disruptions will prevent 12.5 million girls from finishing their education by 2025.

Quality, compulsory education for girls may equip more of the younger generation with tools to facilitate climate action, like literacy and critical thinking. And if climate curricula is prioritized alongside access to schools, young leaders can understand value in solutions that move beyond one-off, technical swaps to renewable energy, for example. Millions more can learn to assess climate threats and their root causes and support policies to curb poverty and environmental racism.

An analysis of countries with female political representation found that they are more likely to adopt stricter climate policies and have fewer carbon emissions. The findings further solidify arguments that investing in girls’ education and their pathways to leadership will yield positive outcomes for the earth.

Countries can also build stronger, low-carbon economies with more girls’ educated and entering the workforce. Particularly if their education includes, as advocates and youth activists hope, career and technical education for green jobs.

Climate change, and any possible solutions, are becoming harder to ignore.

While NDCs are not the “end-all-be-all” of climate policy, they are the most visible, guiding document for nations to support Paris Agreement goals, says researcher Christina Kwauk, who penned the report and is a nonresident fellow with the Brookings Institute.

If girls’ education continues to be omitted from the documents, she told The 74, the priority will likely be overlooked in subsequent policies, strategies and initiatives — like expanding career and vocational training for green jobs or leadership.

“Girls’ education is going to be collateral damage from climate change, if we’re not paying attention to it. From the research we know that investing in girls’ education can be a powerful climate solution, why aren’t we talking about these two hand in hand?” Kwauk said. “If our education system isn’t helping us to address those structural and systemic aspects of the climate crisis, we will have wasted some really valuable years.”

If quality girls’ education and reproductive health care are provided over the next 30 years, 85.4 gigatons (mass roughly equal to 16 billion elephants) of carbon dioxide emissions could be avoided, according to researchers with the international nonprofit Project Drawdown, who estimate the impact of particular climate solutions. That is over four times more impactful than increasing concentrated solar power in the same timeframe.

“Many stakeholders link girls’ education to reducing emissions, due to decreased fertility rates, however this places the burden of mitigating climate change on those least responsible for its cause and undermines a rights-based approach. We advocate for girls’ education as it is their right, and can equip them with the skills and knowledge to take climate action, adapt to impacts, be more resilient and engage in policy processes,” Plan International’s Jessica Cooke, a London-based expert in climate change and resilience programming, told The 74 via email.

Cooke will attend the U.N. conference this year with colleagues and youth activists to call for transformative education policy that advances both climate and gender justice.

“A gender-transformative education can equip girls with the skills and knowledge needed to tackle the climate crisis, claim and exercise their rights, and empower them to be leaders and decision-makers, including by challenging the systems and norms which reinforce gender, climate, racial and social injustices around the world,” Cooke added.

Roughly one third of girls don’t currently feel confident participating in climate policy processes, fewer boys feel the same hesitancy — about 25 percent, a recent Plan International youth survey revealed. And over 80 percent of youth surveyed in 37 nations, including the U.S., say that they don’t know anything about their country’s climate policy and that efforts to include them in decision making are insufficient.

More womens’ rights and feminist organizations are pushing for climate education policy as they begin to “see climate justice as a key aspect of work for gender equality,” said Bridget Burns, director of Women’s Environment & Development Organization. Her group partners with U.N. and government agencies as advisors on intersectional policy.

Similar thinking is underway at the U.S. federal level on the eve of the conference. At the National Ocean and Atmospheric Administration, Frank Niepold leads climate education efforts and holds a singular leadership role for the U.S. with the UN’s Action for Climate Empowerment. He served as a U.S. delegate to the 2015 climate conference.

Niepold told The 74 that he’s searching for ways to collaborate with other agencies to support girls’ education as a key climate strategy. The infrastructure for dialogue leaves something to be desired. Beyond the climate talks — which are focused on the national level — there is not an existing support system for international groups to collaborate with sub-national agencies like his, which implements policies to protect the environment.

“A gender equity focus on educational programming at the federal level — it is missing,” he said, but added, “I think it’s emerging.”

Niepold confirmed that education remains on the negotiating table for this year’s talks.

Many are closely watching to see what the U.S. prioritizes during and following the conference, especially given that President Biden’s key clean energy budget provision was just gutted after a key senator voiced opposition. The president originally planned to tout the move — to replace coal and gas power plants with wind, solar and nuclear energy sources — as an example of his country’s commitment to climate solutions and infrastructure.

In 2017, former President Trump pledged to drop out of the Paris accord; the U.S. was the first country in the world to formally withdraw in 2020. At the last in-person climate talks in 2019, delegates were in disarray over whether his re-election would further block meaningful climate action globally. President Biden has since made the current administration’s position on climate change clear, rejoining the agreement in February 2021.

“The U.S. has the potential of really being an international leader in this space,” she said. “We have the administration right now committed to climate issues, we have schools across the country who have been experiencing climate impacts. We have a real need … the time is really right for education to mobilize and start taking climate action.”