Williams: We Are Rightfully Moved by the Suffering of Immigrant Children Taken From Their Parents, but It Shouldn’t End There 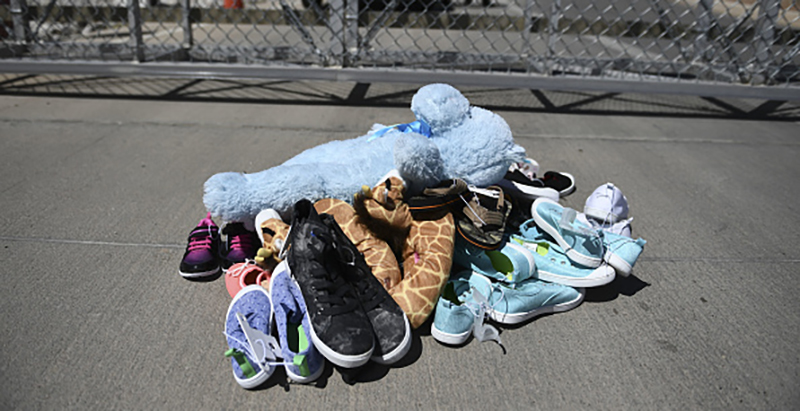 Shoes and toys for immigrant children are left at the Tornillo Port of Entry near El Paso, Texas on June 21, 2018 during a protest rally against the Trump administration's family separation policy. (Brendan Smialowski /AFP/Getty Images)

What’s the worst you’ve ever seen a child suffer?

I once helped soothe a boy in the hospital after he was run down by a careless driver. More than once, I’ve seen kids lose desperate, shattering battles against groups of bullies. I’ve seen my own children cry for breath through the fog of illness.

Our moral imaginations are built from the stuff of experience. How might sustained violence — and the fear of it — affect a child? How might she feel when fleeing her home through a journey of constant hardship and uncertainty? How, at the end of all this trauma, might she process being separated from her family?

If, like me, you’ve lived a life marked only by relatively moderate trauma, your best guesses will always be a projection out from the worst moments you’ve ever seen. That’s how we generate empathy, one of the noblest human abilities.

Thanks to the Trump administration’s fervor for punishing vulnerable immigrants — and Republicans’ general willingness to back the measures — the country has spent the bulk of the past year learning the limits of our collective ability to empathize. Critically, we’ve also learned the limits of righteous moral rhetoric.

Trump has repeatedly denigrated immigrants as a group. He’s stepped up immigration enforcement, including breaking up families taking their children to school. He ended programs granting legal U.S. status to people displaced by natural disasters in their home countries. He ended the Obama administration’s DACA program, which granted legal status to children brought to the United States without documentation.

‘The Unafraid’: With DACA’s Future Uncertain, New Film Offers Intimate Look at the Struggles of Undocumented Youth as They Fight to Attend College

Each of these cruelties was a test of our national ability to recognize, feel, and tolerate the pain we were causing children from immigrant families. And while each sparked widespread public condemnation — even some toothless scolding from House Speaker Paul Ryan — none have been reversed. Our national system of filtering public anger took the thousands of tweets, letters, phone calls, and protests … and left Trump’s policies in place (though the courts are fighting over DACA’s future).

These decisions — and subsequent inaction from congressional Republicans — cost young people their lives.

Then, finally, after almost 600 days of norm-busting, immigrant-threatening, corruption-laden “governing,” the Trump administration’s policy of separating immigrant children from their families at the U.S. border proved to be a step too far. On June 20, under fire from everyone from talk show hosts to church leaders to Republican officials (!!!), the Trump administration announced that it would cease separating families.

Is it real? It’s not yet entirely clear. The new order would allow the administration to detain families indefinitely, but it also threatens long-standing legal precedent. It’s going to take a while before we’ll know whether this new slapdash “policy” is actual, stable, and constitutional. Now Trump’s muddied the waters further, tweeting Sunday that he wants to do away with due process altogether and send immigrants at the border back to their countries without any kind of court proceeding.

Even if the latest policy changes are real … are they actually better for kids? Well, that’s the test of your empathy. Is indefinite detention of asylum-seeking families going to cause less suffering for children than the family separation policy? What a choice to make. Experts warn that the new executive order is laying the groundwork for an even less humane approach to immigration. Here in 2018, with this president and these congressional leaders, sure, it feels kind of like a victory. It’s as if we’ve spent a year watching the better angels of our nature wrestle with fear itself — and get steamrolled.

Of course it feels good to see cruelty stagger back, if only for a moment. Lots of us are desperate to feel some relief, to get a sense that the decent world isn’t collapsing and that some of the most egregious injustices against children are ending.

But it’s still striking that we got to government child-snatching before we hit a national empathy tripwire. It hints at something ugly: American politics and public policy don’t really make children’s health and development a priority.

See, punctuated outrages are not the only outrages against children. Ours is a country that tolerates high rates of child poverty, relative to other developed nations. It’s a country that refuses, simply refuses, to have a serious national conversation to meaningfully address police violence against children of color. That consigns low-income children to underfunded, segregated, ineffective schools — and shames them when their families struggle to pay for food.

No single person takes a low-income infant and, in a single, tragic moment, shoves him into any single part of our unfair system. No one violently snatches him away from a good school and locks him into a failing one. No. These are big pieces of our social and political structure. They’re inequities so comprehensive that they vanish from view. They’re the very air we breathe.

This isn’t some #WellActually contrarian posturing, where I proudly announce that the brutality of separating asylum-seeking parents from their (weary, vulnerable) children is precisely equivalent to a whole range of suffering. No. There’s a reason that this particular cruelty raised enormous opposition, even from a handful of Republicans.

But, see, I have also seen children suffer through months — soon to be years — of sustained hunger, chronic pollution, and abuse. I have seen slow and sturdy evils up close, and I know a little of how they grind the springs from children’s smiles, drain the joy from their present, and steal the hope from their future. I have been a teacher, a well-intentioned, hardworking one failing to forestall — let alone reverse — their decreasing trust in the basic goodness of others, their country, their lives.

Prominent pediatricians have warned that the trauma of family border separations might well be producing “toxic stress,” that is, traumatic experiences sufficient enough to damage children’s long-term health and development. The research base for these possible developmental links, though, wasn’t built in the past few news cycles. It’s grown out of research on how years of adversity affect children living in poverty here in the United States.

So: if you, like me, found yourself ratcheting between grief, frustration, and rage at the Trump administration’s treatment of families at the border, I’d first congratulate you. It’s no easy task to remain sensitive and empathetic amid the cynical toxicity of our present politics. You’re still human. You still care. But I’d also ask you to consider extending your laudable, righteous anger in the face of the myriad ways that the United States punishes and traumatizes children living in poverty today.