‘The Unafraid’: With DACA’s Future Uncertain, New Film Offers Intimate Look at the Struggles of Undocumented Youth as They Fight to Attend College 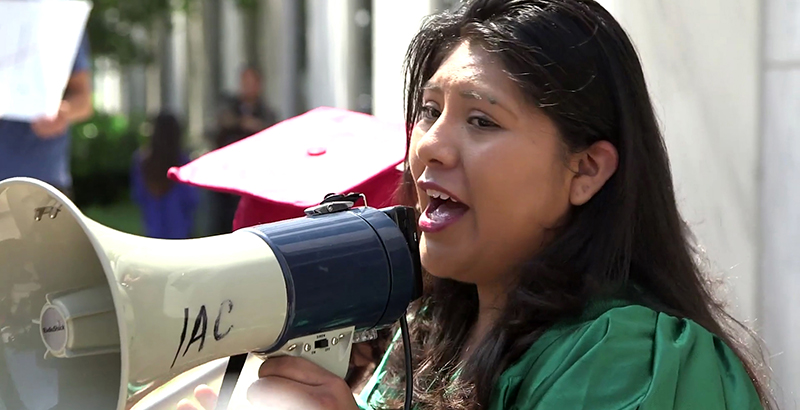 As the fate of Deferred Action for Childhood Arrivals recipients remains in balance, a new film offers a personal look at three Dreamers in their pursuit of higher education. The film, The Unafraid, highlights the lives of three students from Georgia, where undocumented students are barred from the state's top public universities and are ineligible for in-state tuition. (The Unafraid)

Since the Trump administration announced last year it would end a program that offers protections to undocumented immigrants who were brought to this country as children, their fate remains in limbo.

Amid the political gridlock in Washington over the Deferred Action for Childhood Arrivals program, Dreamers must keep pushing forward. Among them are the young undocumented students who, despite the odds being stacked against them, strive to receive a higher education.

In a new feature-length documentary, The Unafraid, filmmakers spent about four years following the lives of three Dreamers from Georgia — Alejandro, Silvia, and Aldo — as they fight for the chance to attend college. Across the country, undocumented immigrants are ineligible for federal financial aid, and in Georgia, they’re ineligible for in-state tuition and are barred from attending the state’s top public universities.

This Thursday evening, the 80-minute documentary will screen at the IFC Center in New York City as part of the Human Rights Watch Film Festival, an event featuring 15 films focused on human rights issues. A Q&A with the directors and the film’s subjects will follow the screening.

Directed and produced by Anayansi Prado and Heather Courtney, the documentary first premiered at North Carolina’s Full Frame Documentary Film Festival in April, where it received the Kathleen Bryan Edwards Award for Human Rights. This fall, the film will be screened in several states as part of the Southern Circuit Tour of Independent Filmmakers, said the directors, who are waiting to confirm broadcast opportunities.

The documentary, which was funded primarily by the Ford Foundation’s JustFilms, was released during a turbulent, uncertain time for the DACA program, but it doesn’t stop at policy. It was filmed in an observational style, cameras following the young adults from protests — chanting “Undocumented! Unafraid” — to intimate moments with their families. Viewers observe the students as they engage in immigration reform activism while struggling with the college application process, family finances, health issues, immigration enforcement, and cross-country moves.

Prado and Courtney met the students in 2013 and shadowed them through the 2016 presidential election, highlighting the fears the students face of losing their DACA status and being deported. In September, the Trump administration announced it would phase out the program. While lawmakers negotiate legislation to protect Dreamers, the Trump administration’s decision to end the DACA program is currently held up in the courts.

By the end of the documentary, Prado and Courtney said, they hope viewers leave the film feeling as though they know an undocumented young adult living in the American South.

“If people feel like they got to know someone at a personal level, then I think people are more likely to take some sort of action, even if it’s just sharing with their husband or kids or coworkers the story that they just saw,” Prado told The 74.

Prado and Courtney have each explored immigration issues in their previous film work. They met in 2003 during a shoot on the Immigrant Workers Freedom Ride, a nationwide tour to promote immigration reform. After they agreed to work together on a film, they settled quickly on DACA, which then-President Barack Obama created through executive order in 2012. Georgia became the central focus when they learned about a 2010 ban prohibiting undocumented students from enrolling in the state’s top public universities.

When Prado and Courtney met with DACA recipients to feature in their documentary, they intentionally sought students who transcended stereotypes. They connected with students without perfect grades, who have a slew of other responsibilities, Prado said. When they met Alejandro, for example, he was attending high school full time while working two jobs. The documentary also focuses on the students’ families, Courtney said, to show the sacrifices they made to give their children a better life.

“For me, it’s also about telling those stories and showing the need for, ultimately, comprehensive immigration reform, because our immigration system is not working and it’s not helping anybody by keeping their families [from] having to hide in the shadows,” she said.

Although the changing political climate has added relevance to the film, it also altered the final product. Initially, Prado and Courtney planned to shadow the students for a decade. Ahead of the presidential election, however, Prado and Courtney decided to wrap up the project, in part because the students’ stories had reached natural conclusions. By election night, they’d already finished filming. Then Donald Trump won.

“We called each other the night of the election and we were upset and crying and we said, ‘We have to go film tomorrow,’” Courtney said. “And we did.”