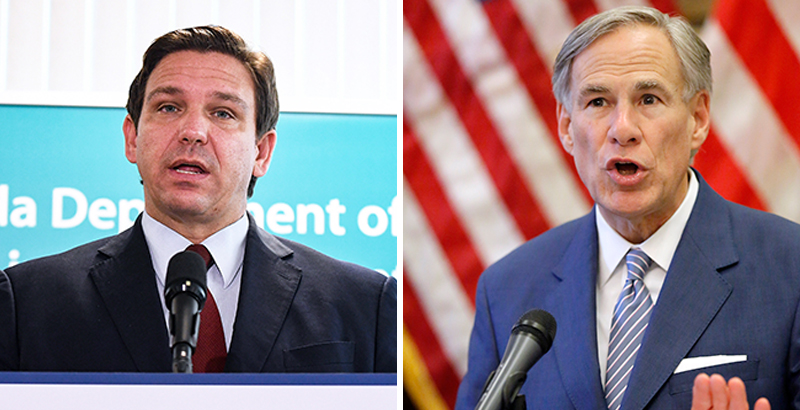 Whether they’re shrouding their policy preferences under “originalist” jurisprudence or mounting angry defenses of the Western intellectual tradition against perceived threats from Critical Race Theory, American conservatives are fond of framing their arguments in terms of a rigid code of fixed ideals.

They pride themselves on their allegiance to a moral code, a firm compass that distinguishes them from progressives who are always — allegedly — trying to erode the core principles that make America great.

Which is why it’s so tragicomic to witness conservative state leaders in Florida, Arkansas, Texas, Arizona, and beyond search for some shred of principled moral reasoning to justify their mandates forbidding school districts from requiring masks on their campuses.

It’s a tough task, since most of conservatives’ usual lines just don’t fit. They certainly can’t justify their actions in the name of American federalism and local control of schools. It’s hard to squash local school boards’ abilities to determine whether or not students and staff must wear masks … in the name of local control. In his government’s announcement determining the masking rules for every locale in his state, Texas Gov. Greg Abbott explained that “Texans, not government, should decide their best health practices.”

Nor can conservatives shield themselves in the name of protecting personal responsibility. If the last 18 months have taught Americans anything, it’s that the cautious also suffer when their feckless, carefree neighbors ignore the pandemic’s risks. Which, by the way, is also why they’ve shelved their “pro-life” rhetoric for this particular debate.

So conservative leaders have made a desperate grab for the banner of individual freedom. For instance, in his executive order limiting districts’ pandemic mitigation efforts, Florida Gov. Ron DeSantis insisted he was acting to “protect parents’ freedom to choose whether their children wear masks.” That is, masks can’t be required at school during a still-raging pandemic because that would disempower families from choosing what’s best for their children and, presumably, teachers from managing their own tolerance for risking infection.

But this is a profound distortion of America’s traditional approach to freedom. The Founders wrote comprehensively about how virtuous behavior and personal responsibility were fundamental to sustaining individual liberty. It was obvious to them that the stability of America’s limited, representative government rested upon individuals behaving responsibly. “Virtue or morality is a necessary spring of popular government,” George Washington wrote in his Farewell Address. And, when it’s politically convenient, modern conservatives know this. “Freedom relies on virtue for its survival,” announced a 2007 report from the conservative Heritage Foundation. Its authors continued: “It is virtuous citizens taking personal responsibility for their actions and exercising mutual responsibility for the welfare of others who make ordered liberty possible.”

In his towering 1859 essay, “On Liberty,” English philosopher John Stuart Mill, articulated his “harm principle,” one of that tradition’s famous definitions of individual freedom. “The only purpose for which power can be rightfully exercised over any member of a civilized community, against his will,” Mill wrote, “is to prevent harm to others.” The gist of the principle should be intuitive to most conservatives — indeed, to most Americans. It’s the intellectual ancestor of the old American saw: my freedom to swing my fist ends precisely at the point where it hits your nose.

In that vein, then, the case for curtailing families’ liberty to send their children unmasked hinges upon whether or not this will cause harm to others. This is not a complicated calculation.

To be sure, throughout the pandemic, it has been both tempting and fashionable to claim that the coronavirus is not particularly threatening for children. Further, advocates from across the political spectrum have made a series of cavalier claims about the relative safety of school settings. Last March, Brown University economist and prominent school reopening advocate Emily Oster wrote an article for The Atlantic under the headline, “Your Unvaccinated Kid Is Like a Vaccinated Grandma.” In his executive order Gov. DeSantis cited Oster’s research as proof that school masking was unnecessary.

However, much of the confident talk about the safety of school reopening comes from earlier moments in the pandemic when fewer children were being tested and attending in-person schooling. As in-person school reopening launches across the country, there is increasing evidence that children are more susceptible to catching the Delta variant than previous strains of the coronavirus. It’s driving higher numbers of cases among children, perhaps because those under the age of 12 are still not yet eligible to receive any of the coronavirus vaccines. There is some evidence that it increases the risk of hospitalization for people of all ages.

Data on the latest pandemic spike suggest that these concerns are warranted. Pediatric hospitals — particularly in hotspot communities in the South — are running out of beds. Test positivity rates for school-aged children appear to be increasing almost everywhere in the country. That is, more of the kids being tested for COVID are testing positive. The World Health Organization has set an overall 5 percent case positivity rate as the baseline threshold for when it is safe for governments to reopen in general. Perhaps we might tolerate a slightly higher rate for school reopenings, but Florida’s positivity rate for kids is four times the WHO’s benchmark: in that state, one in five children tested between Aug. 20 and Aug. 26 had COVID. Meanwhile, over 98 percent of Americans live in counties above the Centers for Disease Control and Prevention’s threshold for requiring universal indoor masking.

Finally, in elementary schools with universal masking and widespread COVID testing, the CDC estimates that nearly one-quarter of students will be infected in the first three months of school. Remove students’ masks, and their models suggest that nearly 80 percent of an elementary school’s students will be infected in the same time frame. These CDC models are looking gloomily prescient: as Georgia schools near the end of their first month since reopening, the state’s Department of Public Health reports that in-person schools are spreading the pandemic. Gwinnett County Public Schools, just outside Atlanta, is averaging enough cases per day to infect at least 20 percent of its students and staff by the end of the school year, and possibly more if case rates increase with colder weather — despite requiring masks at all times on campus.

In such an environment, at such a precarious moment for public health, the application of Mill’s harm principle is relatively straightforward. The new variant of the virus is already threatening the health of children and families, and it will threaten more if schools reopen without mitigation measures in place. Universal masking is just the simplest, easiest and cheapest of these. Political and education leaders are absolutely justified in taking all of the standard approaches to slowing the spread of the coronavirus — including mandatory masking, vaccine mandates and strict quarantine protocols for schools with new COVID cases.

Notably, as the Delta variant began taking hold of campuses around the country, even Prof. Oster tweeted a few caveats and Brown University took its page touting Gov. DeSantis’ citation of her research offline.

That conservatives are abandoning their prior moral convictions to explain their behavior makes clear that the whole effort to “protect the freedom” of the recklessly unmasked is really about scoring political points in a moment of enormous peril for children, families and the country. Indeed, in the face of school districts’ opposition to his executive order, conservative leaders in Florida are offering school vouchers to families determined to send their children to schools unmasked. Note, of course, that this extension of freedom, in the form of “empowering families,” doesn’t isolate the risks only to the private schools willing to tolerate these unmasked families’ choice. It simply provides the virus with more vectors to transmit, threatening everyone in Florida — and the rest of the country.

Worst of all, it’s not even the first time that conservatives have tried to use the virus as leverage for attacking public schools and educators. Last summer, then-Secretary of Education Betsy DeVos threatened to convert federal education funding into a school voucher system that would allow parents to enroll in private schools willing to open into the teeth of the fall/winter 2020 surge in COVID cases.

To be fair, modern conservatives’ brand of radical individualism is taken into account elsewhere in the Western intellectual canon. English philosopher Thomas Hobbes argued that this rugged freedom was something like humans’ natural state … each of us fending for ourselves and charting our own life courses. Famously, however, he warned that this was incompatible with civil society, for in this state of nature, life was “solitary, poor, nasty, brutish, and short.”

Dr. Conor P. Williams is a senior fellow at the Century Foundation, a progressive think tank. Find him on Twitter @ConorPWilliams. The views expressed here are his alone.