Why I’m Marching on Saturday: One HS Junior Reflects on How the Parkland Survivors Inspired Her and Her Classmates to Walk for Change 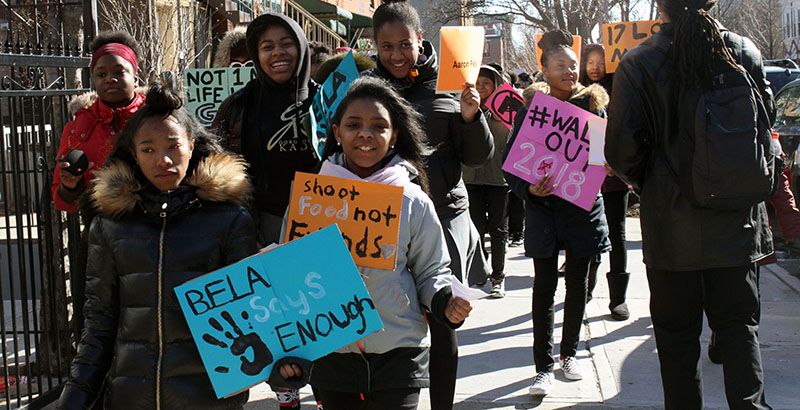 See our complete coverage of Saturday’s March For Our Lives:

—The inside view from Saturday’s march in Washington, D.C.

—Video exclusive: The students we met marching for their lives

—Portraits of protest: Photos from the streets of the nation’s capital

As a 16-year old black female living in a small, rural town in North Carolina, I often feel like my voice will never be heard. Looking out the bus window at peanut and cotton fields, I sometimes feel the history of oppression in my community makes it difficult to remember our tremendous collective strength.

Until this year, I had no idea that Ella Baker, the behind-the-scenes civil rights hero, was raised in the same county as me. And the power of her belief that “10,000 candles are more powerful than one spotlight” didn’t hit me until recently.

That all changed on Valentine’s Day. Watching the news on the couch with my mom, I witnessed the students from Marjory Stoneman Douglas High School stand up and fight against the injustice of gun laws and the fear of being killed in school that far too many of us face each day. Watching the students give interviews about their gruesome experience drew our attention, and we got more and more interested in the developing story.

Students like Emma González and Cameron Kasky were part of a great tragedy that will change their lives forever. However, instead of sitting back and waiting for the adults to fix it, they have taken it upon themselves to be the agents of change. They are using their voices to do everything possible to ensure that another innocent life is not taken away; that people with mental illness are treated with proper care; that stricter laws for purchasing guns are passed.

Watching these students — who are the same age as me — I’ve been especially inspired by their confidence and intellect. From the moment Emma held up her stack of AP Government notes before her “We Call BS” speech demanding more than “thoughts and prayers” from our political representatives, it was clear that these students hit the books hard.

What was also clear to me, though, is that while a degree of their power came from the intellectual respect they have earned, some of the media spotlight they have drawn can be attributed to their race and privileged class. So when Emma acknowledged this fact by inviting students from Chicago to her suburban home to discuss the issues they face in their own communities each day, I felt empowered again by her mission of inclusivity.

Those students look a lot more like me, and their voices had also never been heard. All of a sudden, it felt like I was one of the 10,000 candles shining light on an injustice that I can help remedy.

Inspired by my peers in Florida and in Chicago, I researched articles and watched an endless array of interviews. But I also knew that simply studying and learning wouldn’t be the same as fighting for change.

I reached out to my AP Language teacher, Mr. Noble, who encouraged me to take a lead role in the Young Activists Club and to organize a trip to Saturday’s March for Our Lives in Washington, D.C. This past Friday, instead of sitting at a desk as a student, I spent the day as a teacher, leading classes about the mission of the march.

I was able to educate my peers so they could see that standing up for something they believe in is powerful, and that using their knowledge and passion are the first steps to acting on the change. I collaborated with Mr. Noble to plan the key takeaways from the lesson and how to best inspire students to get involved. By showing videos and closely reading and analyzing the mission statement from #MarchForOurLives, they felt safe to ask questions about such a sensitive topic. This peer-to-peer atmosphere allowed us all to understand that we are not only students but world changers who are educated and passionate about issues that matter.

After the last class ended, students lingered in the room to ask follow-up questions about how they could get involved. In that moment, I felt the courage that I am capable of making change.

Then, carrying this momentum into the Young Activists Club, we established groups to take on the jobs of making posters for the march, recruiting students and chaperones, and organizing buses to get us to Washington.

The candles were shining bright because everyone was taking initiative to be part of a change that is bigger than a little rural town in North Carolina.

My generation is the generation that will be the next presidents, politicians, astronauts, and doctors. Saying we are too young is just an excuse, because we hold the key to the door of a brighter future. I feel empowered to not only be educated but also to use that knowledge for the greater good. We demand our voices to be heard! It is our time! #ENOUGH