Whitmire: With DACA in Danger at the Supreme Court, The Against-All-Odds Success of These Undocumented College Grads Deserves Its Own Hearing 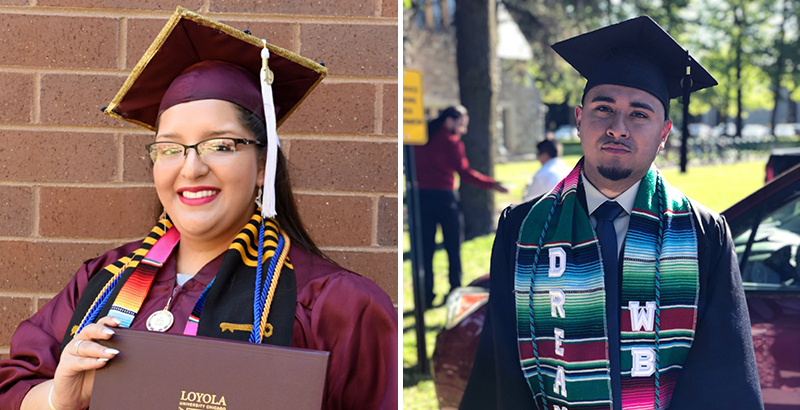 Berenice Sanchez and Manuel Cardoza, both recipients of Pritzker Access Scholarships for undocumented students, at their college graduations earlier this year. Sanchez graduated from Loyola University Chicago and Cardoza from St. Olaf College in Minnesota. (Sanchez and Cardoza)

Last week’s Supreme Court hearing on the fate of the Dreamers didn’t appear to go well for the roughly 700,000 young people brought to this country illegally when they were children and who now seem likely to lose their legal protections.

But in 2020, when the Supreme Court decision is revealed, the political equation changes. It won’t be lawyers arguing with lawyers inside the Supreme Court; it will be Dreamers and their personal stories pitted against immigration conservatives championed by President Donald Trump, who is counting on anti-immigration fervor to win him a second term.

Supreme Court’s Conservative Majority Appears to Back Trump Plan to End DACA, Potentially Putting Thousands of Students and Teachers at Risk of Deportation

That could be a tough political sell for the president. What voters will learn is that the Dreamers, young people such as Berenice Sanchez and Manual Cardoza, are accomplishing something remarkable — earning bachelor’s degrees at rates that match students from America’s top-earning families. That’s a story that needs a hearing.

Their results, given the hurdles these low-income, first-generation students face even enrolling in college — let alone paying for it without any federal scholarships — is a sign of both their determination and their character.

As someone who has spent two years researching what works, and doesn’t work, to ensure that low-income students not just enroll in college but walk away with degrees, this is an against-all-odds story, possibly the top education success story in the country.

Porterfield — Inside ‘The B.A. Breakthrough’: What an Inspiring New Book Reveals About America’s Growing Success in Propelling First-Generation Students to (and Through) College

The question becomes: Will all that go to waste if DACA (Deferred Action for Childhood Arrivals), which protects Dreamers with deportation relief and work permits, gets scuttled?

A Supreme Court decision allowing a Trump shutdown is less likely to lead to mass deportations than to renewed legislative attempts to settle the question. Even Trump has expressed sympathy for the Dreamers. At that time, the stories about young people such as Berenice and Manuel will become sharply relevant. How do we, as a country, propose to deal with this highly Americanized group of would-be citizens — citizens whose hunger for education is apparent?

Sanchez and Cardoza are both graduates of Noble Network charter schools in Chicago, where the network’s Pritzker Access Scholarships are available to many DACA graduates. These scholarships are designed to make up for the fact that DACA students cannot receive federal aid, such as Pell Grants, and are often denied in-state tuition for nearby state universities. The scholarships give students $12,000 a year (each student has to come up with an additional $2,000 each year on their own). One stipulation: The funding is good for only four years, a huge incentive to finish the degree on time.

Of the 57 Noble students who were part of the 2015 founding Pritzker Access grants, 60 percent earned bachelor’s degrees within four years. By May 2020, a total of 72 percent are projected to complete their degrees. For the class of 2016, the completion rate is expected to rise to 75 percent.

By comparison, only about 11 percent of low-income, first-generation students earn a bachelor’s degree within six years. And the national figures for undocumented students are even lower, said Aidé Acosta of Noble, who oversees the program — somewhere between 5 and 10 percent.

Why the high college success rate?

“We’re so motivated,” said Sanchez, 23. “Our parents brought us here for a better opportunity, so we worked double and triple to make our parents proud.”

Sanchez was a year old when her mother, who had fled Mexico (her father was abusive, she said), brought her and her younger sister to the United States. They settled in Chicago, where her mother thought the odds of finding work were high. To earn a living, she did temporary factory work and cleaned hotel rooms.

College always seemed like an impossible reach for Sanchez. Her father (through the Mexican consulate) refused to sign the DACA papers, so she couldn’t apply for DACA status until she turned 18. But when the Pritzker scholarships were announced, she applied and was accepted, winning a bachelor’s in 2019 from Loyola University Chicago in four years. Today, she’s a legal assistant at a law firm, making plans to go to law school.

Manuel Cardoza was nearly 2 years old when his family, seeking better job prospects, moved from Mexico to Chicago. At the time, Cardoza’s father was working in a shoe factory. Soon after arriving, his mother started waitressing, a job she still does today.

At Noble’s Rauner College Prep, Cardoza struggled at first, especially with the tight discipline — lots of detentions and one suspension having to do with suspected gang affiliation. “Then, in my sophomore year, I started to take college more seriously, thinking about my own image. I wanted to be the best. I knew my mother’s struggle was hard [his father had to stop working due to injuries] and I wanted to be the best student, the best son.”

In his junior year, he successfully applied for DACA status, but he remained unsure about college. Cardoza tells a story all the DACA students told — having to sit quietly in the back of the room while other students filled out financial aid forms — aid that he would never receive.

But when a counselor told him about the Pritzker scholarship, he applied and was accepted, landing at St. Olaf College in Minnesota, where he graduated in four years with double majors in sociology/anthropology and race/ethnic studies. Currently, he’s working as a teacher’s aide at Rauner College Prep, hoping to win a spot with Teach for America.

“Why have we been successful students? I took it very personally. A lot of people before us tried to get this opportunity and didn’t,” Cardoza said. “I saw it was a gift like nobody else would give to you.”

His mother, wary of traveling outside Chicago, dropped him off at his dorm for his freshman year and stayed no more than two hours, worried that she might encounter the police.

The next time she visited, for graduation in 2019, she stayed longer. “The fact that I was graduating from college was a greater feeling than being scared. It made her feel like all her sacrifices had paid off.”

The high graduation rate for these students is not a given. Aside from the problem of financing an education, there are inevitable personal challenges. One example: Often, these DACA students are the only family members able to hold a driver’s license, so when they leave to go away to college, the families struggle.

Plus, these students are limited in the fields in which they can work. Depending on the state, professions that require professional licensure, such as doctors, nurses and lawyers, are off limits.

The larger scholarship program for Dreamers is TheDream.US (5,427 total scholarships, compared with 299 for the Pritzker program), and college persistence rates there match the Pritzker success rates. There are two reasons for that, said Candy Marshall, president of TheDream.US.

“Some of it is simply the resilience and persistence of these students. They know their parents gave up everything to get them to this country, so carry an incredible sense of personal responsibility to get a college education and give back.”

The second reason comes from a survey of Dreamers at CUNY (City University of New York) campuses, which are educating nearly 900 of the TheDream.US students. The students cite the on-campus scholar advisers who help them navigate both personal and academic life and also the support they get by being in college with other Dreamers.

“The beautiful thing,” Marshall said, “is how they provide peer-to-peer support.”

The Pritzker scholars also receive additional support, such as monitoring with on-campus meetings to keep them on track to earn a degree in four years.

“They struggle like any first-generation students,” said Acosta, “with homesickness, the ability to integrate into a predominantly white institution and the ability to find a sense of belonging.”

The B.A. Breakthrough: A First-Generation Student Talks About Her Challenges

The academic challenges involve time management, especially in making the transition from their highly structured academic life at Noble to an unstructured campus life.

“The first year is the hardest,” said Acosta.

Depending on what happens with DACA, the hardest years for these young college graduates may be yet to come.

Correction: The Pritzker Access Scholarship recipients must contribute $2,000 a year toward their college education. An earlier version of this story had an incorrect amount.