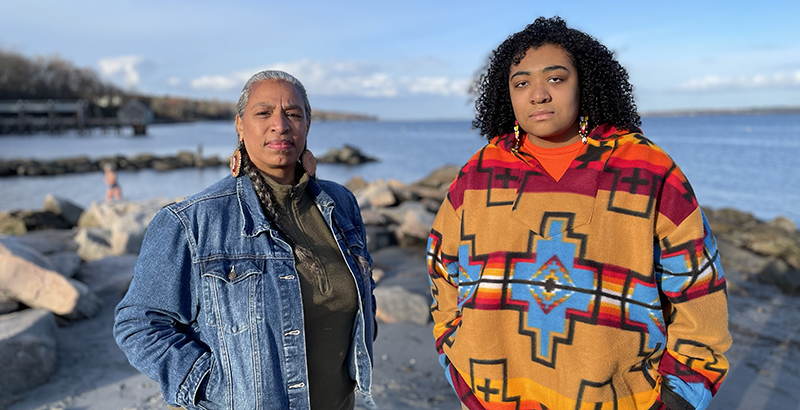 Chrystal Baker and her daughter Nittaunis on the water at the University of Rhode Island’s bay campus, where the 19-year old studies marine biology. (Asher Lehrer-Small)

Growing up in Charlestown, Rhode Island, Chrystal Baker remembers reading a textbook in history class that said the Narragansett Indigenous people, who have lived in southern New England for tens of thousands of years, were extinct.

“We’re not extinct,” the young student ventured, nervous about contradicting the lesson, but feeling she had to speak up. “I’m a Narragansett.”

No response came from her teacher or classmates, recalls the Chariho Regional School District alum, who graduated in 1986.

“It just didn’t matter,” she told The 74. “You were insignificant.”

Now, decades later, Baker has two children in the same school system who have navigated similar experiences of hurt and invisibility. Sometimes, the racism has been overt, like when a classmate muttered the N-word at her daughter in middle school. But more often, it comes in the form of quiet erasure and inaccurate tropes.

“In history class, it’s mostly the history of the colonizers,” said her daughter Nittaunis Baker, 19, who graduated from Chariho High School in spring 2021 and now attends the University of Rhode Island.

“We didn’t really talk about Native people that much,” she told The 74.

Even now, as the topic of how to teach U.S. history in schools is receiving an unprecedented level of public attention, Indigenous parents say the debates still largely exclude lessons on Native people.

“It’s [been] very Black/white centric,” said Samantha Cullen-Fry, a member of the Narragansett Indian Tribe who has two young children in the West Warwick School District. She agrees that highlighting the Black experience is important, especially in wake of the police murder of George Floyd. But efforts to diversify K-12 curricula are incomplete, she says, if they fail to accurately teach about Native people.

When English colonists first came to New England in the 17th century, the Narragansett people had been living in the region for some 30,000 years — making the vast majority of North American history, chronologically speaking, Indigenous history. In the following centuries, Native people have continued to live in the region.

“There is no United States history, there is no Rhode Island history, without Indigenous history,” the West Warwick mother told The 74.

Across the country, fights over critical race theory have elevated conversations over social studies curricula to the central stage in many school boards and state legislatures. CRT is not an ideology, but rather a scholarly framework that views racism and inequality as ingrained in law and society. Still, in Oklahoma, a bill to restrict its teaching led to the removal of classic books such as To Kill a Mockingbird and Raisin in the Sun from reading lists, according to a recent ACLU lawsuit. In Texas, the crackdown prompted a school administrator to call for an “opposing” perspective on the Holocaust.

The Ocean State has emerged as a hotbed for the controversy. Over the summer, a South Kingstown mother made national headlines for filing more than 200 public record requests investigating if the district taught terms like “systemic racism,” “white privilege” or the “1619 Project.” Education writer Erika Sanzi, a former Rhode Island teacher and school board member, has become a national spokesperson opposing CRT and other curricular changes her group, Parents Defending Education, see as divisive.

And although Rhode Island was not one of the dozen states to enact laws restricting teaching on race and gender, a bill to do so was introduced by state legislators in spring 2021, though it failed to pass.

Its author, Rep. Patricia Morgan, did not respond to questions from The 74 asking whether topics such as the 1675 Great Swamp Massacre, which took place just miles outside the Chariho school system’s present day boundaries, would be among the “divisive concepts” that the bill sought to ban. In the event, 1,000 English colonial soldiers, joined by about 150 Pequot and Mohegan soldiers, attacked and burned a Narragansett stronghold, killing hundreds, including women and children. In late October, the Rhode Island Historical Society transferred the 5-acre South Kingstown site back to the Narragansett Indian Tribe, nearly three and half centuries after the deadly event.

In Chariho schools, where more than 9 in 10 students are white, alumni of the district who are Indigenous and graduated in recent decades have recounted experiences of being steered away from college by their counselors. In nearby Narragansett Regional School District, Cullen-Fry had to spend a post-grad year doing unnecessary pre-college work, she said, because her counselor did not send in her paperwork, assuming she couldn’t afford higher education. The experience, she learned later at a high school reunion, was shared by numerous peers of color.

Chariho Assistant Superintendent Michael Comella said he was not aware of Indigenous students having had issues with the district’s college counselors in the past, but mentioned that the school system is working with local Narragansett leaders to improve school policy and providing professional development sessions on equity and inclusion for teachers. He said teachers typically cover the Great Swamp Massacre in fifth grade during lessons on King Philip’s War.

“The district remains committed to ensur[ing] that we account for all important information and history as it relates to our tribal community,” he wrote in an email to The 74.

Though there is much more work to do, the elder Baker appreciates that the Chariho district has made some efforts to better serve its Native students. The high school has a Native American student advocate on staff and, recently, has begun engaging in conversations with Indigenous parents about further improvements.

“This isn’t about bashing the Chariho school district,” she said. “This is about recognizing that there are issues that have affected past and present generations of Indigenous students who have attended this school system and they need to be addressed on behalf of present and future generations.”

Chariho has formed an anti-racism task force that has been meeting since the fall of 2020 in pursuit of more equitable school policies, practices and curricula. Some residents, such as the Bakers, say that the changes are sorely needed, but others staunchly oppose them.

“I do not support, at this point, the anti-racism task force,” audience member Jim Sullivan said during public comment at a Nov. 9 school committee meeting. “I am concerned about their bringing racism into the Chariho system.”

“We are not domestic terrorists,” he added, referencing escalating tensions nationwide at board meetings that recently prompted the National School Boards Association to send a letter to the White House requesting increased support and security.

The pushback does not phase endawnis Spears, who recently joined the Chariho School Committee after a member’s resignation. Spears, who does not capitalize her first name, is a member of the Navajo Nation, with ties also to the Chocktaw, Chickasaw and Ojibwe people. Diverse perspectives, she believes, are necessary to the development of all children.

“I want to ensure that teachers have everything they need to prepare their students — all of their students — to be able to navigate citizenship in the United States,” she told The 74. “That includes Indigenous histories.”

“The lack of nuance around Indigenous histories also is a form of erasure,” she added. “It continues the process of erasing Native people from this landscape.”

“I think it’s been very teacher-by-teacher, the improvement, rather than the system of education improving,” she said on a recent episode of the Boston Globe’s Rhode Island Report podcast. “I would like to see, you know, the Department of Education really take an active role in ensuring that the history is inclusive and includes Native people.”

State social studies standards do not stipulate that schools teach specific aspects of Native history or culture, said the Rhode Island Department of Education, instead leaving those decisions up to districts.

“If materials [that districts] use presently from a publisher do not adequately address Indigenous representation, [the state education department] would strongly encourage school leaders to develop materials they can use to meet the standards,” Communications Director Victor Morente wrote in an email to The 74.

Accurately representing Native Rhode Islanders means addressing certain truths that may be difficult, said the younger Baker. But covering those facts in schools, rather than mythologized narratives of harmony between colonists and Native people, doesn’t mean placing blame on any students, she said.

“The establishment of this country was pretty much the murder of a lot of Indigenous people, including my ancestors,” she said. “I don’t think that [white] kids should feel ashamed because it’s not really them. It’s their ancestors.”

It’s only shameful when students shy away from those histories, she believes. “If they refuse to acknowledge that that happened, then you kind of become complicit in not recognizing the struggles that [Indigenous] people went through.”

In school, the only time she remembers a lesson on Indigenous people was a brief mention in fifth grade around Thanksgiving. She doesn’t recall any lessons on the Great Swamp Massacre. Additionally, in high school, outside of class, she had a teacher who held a reading group focused on Native sciences, which discussed Braiding Sweetgrass, a book written by a member of the Potawatomi Nation. She enjoyed the experience, and wishes there could be official courses devoted to such topics.

“Even having a class just on the history of Indigenous peoples, like how they have classes on ancient Greek and Roman things, that would be really cool,” said the college freshman, who is studying marine biology. She receives free tuition at URI thanks to her status as a member of the Narragansett Indian Tribe.

Teachers can cater Indigenous history and culture to learners of any age, said Cullen-Fry, who works as an educator at the Tomaquag Museum. For example, many classes visit the museum in November, Native American Heritage Month. She corrects the youngsters’ misconceptions about Thanksgiving, teaching them that it’s traditional in many Indigenous cultures to celebrate 13 Thanksgivings, one for each of the year’s moon cycles.

States such as Oregon have moved in recent years to require that schools teach lessons on Native history and culture, and to bring tribal educators into the state’s teaching force.

But until such shifts, large and small, are incorporated into Rhode Island schools, the Baker family will celebrate progress on a more personal level.

When Nittaunis walked across the graduation stage in May 2021, she was adorned with tribal jewelry and ornamentation, passed down from her ancestors. Her mother, after so many of her own personal experiences of feeling that her Indigenous identity was erased by the world around her, wanted people to know: Another Indigenous child just graduated from Chariho High School.

The proud message was simple.

“Society doesn’t think that we’re here,” the elder Baker said. “We are here.”