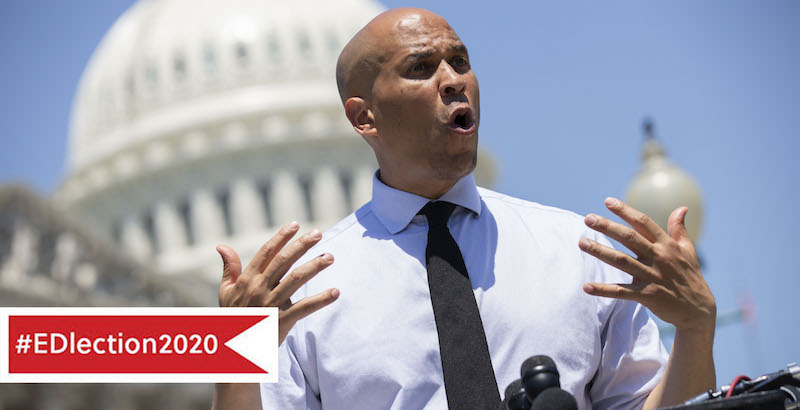 A version of this essay originally appeared on the NJ Left Behind blog.

I gasped as I opened the op-ed section of The New York Times and read Sen. Cory Booker’s column repudiating his regressive stance on public charter schools. Until he entered the Democratic presidential nominating contest, Booker was one of the nation’s most eloquent supporters for school choice, with his hometown of Newark the proof point for the impact of a high-quality charter sector on a struggling school system. But when he entered the primary, he hopped on the Bernie Sanders/Elizabeth Warren anti-choice wagon, dissolving into a vegan mush of (un)progressive platitudes. Something’s changed. He wrote:

“[I]t is largely up to Democrats — especially those of us in this presidential primary race — to have a better discussion about practical K-12 solutions to ensure that every child in our country can go to a great public school. That discussion needs to include high-achieving public charter schools when local communities call for them.

“Many public charter schools have proved to be an effective, targeted tool to give children with few other options a chance to succeed.”

My reaction to this (laudable) about-face swung from “finally Booker is owning the remarkable upswing in student achievement in Newark, largely due to the impact of its best-in-the-nation sector of charter schools (like I told him to!)” to “why the hell did he wait till now to call out the other candidates on their union-pandering opposition” to “boy, was he poorly advised” when, responding to a question about charter schools at a presidential candidate forum sponsored by AFSCME, he said, “We’re seeing an assault on education that is outrageous and unacceptable.”

So what’s the real deal? What persuaded Booker to own his educational legacy in Newark, one that has transformed one of the worst school districts to the No. 1 city in America for “beat the odds” high-poverty, high-performance schools by the Center on Reinventing Public Education?

● Booker doesn’t have a snowball’s chance in hell of winning the nomination. So maybe he’s reconsidering his decision to align himself with front-runners Sanders/Warren (Joe Biden’s far less strident) who disavow schools that the majority of black and brown families support.

● When he commutes back to Newark, the increasing numbers of pro-choice residents (in April, the winners of the school board race were charter supporters, one even endorsed by former charter hater Mayor Ras Baraka) get in his face. Newarkers are not shy: They speak truth to power. Maybe he listened.

● Maybe he’s noted the new GoFundMe campaign led by a powerful coalition of black and Latino parents and education advocates from around the country, who are raising money for a trip to meet with Warren to share how her recently unveiled anti-charter education plan gets it all wrong for children of color.

● Maybe he’s aware of the backlash against New Jersey Gov. Phil Murphy, who, with the cooperation of Education Commissioner Lamont Repollet, has instituted a charter school moratorium despite the 35,000 children on charter waiting lists.

● Maybe he realizes that, despite his best efforts to erase a legacy he should highlight, teachers unions are never going to support him. Example: Diane Ravitch’s Network for Public Education (an echo chamber for the National Education Association and American Federation of Teachers) gives him an “F” for his stance on charter schools. (Warren gets an “A+,” despite her previous support for school choice; Sanders gets an “A”; and Biden gets a “B-” because he’s associated with that radical privatizer Barack Obama.)

● Speaking of President Obama, last week my hero struck back at the “woke” culture, this “idea of purity and you’re never comprised.” The world, he told young people at a forum, is “messy; there are ambiguities. … People who you are fighting may love their kids and share certain things with you. … That’s not activism. That’s not bringing about change.” So maybe Obama’s wisdom ignited Booker’s epiphany that Dems damage both their brand and their chances of ousting Donald Trump from the White House by aping his “us vs. them” rhetoric. (Yes, mein kinder, I’ve already seen Hannah’s “OK Boomer” T-shirt.)

● Maybe he’s watched Warren reverse her support for charters and public school accountability and realized that, as the Washington Post says, such a platform “is a plan for serving adult interests and not student needs.” Maybe he’s watched Sanders, as Amy Wilkins says, “tell black parents, who overwhelmingly support charters, that they can’t send their kids to charters anymore.” Maybe the role of Faust doesn’t suit him as well as it does other Democratic hopefuls.

● Maybe he’s actually listening to parents of color, who, according to a 2019 poll by the Benenson Strategy Group, “are the strongest supporters of charter schools, because charter schools are finally making a free, high-quality education available in neighborhoods that were shamefully neglected by the education establishment.” Hey, maybe he had a campaign operative at this past summer’s NJ Parent Summit who heard Nicole Harris tell me, “Parents need options. It is our right as parents to choose the strongest schools in our community for each of our children.” And who heard Troy Still tell me, “When I was growing up, I lost so many friends to the gangs and the streets. Our kids have got a chance now.” And who heard Tafshier Cosby tell me, “Teachers are there to teach, right? It’s up to parents to make sure our children are having the best possible educational experience.” Or Ruthven Haneef Auguste, who told me (of his daughter with disabilities at KIPP), “I know that if she were in a different school, she would get into trouble less, but she’d also learn less because the bar is so low.” Or Shayvonne Anderson (a Newark school board member), who told me, “This isn’t about adults and their politics. It’s about our children.”

Here’s the thing: When Sanders/Warren get up there and talk dirt about charter schools in order to endear themselves to union lobbyists, they are distinctly unwoke. They are painting over the messiness and ambiguities of public education to satisfy adults. They are turning their backs on a growing segment of the Democratic Party that supports school choice. They are, as Chris Stewart says, genuflecting “to the public relations departments of America’s national teachers unions.”

They are proposing policies that will damage the futures of children who live in cities like Newark and Los Angeles and Chicago and Boston and Philadelphia.

Analysis: Cory Booker Could Have Run Away From School Reform. Instead, He’s Doubling Down on Newark’s Education Revival. That’s a Smart Move

This doesn’t seem very “progressive” to me, or Democratic. In fact, it seems akin to the Trumpian “build that wall” canard that provokes applause from the unwoke.

We should be better than that.

“The Democratic Party is at its best when we lead with the conviction, above all else, to help people. We fall short of that when we race to embrace poll-tested positions that may help us avoid being yelled at on the internet by an unrepresentative few but don’t reflect the impossible choices many low-income families face.”

We’re not at our best right now, union endorsements aside. It’s too late for Booker, but I’d like to imagine that if he had stuck to his authentic education platform from the start, he’d be closer to the center of the stage. Perhaps the winner will have the smarts to be the true progressive who does more than pay lip service to our most disenfranchised Americans (maybe with Booker as VP?).