Stewart: Elizabeth Warren’s Education Plan Is Exactly What We Need — If Our Goal Is to Make the Achievement Gap Permanent 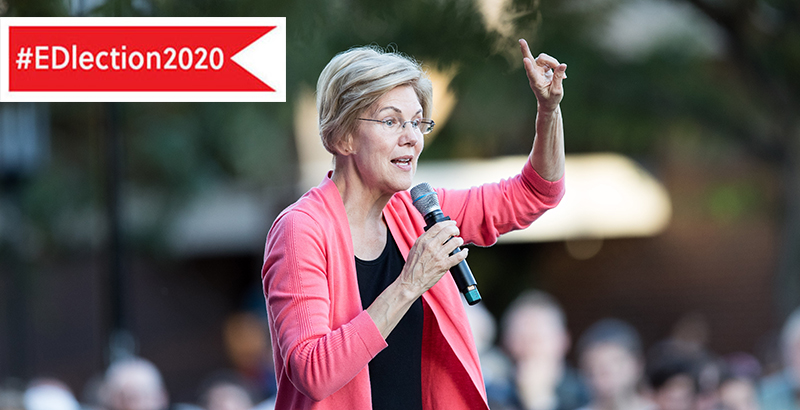 Elizabeth Warren’s new education plan is a cut-and-paste genuflect to the public relations departments of America’s national teachers unions. They have long lusted for a colossal increase in education spending, and the senator from Massachusetts has proposed “quadrupling Title I funding” to $450 billion in new money — as well as other goodies.

Finally, a Democratic presidential candidate brave enough to focus less on classroom instruction and more on factors outside of schools; a candidate informed enough to know there is nothing wrong with teaching and learning that won’t be fixed by big-budget infrastructure upgrades along with housing grants and health care.

For unions, this must feel like Christmas. For Democratic school reformers, Pearl Harbor.

Especially since Warren’s fiscal generosity ends where reform begins. Her plan would end the federal Charter School Program, a source of support for charter school expansion. It’s a baffling choice, given the popularity of charters with parents of color and Democrats; they often have waiting lists to get in and they provide urban students with an opportunity to learn at higher levels than neighboring district schools.

I’ll never understand how a plan to limit choices for families living in low-opportunity education deserts is a winner in a political campaign. Further, why would any leader attack annual testing that produces the data that civil rights groups use to illustrate the disparities disadvantaging students?

I’ll stop here and admit that Warren does present something of a solution: She wants to balloon taxpayer support for “sustainable community schools,” an old idea cynically renewed by the American Federation of Teachers and the Annenberg Institute for School Reform, which have strategically proposed these feel-good district schools as an alternative to charters.

Warren’s plan states, “Studies show that every dollar invested in community schools generates up to $15 in economic return to the community,” and to prove it she links to an article in neaToday, a National Education Association publication. That article elevates as a model the Milwaukee’s Community Schools Partnership, a United Way-backed project to develop community schools, but looking at their schools raises questions.

For example, there’s Auer Avenue Community School, where fewer than 5 percent of students are proficient in math or reading; Hopkins Lloyd Community School which scores 7.6 points out of 50 in English and 5.9 out of 50 in mathematics; and Browning Elementary, which gets one star (out of five) from the Wisconsin Department of Public Instruction because it “fails to meet expectations.” And, ironically for Warren, who bemoans segregation, these schools she touts are not just separate and unequal, they’re hypersegregated (for example, Browning Elementary is over 95 percent “economically disadvantaged”).

The senator wants to invest $100 billion to scale up those dubious successes nationwide while cutting aid to charter schools (like those in her home state, which are celebrated for outperforming district schools in nearly every measure).

Am I surprised that politics is doing its thing here? No. But I am disappointed that we’ve drifted this far from a moral center in public education. I’ve always assumed Warren was one of the straight shooters, a firebrand for the people, but I’ve missed the signs that it wasn’t so.

She was Native American before she wasn’t.

All slights aside, the thing that really matters is that students do better. That children learn and grow intellectually. That they acquire the world of information that will help them succeed in their jobs and in life. If Warren’s plan to inject money and reduce accountability and choice is the road to get there, I’ll be satisfied when I see the outcomes.

But I doubt it will happen. I predict her plan will let the education system off the hook for results, there will be no usable data to expose racial inequities and happy, college-educated adults in public schools will lord over children facing diminished futures.