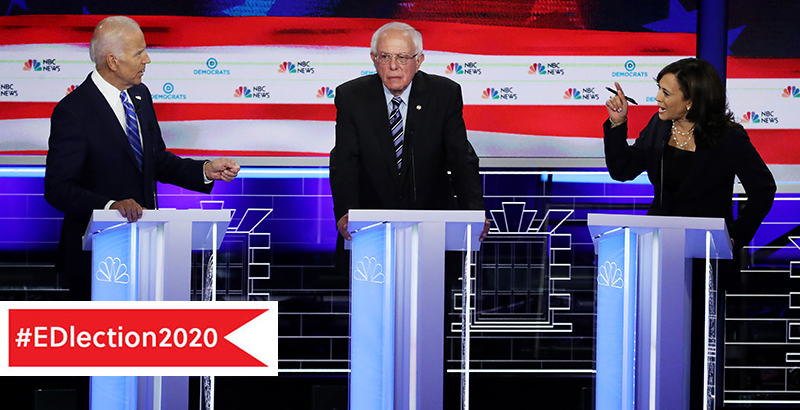 Education policy is about so much more than just curriculum, budgets and teacher pay. As any education reporter or advocate can tell you, it’s about economics, technology, civil rights, gun control, immigration and a hundred other things.

Given that connection, it’s perhaps not a surprise that discussion of K-12 in the first Democratic presidential debates touched on the larger canvas of education issues.

“You also worked with them to oppose busing,” Harris said of Biden’s comments touting his ability to work with segregationist senators. “And you know, there was a little girl in California who was part of the second class to integrate her public schools, and she was bused to school every day — and that little girl was me.”

There was a little girl in California who was bussed to school. That little girl was me. #DemDebate pic.twitter.com/XKm2xP1MDH

Biden said Harris’s comments were a “mischaracterization of my position across the board.” Regarding busing, he specifically opposed “busing ordered by the Department of Education,” Biden added. (Those views were in line with public opinion on school integration both at the time and now, The Washington Post reported.)

Earlier in the evening, Biden also invoked K-12 education when challenged on his age, as part of a broader question on the future of work in an era of increased automation.

Most people will need additional education beyond high school, and community college should also be free, he said. College costs did come up several times in both nights of the debate, with candidates generally divided between those who support four years of free tuition and those, like Biden, who support two free years of community college.

Biden’s mention of Title I wasn’t the only education mention that would’ve sent the average viewer to Google.

On Wednesday, TV audiences heard a term that isn’t widely known outside education circles, this time as part of a discussion on gun control and school safety.

Rep. Tim Ryan of Ohio focused on social-emotional learning, an issue he’s long pursued, but one that’s perhaps a little esoteric to the debate’s typical audience.

And in a nod to the younger voters who will be crucial for Democrats, several candidates also recognized the work of student activists working on gun control issues in the wake of the Parkland, Florida, shooting.