The 74 Interview: Parkland Teacher, Filmmaker Talk New HBO Documentary on the Shooting, Its Aftermath, and the Musical That ‘Must Go On’ 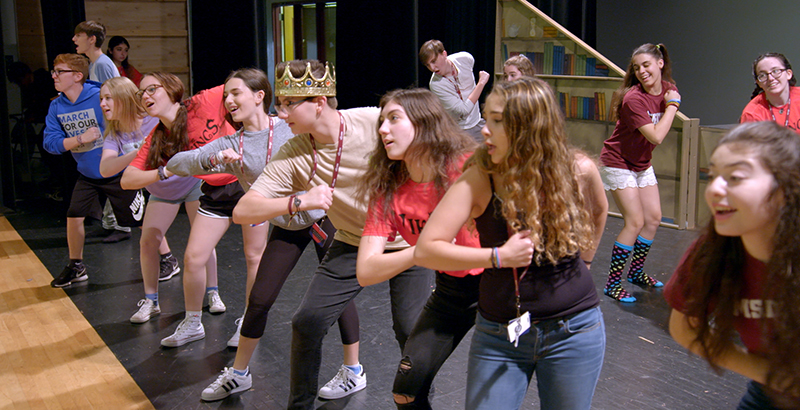 “Song of Parkland,” a documentary that debuts Thursday evening on HBO, features Marjory Stoneman Douglas High School students and drama teacher Melody Herzfeld as they move forward to perform a children’s musical after the mass school shooting in February 2018. (HBO)

See previous 74 interviews: Criminologist Nadine Connell on the data on school shootings, Teacher of the Year Nate Bowling on the push to arm educators, and more. The full archive is right here.

Drama students at Marjory Stoneman Douglas High School were in the middle of rehearsal when the shooting began. With a “code red” blaring over the intercom, drama teacher Melody Herzfeld and her students sought shelter in a nearby storage closet.

The February 2018 shooting in Parkland left 17 dead and prompted a nationwide movement to demand action. For students in Herzfeld’s drama class, it became a reason to perform.

Song of Parkland, a new short documentary that debuts this Thursday on HBO, offers an inspiring glimpse into the lives of Herzfeld and her students as they coped with trauma to perform in a children’s musical two months after the shooting. From rehearsals to opening night to a special performance at the Tony Awards, the film, directed and produced by Emmy winner Amy Schatz, offers a simple theme: the value of perseverance.

“You always hear ‘The show must go on,’ and I think that was all really tough for us to have to deal with at first,” Parkland student Alex Wind said in the documentary, which debuts a year after the tragedy. “But when we all came back to school, we all knew what we needed to do.”

When the shooting unfolded, the drama students were rehearsing for their annual children’s musical, Yo, Vikings. The documentary explores the students’ drive to finish the production and, for some, the decision to join a national movement against gun violence. The film also takes viewers inside the Tony Awards on June 9 at Radio City Music Hall in New York City, where the students performed and Herzfeld was bestowed with the Excellence in Theatre Education Award.

Schatz’s previous HBO projects, which are geared toward younger audiences, include The Number on Great-Grandpa’s Arm, An Apology to Elephants, and Goodnight Moon and Other Sleepytime Tales.

While Song of Parkland centers on the students’ resolve to follow through with the production, it also focuses on Herzfeld’s inspirational teaching style.

The 74 recently spoke with Herzfeld and Schatz about Song of Parkland, which debuts on HBO at 7 p.m. ET on Thursday. The documentary will also be available on streaming platforms including HBO GO.

The interview has been edited for length and clarity.

The 74: Why did you choose to pursue this project, and to center your documentary on Melody and her students following the tragedy?

Schatz: Like so much of the rest of the world, we were inspired and moved by the voices that we were hearing from students at Marjory Stoneman Douglas High School. We knew that kids across the country were listening and watching and marching and walking out of their schools. Since I make shows for kids, we wondered if there was a story that we might tell there, and a story that would be different from what we were hearing on the news — something about and for young people.

It began with this question of, “Could we do something different? Could we tell a story that would be for a younger audience, a family audience, that would provide some kind of hope?”

I make films for HBO that feature kids speaking from the heart about life’s biggest subjects, like endangered animals, dreams, poetry, divorce, climate change, and so my thing is talking with kids, or rather listening to kids, and letting kids’ voices be heard.

The 74: What message are you trying to convey, and what do you hope that your audience, in particular younger viewers, will take away?

Schatz: One of the first things we did when we went down there is I interviewed Melody Herzfeld, and I was so struck by her and how seriously she took her responsibility to her students and to the production they were working on. In the end, I wanted to convey her incredible teaching and the importance of arts education in schools and for our young people.

For me, it was a partnership with the students and with Melody, and my job was really to listen and to hear what they wanted to say. The takeaway really came from them. It’s their story, it’s Melody Herzfeld’s story. It’s about heroism, it’s about hope, it’s about horrible, terrible things that young people shouldn’t have to experience and nobody should have to experience. But it’s about finding a way forward. 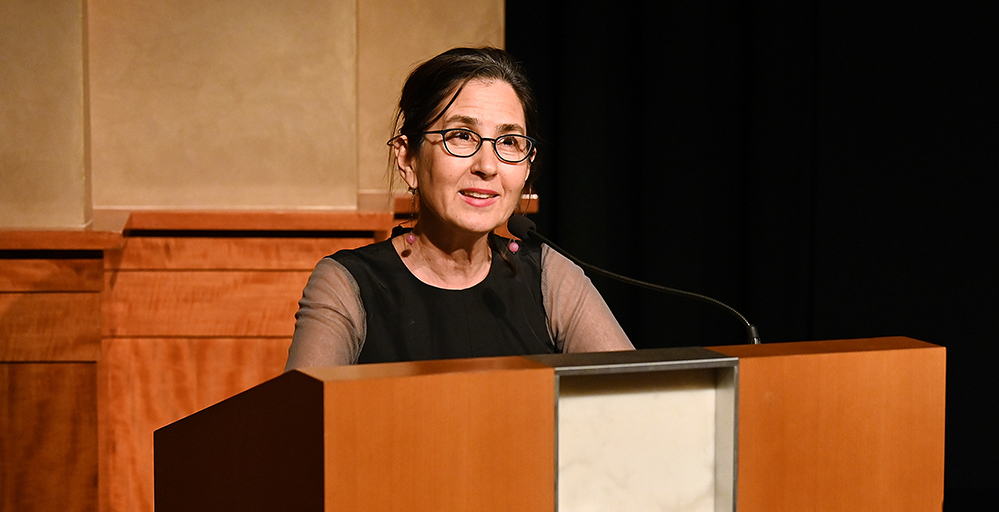 Director and producer Amy Schatz attends the premiere of Song of Parkland on Feb. 1 at HBO Theater in New York City. (Slaven Vlasic/Getty Images for HBO)

The 74: Melody, what do you hope viewers will take away from the documentary after they learn your story and the story of your students?

Herzfeld: The one thing that made me say yes to meeting Amy was that she did films for children about children, and that message was very important to me.

When I see our young kids telling their stories, I look at it from the perspective of children who are going to look up to them. As adults we can say, “Wow. We’re so in awe of these kids. We could never do this. I can’t believe how strong they were.” But when you have a child like an elementary school-age kid looking at what our students did, they can really aspire to that. They can look at them as heroes because the connectivity is so much closer.

What I was hoping is that we could show that our kids are strong and resilient, and that’s what I really trusted in Amy because it was so soon after everything happened. I was very hesitant to bring anybody into our world. It happened to be that we were rehearsing for our children’s play, so it just all made sense to tell that story to the age group of who actually comes to see our shows.

Herzfeld: There are so many messages to take away from that play and the music. This little girl has this idea that anything she learns about she wants to become. She wants to throw herself into it. It became so important to the kids to show that you can be resilient and you can overcome what people think about you and you can be different and you can be strong. That’s one of the most important messages in the play.

It was based upon a children’s book [by Judith Byron Schachner], and it is a story about Emma and what she does and how she really overcomes feeling out of place and “Where do I belong?” and then feeling welcomed back in.

It really was like coming home for us again.

The 74: In the documentary, the students talked about how they felt like they had to perform. They owed it to themselves and to the community to get up on stage, the feeling of “The show must go on.” Were there any kids who felt they were unable to go onstage and perform after all that had happened?

Herzfeld: No, not one.

We were just about at the end and I said, “How do you feel about it? Do you want to finish this? I won’t do it unless you agree.” And they all cheered. They were so happy that there was hope. Not everything is gone. It was the one thing they had to focus on that could keep them in their happy moment and say, “I’m beneficial here. I’m good in this moment.”

I think it was a very important thing to get back up on that horse, so to speak, and do what they do.

The 74: I’m curious if you had that similar drive, that the show must go on. Or did you feel any hesitation?

Herzfeld: You get strength from your students, and your students get strength from you. You get a sense of them as individuals, but you also get a sense of them as a family, as one unit. The unit was telling me, “We want to finish this, and we need you to do what you do best.” That’s my job, that’s my calling. That was my way to contribute to some of the healing that was going on at the school.

But as a whole, we are changed. This is different. We are changed people, all of us, every single person in that school that day, the community, and everybody with different levels of trauma. And it’s not over by a long shot. 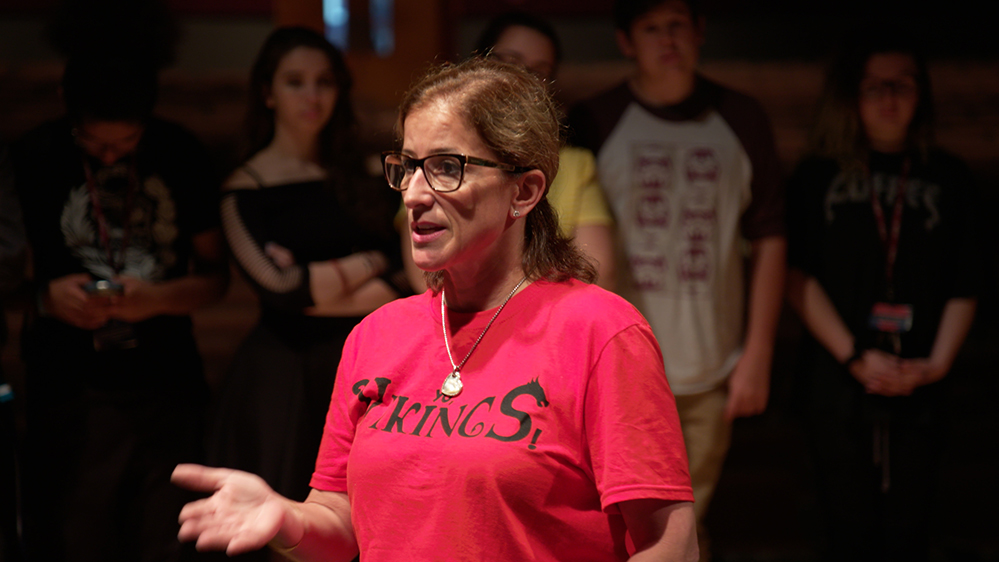 The 74: While the film centers on the students and Parkland’s drama program, you also touch on youth nationwide who marched out of their schools following the shooting. What parallels exist between the students in the drama program and the national wave of youth activism?

Remembrance Day: Ivy Schamis Was Teaching About the Holocaust When Shots Rang Out at Parkland, Killing Two of Her Students. Now the Lessons Are Deeply Personal

The 74: Your film follows people who just experienced the most traumatic moment of their lives. How did this affect your outlook? What did you learn from the students’ voices?

Schatz: I felt, when I was down there, that I wasn’t sure I belonged. I thought, “What am I walking into? This is raw. These kids have been traumatized. These people need to heal. They don’t need a camera rolling.”

We eventually worked through it and, I think, the fact that we had the cameras there focusing on their incredible talent was an extra support.

The 74: I’m curious what kind of support having a camera there provided the Parkland students?

I think it helped them, in a sense, to be able to express themselves, to know that people cared about them.

74 Interview: Criminologist Nadine Connell on Why She’s Building a 30-Year Database of School Shootings — and What Hidden Lessons May Be Found in the Stats

The 74: Reflecting back on the series of events that unfolded — from the day of the tragedy to opening night of the musical to the Tony Awards — what memories do you think will most stick with you?

Herzfeld: I think the one most important memory is them completing the show Yo, Vikings. They finished it. They were actually able to finish something that they started in the midst of this craziness.

Another very special memory was when they were singing on the stage in Radio City Music Hall and the lights came up and they looked like they were larger than life to me. I had watched those kids sing a million times, and it was like I was watching it for the first time all over again.

See previous 74 interviews: Criminologist Nadine Connell on the data on school shootings, Teacher of the Year Nate Bowling on the push to arm educators, and more. The full archive is right here.