The 74 Interview: Teacher of the Year and Gun Owner Nate Bowling on Arming Teachers & Keeping Kids Safe in School 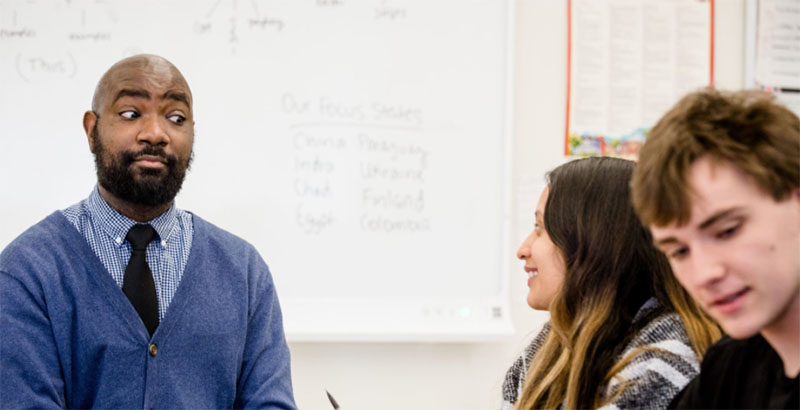 When Nate Bowling, the 2016 Washington State Teacher of the Year and a National Teacher of the Year finalist, posted some tweets identifying himself as a gun enthusiast after the Parkland school shooting, it raised eyebrows. The AP geography and AP government teacher didn’t fit anyone’s stereotype of a gun nut, and Bowling is a well-known blogger on social justice issues.

I'll add this. AK-47s and AR-15s are really fun to shoot. No, I mean really fun. But if it meant we could prevent another massacre of helpless teenagers, I'd support a ban.

But Bowling, an Air Force veteran, is into guns as well as teaching and sees some linkages between the craft involved in being successful with each. And, like many gun owners, he has views on gun policy that deviate from the gun lobby’s. I asked him some questions about firearms and his views on how to keep schools safe from gun violence.

This interview has been lightly edited for space and clarity.

T74: When did you first get interested in guns?

The first time I fired a gun was at summer camp when I was in the Boy Scouts. I fired a .22 rifle and frankly found the experience rather terrifying. The second time I fired a gun was when I joined the Air Force, in basic training, so 1998. I was not especially good at it then and also found it kind of terrifying. I didn’t really get interested in firearms, and get my own firearm, until 2011, when I became a homeowner.

As an African-American male, I have a very complicated relationship with law enforcement. And frankly, I had some real doubts about if I was in danger and police showed up at the house, whether I would be recognized as the homeowner. So, when I decided to become a homeowner, I also decided to become a gun owner. I enjoy target shooting, particularly shooting outdoors, but also indoor. I go to a range semi-regularly. I have a 12-gauge old school side-by-side break barrel shotgun. And I go out at least once a year and shoot skeet and really enjoy that.

When I shot the AR-15 or M-16 when I was in the Air Force for the first time, I found the experience rather terrifying. It’s a large gun with a large, round kind of large kickback. But as I have shot more often and more frequently, I have gotten more comfortable, and frankly, shooting guns is an enjoyable experience. I like the breath control — I like the focus. It is kind of a weird version of relaxation. And shooting larger-caliber firearms is kind of even more fun. So you get to shoot targets at increasing distances and kind of see your work.

When you are a teacher and you see a lesson isn’t working, you have to make an adjustment, and shooting is the same kind of way. When you are on a range and you are firing downrange and you see that your cluster isn’t near the target, you make adjustments. I enjoy things where I feel like I am in ultimate control, and when I am at a range, I am in control of what happens downrange. Much like when I am teaching, I am in control of the outcomes for my students while they are in the room.

Do you think teachers should be armed in school?

I think the idea of arming teachers is frankly one of the dumbest policy ideas I have heard recently. I am actually pretty disturbed by what I am see as a rightward drift in national gun policy and gun conversation. If you go back to, say, the 1970s, conservatives in California, including Ronald Reagan, supported gun control legislation. In 1994, there was a bipartisan consensus under Clinton to have an assault weapons ban, and in the 10-year period when the assault weapons ban was in place, the number of mass shootings and the lethality of mass shootings went down. That’s documented. There is a video circulating around online right now with [National Rifle Association executive vice president] Wayne LaPierre addressing a crowd, basically saying that he supports the idea of gun-free zones and of schools being gun-free zones. What has happened is that the gun debate in America has taken a giant rightward march to now where we are talking about arming teachers.

Most teachers I know can’t find their keys on a daily basis, and the idea that we are going to say to a group of adults, who we oftentimes say you can’t use the bathroom when you want to, you can’t have unfiltered internet, you can’t use the laminator — that you can bring a gun into a learning environment filled with children, it’s asinine, frankly. There have been three incidents, unfortunately, in my district in the last couple of days that have been gun-related. There were two incidents where a student called in a threat to one of the schools or posted a threat online, and there was a third incident where a gun discharged accidentally in an alternative school. And frankly, none of the situations would be solved or better off or students would be safer if there was a teacher sprinting down the hallway with a loaded firearm in their hands.

Particularly for me as an African-American teacher, I really think about, imagine a scenario when there is a mass-casualty incident and there’s chaos, and so I grab my gun and run down in order to stop the shooter. But then the police encounter me and I am armed and I am mistaken for the shooter. It is one of those things where simple solutions to complex problems often have an appeal. But frankly, this is a simple solution to a complex problem that has no appeal to me.

As a gun owner and a teacher, what safety measures do you support?

I believe that schools should be gun-free zones except for law enforcement. In my school, we have a school resource officer present in the building, and he is a welcome part of the staff as far as I am concerned. Beyond that, I think there are some very simple things we can do. If you think about the number of shooters who have been caught or stopped or apprehended when they were reloading, I know that reducing magazine size saves lives, so I would support limits on magazine size. I would also support an assault weapons ban being reinstituted. Grandfathering in existing weapons; there are already millions of assault weapons circulating in the population. Confiscation is not going to happen, but that doesn’t mean we need to introduce more. I would also support enhanced background checks that draw from available public data. There are a lot of other systems that aren’t cross-referenced into federal background checks that could be, that could provide information and save lives. We have also seen that waiting periods for people who want to purchase firearms have been lifesaving. The policy solutions aren’t really complicated. We can look around the world and see what other folks do. Commonsense gun legislation is one of the things that there needs to be a bipartisan push for. It is not a red or a blue or a D or R issue. It is an issue of safety and common sense.