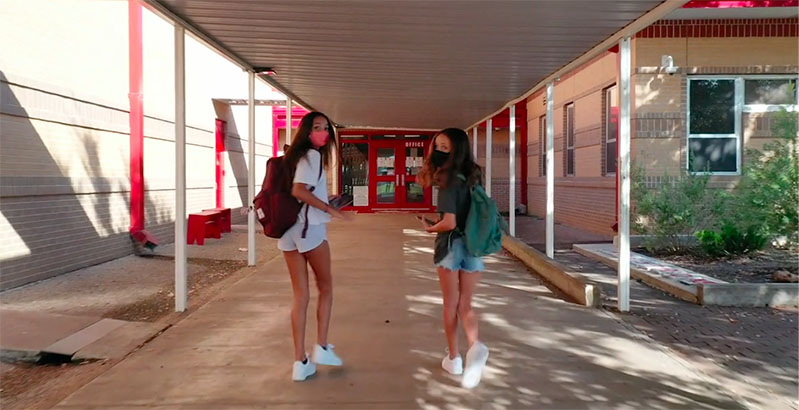 Fearing an exodus of students from Texas’s public schools and a loss of funding because of the pandemic, an advocacy organization has launched a statewide campaign to shore up support for schools with a five-figure marketing and social media campaign.

The two-minute video overlays images of empty classrooms, playgrounds and sports fields with the sounds of children laughing and teachers leading discussions. Recitations in English and Spanish play over long shots of empty hallways.

“Now, in the midst of crisis, we are reminded that public schools are the hearts and hands of our communities,” a voiceover says.

Narrating the video is Northside ISD Superintendent Brian Woods, who is worried about a possible exodus as parents fear the pandemic on one hand and prolonged virtual instruction on the other.

“I’ve been worried about this since April 1,” said Woods, who leads the largest school district in San Antonio. Right now only a tiny number of families have formally declared their intent to unenroll, but he’s concerned about the larger percentage of Northside families who have not yet indicated their fall plans.

Woods said he hears the earnest intentions of parents — some have already unenrolled their children — who say they will come back when the threat and turbulence around reopening schools buildings subsides. But every day of depressed enrollment comes at a financial cost for the school district, he explained: “If it’s the duration of the pandemic, then it could be a while.”

In addition to encouraging families to stay enrolled, in an op-ed, Raise Your Hand Texas vice president of policy and advocacy Michelle Smith urged them to reach out to lawmakers, asking that funding levels be based on enrollment from the 2019-20 school year.

“Tell them to give our schools what they need to meet students’ needs and keep everyone safe for the entire school year,” Smith writes. “If we take care of our public schools, and by extension of our communities, they will be strong enough to take care of all of us in the future.”

State Rep. Diego Bernal, a Democrat from San Antonio, said his goal in the 2021 legislative session is not just to protect public school funding but to add to it.

“I have no illusions about how difficult and perhaps even impossible that will be this session,” Bernal said. “We are in crisis mode in terms of the revenue we have to work with.”

But oil and gas have had their own troubles, serving a second blow to public schools. Experts worry that discretionary allotments created by the bill, such as the one being used to fund pre-K expansion, will be lost to budget tightening.

“While we need to shore up public education and make good on the promises of HB 3, there is even more work to do that requires tremendous urgency,” Bernal said.

As learning loss and pandemic-related expenses skyrocket, holding the budget steady would be as good as a cut, he reasoned: “Public education is a good example of how deep the hole gets when you’re trying to do everything on the cheap.”

That’s why he wants to see more conversations about new revenue streams so that his fellow legislators can consider just how far they are willing to go to help Texas recover, Bernal explained — “not just in education but with health care and damn near everything else.”

Woods agreed that the only hope for the state’s biggest budget items — public education and health care — is to consider other sources of revenue. Texas currently does not have a corporate or personal income tax. Some industries, including some professional services, also do not pay sales tax. Those conversations have been non-starters in the heavily Republican government.

“We’re morally and ethically compelled to have that conversation now,” Bernal said.