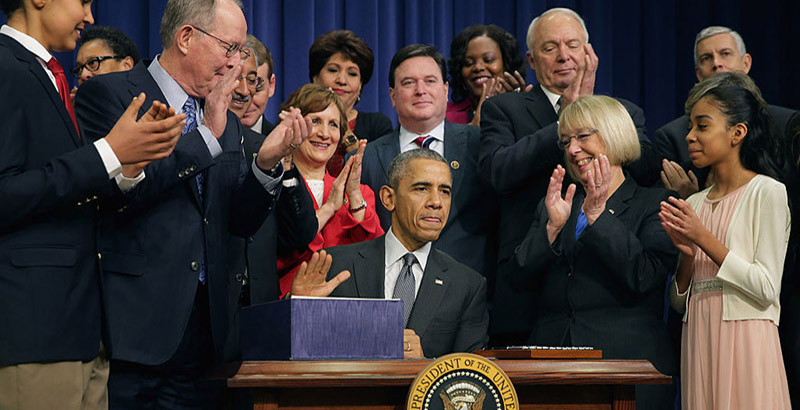 Members of Congress, education leaders, and students applaud after President Barack Obama signed the Every Student Succeeds Act during a ceremony in the Eisenhower Executive Office Building in Washington, D.C., on December 10, 2015. According to the White House, the law was intended to eliminate the “one-size-fits-all mandates” of the unpopular 2001 No Child Left Behind Act. (Chip Somodevilla/Getty Images)

Earlier this month, we celebrated the anniversary of No Child Left Behind by taking a deep look back at the landmark education bill that marked an ambitious extension of the federal role in public education. See our complete NCLB series here:

Today, we’re looking ahead to the 2018–19 school year, when the Every Student Succeeds Act evolves from planning exercise to actual policy. President Barack Obama signed the bipartisan bill into law Dec. 10, 2015, to great celebration in Washington’s Eisenhower Executive Office Building auditorium. What followed was two years of widespread debate — and, in a number of cases, scrambling on the part of state policymakers — to interpret and comply with the new law that flooded them with renewed power.

Now, as ESSA’s enforcement falls to the new administration, it’s clear that the new law is not a 2015 footnote but a 2018 test, as states will finally roll out and have to abide by their approved accountability plans. So, 16 years after the signing of No Child Left Behind and two years after ESSA’s approval, we’ve assembled an exclusive series of articles, essays, and videos to consider how American education may change during 2018:

From practice to policy: Dozens of experts from across the ideological spectrum came together last year to review all the state ESSA plans. Overall, they were unimpressed and saw most of the plans as missed opportunities to improve equity and drive improvement. But states use their ESSA plans for different purposes based on various leadership styles. So it’s wise not to be too deterministic, writes 74 Senior Editor Andy Rotherham. That’s why 2018 is when things start to get really interesting on ESSA: The state plans cease being exercises in planning and become live exercises in improving schools. Here’s what Rotherham says we need to look out for.

How ESSA shapes the zero-sum game of power: The Every Student Succeeds Act has been heralded as a return of local power after NCLB pushed authority to the feds, but calling ESSA a return to anything is a misnomer because state authority over education has never been greater than it is today, writes The 74 contributor Nat Malkus. Still, districts are the ones that lost out in this zero-sum game of power. NCLB’s legacy may not hinge on what it made, but what it unmade: local control of public schools. Before NCLB, local control was dominant, and it left federal and state governments to supporting roles. NCLB expanded the federal and state roles, and while ESSA has swung the pendulum away from federal power, the authority of states has never been greater, or more important. For better or worse, local control lost out, and that loss is likely permanent.

74 Explains — Why ESSA is a 2018 story: In a new short documentary, The 74 Video Director James Fields explores how ESSA will reshape the education landscape this year. Watch below — and then share the video right here.

Keeping accountability simple under ESSA: One theme that educators and policymakers kept returning to in interviews over the past year for The ‘A’ Word — our accountability series in partnership with the George W. Bush Institute — is that school accountability systems have grown too complex, even unfathomable. A prime example is California’s dashboard, which is muddled, messy, and virtually impenetrable to most parents. Still, the scales needs to be weighted in a manner that is clearly understandable to parents, students, and a community’s citizens. Drawing from the interviews, here are five ways to keep accountability simple.

Follow The 74’s weekly coverage of the Every Student Succeeds Act — from states’ plans to federal news to weekly debates — at our special ESSA homepage. Our weekly ESSA news roundups typically launch on Sunday nights; you can get the updates sent directly to your inbox by signing up for The 74 Newsletter.